There are various kinds of minerals in South Africa – we all know that and we all know that there were different WARS about this minerals and there are still today the same WARS, between the people and those “elites” that wanted everything for themselves.  Richtersveld area was also a land claim from the Khoi san people and that changed the property (ties) as a registered CPA (s).
Die gebiede het almal ‘n magdom en rykdom van minerale. 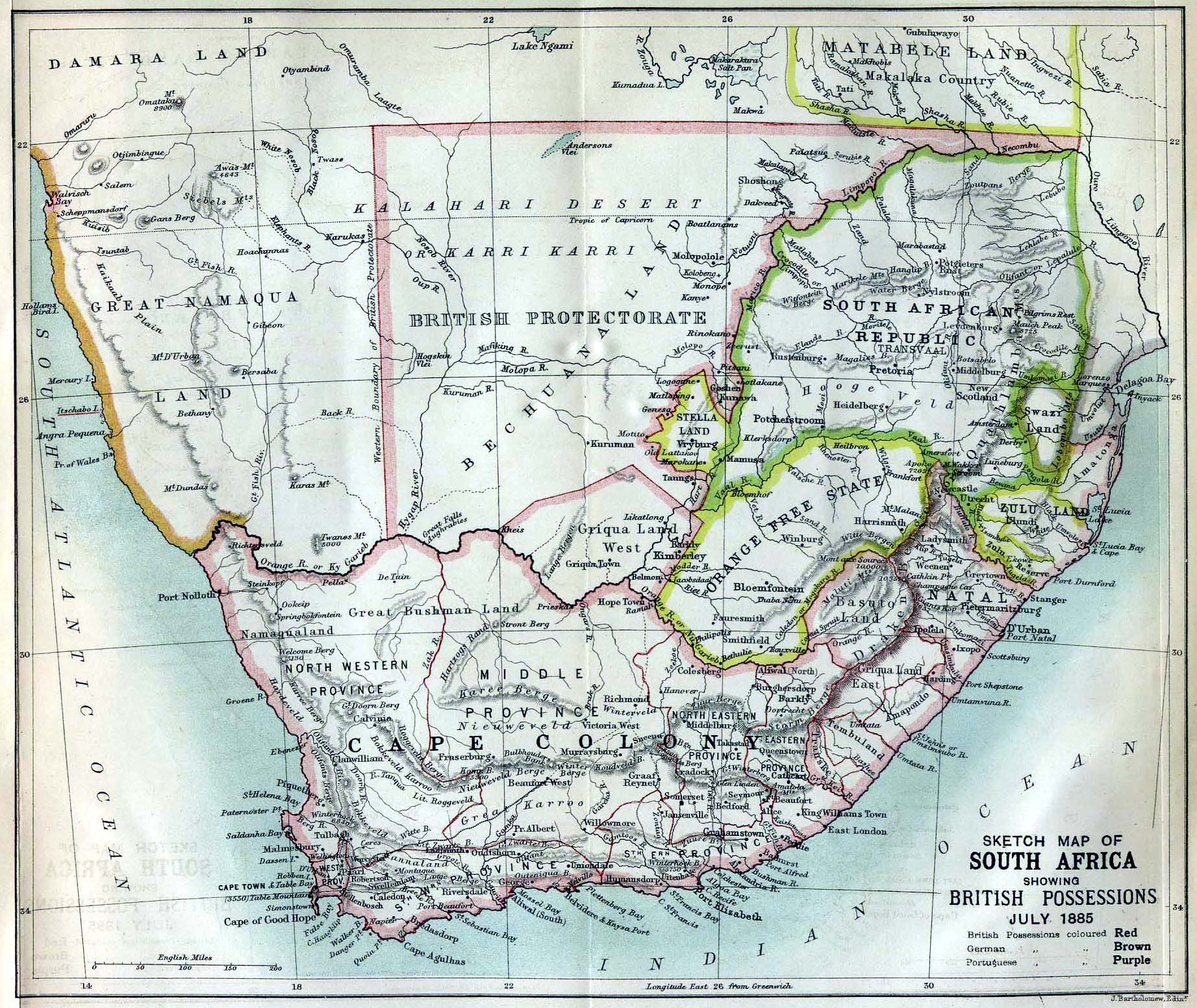 If you read the legislation of landclaims and trustlands since 1994, then the ownership is with the government and like Trustlands, the areas all are communal lands only, like the British did in 1854 with the Shepstone Policy.  British empire, with the black/brown/ khoi leaders, changed the names to “British crown lands”.   The very same happened in most Commonwealth countries under other “British rules”.   Zimbabwe and other African british colonies have the same “system” in place.

*
ALL countries decided on their own rules and legislations, the type of property rights as well.

Port Nolloth
Port Nolloth is a small town, originally built to provide an export harbour for the copper from Okiep

Deposed office bearers of a community-owned mining company in the Northern Cape have accused state-owned mining company Alexkor of exploiting divisions among community members to reassert control over shared diamond rights.   But Alexkor chairperson Rafique Bagus said that “for too long those people ran that company like their personal fiefdom” and that ousting them was a community-driven initiative to take back control of the company.

The Richtersveld Mining Company (RMC) took Alexkor to court in October 2013 over a disputed contract to reprocess diamond-rich gravel lying in dumps next to old mines in the area.

Fierce infighting had by then already erupted within the Richtersveld community’s elected structures and subsidiary companies over the leadership of the RMC.   In an area as remote and under–developed as the Richtersveld, the RMC is supposedly the jewel in the community crown.

Duncan Korabie, a lawyer representing community leaders, told RMC management that they no longer represented the company, and its Alexander Bay office was closed.

AmaBhungane discovered that Korabie had reopened RMC’s office 700km away from the Richtersveld in the Cape Town premises of DCI Holdings, a company whose executive chairperson is the ANC’s Western Cape provincial treasurer, Fezile Calana, raising fears of outside political meddling in community affairs.

Staff at DCI Holdings said that Korabie was Calana’s attorney, which both Korabie and Calana later denied.

However, Korabie has served on the ANC’s provincial disciplinary committee and last year represented ANC-affiliated ringleaders of the so-called “poo protests” who were arrested for dumping faeces on government property in Cape Town.

Korabie said: “The space I rent [from DCI] is an extension of my office, primarily used to consult with clients in the Cape Town area.”

He dismissed allegations of an ANC takeover as “nonsense” and accused amaBhungane of lacking concern for “the plight of the people of the Richtersveld”.    Calana also denied that an ANC takeover was afoot: “The offices of DCI is not used for ANC activities … DCI is a company in its own right.”

#SEGREGATION – CPA’S ARE APART FROM OTHERS

THIS WAS UNDER THABO MBEKI

In 2007, the Land Claims Court awarded the Richtersvelders mining rights, farms and property expropriated by the state during the colonial era.

For the impoverished inhabitants of this vast and desolate corner of the country, their court victory was like the promise of manna from heaven.

Under a settlement agreement, the assets would be consolidated in a multitiered community trust structure for the 2 700 registered members of the Richtersveld Sida !Hub Communal Property Association (CPA) who would elect community representatives to each entity in the trust (See graphic).

The community acquired rights to mine diamonds on the land while Alexkor retained its rights to diamonds on the seabed. Both onshore and offshore rights were pooled in a joint-venture company, owned 51% by Alexkor and 49% by RMC.

The state injected R200-million of working capital into the joint venture mining company, and a further R190-million “extraordinary reparation payment” into a separate community investment company.

But the euphoria of the settlement soon gave way to disappointment.

In October 2012, a new Alexkor board took office, chaired by Bagus.

He told amaBhungane his priority was to audit Alexkor and its subcontractors in the Richtersveld to account for taxpayers’ money.

The audit flagged “several irregularities”, Bagus said. In particular, Alexkor had no record of a decision to award the now-disputed contract to RMC to reprocess mine dumps.

Meanwhile, Bagus said that Richtersvelders had begun to complain about the allegedly unilateral way in which RMC was being run by its long-time director, Craig Matthews.

In late July, a government “stabilisation team”, including three deputy ministers, went to the Richtersveld on a fact-finding mission.

Bagus wrote to Matthews a week later: “On the recent visit of the deputy ministers … community members raised concerns about and, I quote, ‘the corporate governance of the RMC and the sudden rush to have these tenders approved ahead of the forthcoming elections in the Richtersveld’.”

One of the “tenders” was the mine dumps contract, which RMC had subcontracted to a company called Tizalux.

Bagus alleged that neither the public enterprises department, Alexkor nor the joint venture company could find records of the agreement allowing RMC or Tizalux to reprocess the dumps.

In reply, Matthews argued that Alexkor’s inability to find detailed records of these decisions was not RMC’s problem.

He supplied Bagus with a letter from Alexkor confirming RMC’s appointment to mine the dumps, an agreement with the joint venture company setting out the terms of the contract, and details of RMC’s appointment of Tizalux as subcontractor.

Matthews also disputed Bagus’s contention that the strictures of the Public Finance Management Act, which apply to Alexkor, also apply to RMC.

Another two months elapsed, during which Alexkor gave Matthews many other reasons why RMC had no right to the dumps, while Tizalux stood idly by, losing millions.

The matter came to a head when RMC and Tizalux took Alexkor and the joint venture company to court.

The written exchanges between Bagus and Matthews are included as annexures to the court papers. Matthews declined to comment, referring amaBhungane to these documents.

Bagus said that “any governance-related matters within the RMC affect Alexkor directly as [both companies are] joint venture partners. [Its] effects in any production in turn will directly affect the community”.

Bagus said the training was necessary: “It was because of lack of understanding and education that the previous CPA structure had failed … [Alexkor] could not afford to have it happen again.”

According to two sources who participated, the training was held at a plush Waterfront hotel on October 23 and 24 with Cape Town law firm KapdiTwala facilitating. KapdiTwala’s website lists Alexkor as one of several state-owned company clients.

Brian Koopman, a new RMC community director who attended, said Bagus proceeded to complain about Matthews and to lobby the group to withdraw RMC from the court case.

“We thought the training would be about the settlement agreement; we were surprised when it became about the court case,” said Ryno Thomas, another community director.

A third workshop took place in Port Nolloth on November 8, at which Koopman said Kapdi introduced Korabie as “somebody sent by Rafique [Bagus]”. Koopman said Korabie sat in and “chipped in” on discussions.

Korabie dismissed as “rubbish” Koopman’s claim that he was introduced to community representatives as an emissary from Bagus. He told amaBhungane he was appointed by the CPA as its lawyer in October.

CPA vice-chairperson Floors Strauss confirmed it had appointed Korabie, but referred all further queries to him.

Bagus said he had never met Korabie until December when the community members, whom Korabie represents, introduced them.

Kapdi said the request for Korabie to attend came from an unspecified “member of the community”, not from Bagus.

High stakes
A few days later, Kapdi also facilitated a meeting between Bagus and a representative of Tizalux in Cape Town.

Meeting records show Bagus made a proposal to Tizalux: it must withdraw from RMC’s suit against Alexkor and, in return, the joint venture company would regularise Tizalux’s appointment as a subcontractor.

Tizalux director Frank Fredericks said he withdrew because “we were caught in the middle of a fight that was not ours”.

Then came the coup. On November 22, Korabie told Matthews that he, Korabie, was acting for the RMC and its community shareholder.

Matthews had been removed as a director of the company, as had other staff members, and its offices had been “closed permanently” and relocated to Cape Town.

An accompanying shareholder resolution declared that the attorneys appointed by Matthews to fight Alexkor had been replaced by Duncan Korabie Attorneys, and the case against Alexkor would be withdrawn.

Korabie told amaBhungane this week that the office move was only temporary and was necessary to “gain control” of company documentation that outgoing staff had “refused” to make available.

Matthews has refused to go quietly, drawing Korabie’s attention to legal processes that had not been followed in removing him.

Earlier this month, the joint venture company – reconstituted without Matthews – circulated a board resolution to “regularise” the appointment of both RMC and Tizalux to mine the dumps.

But the court matter between RMC and Alexkor has not been withdrawn by Matthews and is scheduled for early February.

What happened to old homelands? or Reserves ? or British crownland
Trustgebiede>Tuislande>Reservate