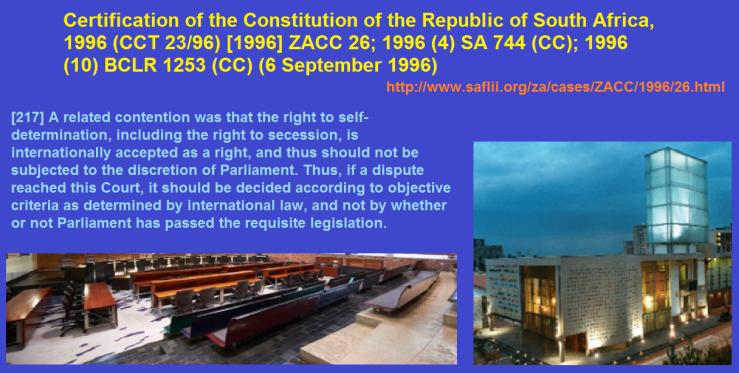 #
Wat stipuleer die Grondwet?   Eiendom sluit alles in!  Ondersoeke van parlement sluit ou Tuislande in.  Daar is egter heelwat om geregistreerde grond sedert voor 1994. Watter gebiede is dit?
Trustgebiede was voorheen Tuislande wat netso gebly het. Naamsverandering het plaasgevind. Ons dink dis net Ingonyama trust maar daar is baie meer Trustgebiede.  Khoisan burgers het 6 Trustgebiede na 1994 gekry. Parlement weet dit ook. Was al in Mbeki se tyd oorgedra.  Dit beloop miljoene hektaar grond.
*
The Constitution also makes it clear that property does not only refer to land. The model pursued by the EFF would strip all property owners of their property – white and black South Africans alike would lose everything. Homeowners would be stripped of their homes, business owners of their businesses, innovators of their intellectual property. That will effect all of us. Even trust lands were investigated by ANC government.
*
The ANC is using expropriation of land without compensation as a “convenient excuse to deflect attention away from their own agenda.”  That is nationalization.  If you take into account all the various game parks as well!  Various parks are in semi desert areas like Kalahari.
*********
Quote of various articles about land expropriation ….
LAND AUDIT
Trustlands and communal lands are nit included in the following:
The one table in the audit report shows details of what is registered at the deeds office.

Of the registered land, 96% of the land surface is covered by farms which is owned by just 6% of land parcel owners. While farmers need massive amounts of surface area to produce food and to produce it profitably, there is clearly a need to downsize the size of the farms, or break the farms into smaller pieces and allow others to own a part of the vast amount of farmland available in South Africa.
https://www.southafricanmi.com/south-africas-land-audit-report.html
///
2018
Government bought more than  5000 farms in the name of land teform.
…,

SPECIAL REPORT: The truth about land ownership in South Africa

If we collect the official numbers of land restitution and land redistribution programmes presented by Minister Nkwinti in Parliament in 2017, the following becomes evident:

• The equivalent area for which financial compensation was chosen: 2 772 457 ha

Thus, a total of 11 million hectares (ha) have been redistributed through government programmes. In addition, the State has also been buying farms and, according to recent statistics, it owns more than 4 000 farms, which presumably make up the 4,027 million ha owned by the State reported in the 2015 State Land Audit. The total land area that moved out of ‘white’ ownership through the restitution and redistribution programmes as well as State procurement or State ownership (outside the communal areas) thus is effectively 15,039 million ha.
But this is not all. Earlier results from provincial land audits, as well as research by the University of Pretoria, revealed there are also many private transactions in which black individuals have bought land from willing sellers (mainly white farmers) outside of the formal government programmes and which are not included in the data presented above (Kirsten, 2018).
https://www.google.co.za/amp/s/www.businesslive.co.za/amp/rdm/politics/2018-07-23-special-report-the-truth-about-land-ownership-in-south-africa/
Speech 2018
To date, we have settled 80 664 claims benefitting 2, 1 million beneficiaries at the cost of R40 billion inclusive of financial compensation to beneficiaries. 163 463 of these are female-headed households. To date we have restored 3, 5 million hectares of land which can be used as a catalyst to change the lives of our people who are still stuck in the second economy. Land without the requisite support fails to unlock the full value chain.

n the 2018/19 financial year, we intend to settle 1 151 land claims at a cost of R2 billion. We will also prioritize post settlement support on restituted farms, R700 million has been set aside for this purpose.

In 2017, the Double Drift Community claim was settled with the community of 1500 members, receiving 1300 hectares of land in the Eastern Cape which constitutes 21 farms and is now the Double Drift Nature Reserve. They will be piloting a game farming project.

Another one of earliest and largest land restitution claims settled is that of the Ravele community in Limpopo province. The transfer of this land was done in 2005.The Communal Property Association has since made great strides in making the land productive and thus contributing to food security in our country. The CPA continues to record profits and has been exporting their produce, macadamia and avocados amongst others, to Europe, China and other markets.

Minister of Rural Development and Land Reform Maite Nkoana-Mashabane has shed light on land ownership by her department and the Ingonyama Trust Board, in a written reply to questions from Parliament.

Other critics have queried a perceived lack of transparency regarding land owned by the Ingonyama Trust. The trust manages and sets the framework for the realisation of tenure rights to land, especially rural communities. It is also the body corporate and registered owner for various pieces of land which form the Zulu kingdom.

The Ingonyama Trust owns about 2 million hectares of land and has exclusive rights to 2 882 00 hectares, Nkoana-Mashabane said.

The Ingonyama Trust Board does not lease from the state to use or occupy either, she added.

*****
Replies to parliamentary questions posed to the rural development and land reform department (DRDLR) had revealed that the department and its entities had nearly 20.7 million hectares of land.

Minister Maite Nkoana-Mashabanl reveals that her department owns approximately 13,588,879 hectares of land and has exclusive rights to another millions of hectares of land.

The report of the high-level panel (HLP) chaired by former president Kgalema Motlanthe found that the “land area of South Africa” was approximately 122.3 million hectares.

CAPE TOWN – The African National Congress is continuing to use expropriation of land without compensation as a “convenient ruse to deflect attention away from their massive, two-decades-long failure to address land reform in South Africa”.

Replies to parliamentary questions posed to the rural development and land reform department (DRDLR) had revealed that the department and its entities had nearly 20.7 million hectares of land, DA spokesperson Thandeka Mbabama said in a statement.

The report of the high-level panel (HLP) chaired by former president Kgalema Motlanthe found that the “land area of South Africa” was approximately 122.3 million hectares.

“This information begs the question: why is the ANC pushing for section 25 of the Constitution to be amended to allow for expropriation without compensation, when government is sitting on vast tracks of urban and rural land, much of it suitable for development and/or agriculture?” Mbabama said.

“Adding to the confusion is a recent statement by the ANC secretary general Ace Magashule that we are rolling out implementation of policy of land expropriation without compensation, we are not waiting and the resolution by the ANC following the party’s two-day land summit in May that parliament must urgently pass the Expropriation Bill, ostensibly to test the limits of section 25.

“Meanwhile, the DRDLR responded to another DA question by confirming that (1) government has not determined the land that will be earmarked to be expropriated without compensation, and (2) will be guided by the outcome of the constitutional review committee which has been tasked with considering possible amendments to section 25 and is only set to report back to the National Assembly on 11 September. Confusion reigns.

“The DA believes that the ANC is continuing to use expropriation without compensation as a convenient ruse to deflect attention away from their massive, two-decade-long failure to address land reform in South Africa. Indeed, the HLP report found that increasing evidence of corruption by officials, the diversion of the land reform budget to elites, lack of political will, and lack of training and capacity have proved more serious stumbling blocks to land reform. The DA wants South Africans to be real owners of land with the right to choose, unlike the ANC and the EFF [Economic Freedom Fighters] who want the state to be landlord and the people to be permanent tenants on the land,” Mbabama said.