The British Empire is called the British Commonwealth.   They started the separate areas with the different blacks and khoisan / griqwa peoples, not us or Dr Verwoerd.  It was started after the Mfecane wars.    Rhodes believed in British Rule and the superiority of Englishman.   He was sure, that it is his God given task to expand the Empire for its glory and the good of all peoples ruled by it.

Being considered as an architect of apartheid.    Also read the Shepstone Policy of 1854. In his pursuit of this scheme, he was both incredibly successful and ruthless, which brought great deal of controversy at the height of his influence back in in Britain.    He is the ultimate representation of colonialism and played a dominant role in law restriction and marginalisation of indigenous Africans in the Cape Colony. 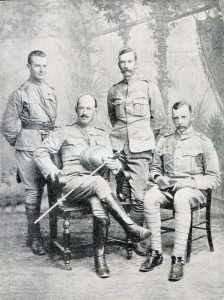 Where Did All The Boer Gold Go? For an Entire CENTURY South Africa Was The World’s Largest Gold Producer, by far, and also a Top 5 Diamond producer!     THIS Video Will Make ALL Boers and South Africans “The Moer In!” – Boer Gold in SA has been plundered for an entire century, AND STILL IS…

How much gold was discovered in Zuid Afrika and where has it all gone?

BOER GOLD: After the Boers discovered massive Gold and Diamond deposits in their two internationally recognised independent Boer Republics in the late 1800’s, the British made two attempts to annex these Boer Republics. The Brits lost the first Anglo Boer War to only a handful of Boers, great embarrassment, but finally imported 200,000 troops (total of 450 000 troops) and resorted to a Scorched Earth strategy to brutally conquer the Boer nation in 1902, killing 34,000 women & children in their newly invented concentration camps, forcing the Boer men to surrender.

…but that was only the beginning of the century long story…

The genocidal ‘scorched earth policy’ was initially introduced by Lord Roberts and later expanded by Horatio Kitchener during the Second Boer War to starve out the Boer guerrilla fighters.   In complying with this policy almost all the Boer homesteads were burned to the ground, livestock killed, crops burned and the women and children were sent to concentration camps. In the camps there were inadequate food and medical services and during 1901 about 25,000 children and 3,000 women died in these camps.

In total, more than 35,000 Boer women and children died. After the war there was an estimated tens of thousands of orphans.   This is where the word “concentration camp” was first used – in British camps that systematically imprisoned more than 115,000 people. In fact, more men, women, and children died of starvation and disease in these camps than did men actually fighting in the Second Boer War of 1899 to 1902, a territorial struggle in South Africa.   By the end of the Boer War, an estimated 46,370 civilians were dead – most of them children. It was the first time in the 20th century that a whole nation was systematically rounded up, imprisoned, and exterminated.

It was a horror that the world had never seen anywhere outside of the Bible. As one woman put it,  “Since Old Testament days was ever a whole nation carried captive?”

After the British scorched earth strategy had forced the Boers to finally surrender, a treaty was signed in 1902 called the Sand River Convention.

Clause 7 of the treaty stated that the Boers would govern themselves once again when they had recovered from the war. To this day they are still waiting for self governance! After the war however, the British flooded the Boer ZAR with Afrikaners & Africans from the Cape & Natal, & incorporated it into the Union of South Africa without a referendum!

To this very day, Boers are fighting, being killed, incarcerated & demonised as “racists” in their struggle for the restitution of their two Boer Republics!  So, when the British backed ANC said they wanted to “make South Africa ungovernable” in the violent ANC led coup d’etat of of multiple nations in 1994, was this done to preclude “self governance” being returned to the Boers?

When the British took Transvaal & Freestate from the Boers, there were only a million Africans living there…  The British imported millions to work on their newly won mines, and now over 30 million live there, many on grants, dependent on the wealth being created mostly by whites…

Is it any wonder UK “virtuously” dishes out a few million everytime a despotic Black South African leader comes begging?  But the story does not end there… Someone is stealing the gold being exported now, or at least the payments for the gold…

Rhodes has left to the diamond fields of Kimberley, where he met John X Merriman and Charles D. Rudd, the latter became his partner in establishing the world’s largest producer and distributor of diamonds.

Over the years of investments, he managed to buy all the smaller diamond mining operations in this area being mainly financed by N M Rothschild & Sons.   In 1783 he returned to England to study at Oriel College Oxford, he managed only for one term and came back to South Africa. In 1876 he has returned for his second term, but continued to prosper in Kimberley. It came to his realisation that due to the changing laws in the area, only the larger companies will be able to operate in the mines.

Together with Charles Rudd, they decided to consolidate a number of mines and bought the costly claim, the Vooruitzicht Farm, that was known as old De Beers. Named after two brothers who previously owned it.

Rhodes made an offer that his competitor Barney Barnato couldn’t resist, and eventually they launched together The Beers Consolidated Mines mining company in April 1888. the Company owned the largest interest in mines in South Africa, with its 200 000 pounds’ capital. In 1890 The London-based Diamond Syndicate entered the partnership which became strategic in acquiring the monopoly on the most of the world’s diamond supply, that led to maintaining high prices by total control of the world supply.

He became a chairman of De Beers’s 1929 and strengthened the diamond marketing monopoly.

Rhodes health worsened after the siege of Kimberly town where he was organising the defence during the Anglo-Boer war in 1899. He died in Muizenberg on 26 March 1902 at the age of 48.

He left £6 million (approx USD 960 million in 2015). Many institutions benefited. Part of the funds was used for establishing the world’s first international study programme, Rhodes Scholarship for creating an opportunity for students from British colonies, Germany and United States at the Oxford University.

There was not such a country like South Africa in 1870, only “British colonies” – Brittanica explained it as a “country”.

South Africa experienced a transformation between 1870, when the diamond rush to Kimberley began, and 1902, when the South African War ended. Midway between these dates, in 1886, the world’s largest goldfields were discovered on the  Witwatersrand. As the predominantly agrarian societies of European South Africa began to urbanize and industrialize, the region evolved into a major supplier of precious minerals to the world economy; gold especially was urgently needed to back national currencies and ensure the continued flow of expanding international trade. British colonies, Boer republics, and African kingdoms all came under British control. These dramatic changes were propelled by two linked forces: the development of a capitalist mining industry and a sequence of imperialist interventions by Britain.
https://www.britannica.com/place/South-Africa/Diamonds-gold-and-imperialist-intervention-1870-1902

“Diamonds, Gold and War: The British, the Boers and the Making of South Africa” was explained in the video,  by the speakers and it is how  South Africa became an Artificial state – Land was annexed by the British empire and not by us, or as some do believe we created that state with the Union of South Africa.

Ideal. Zimbabwe leader, Tinashe JONAS has made the shocking claim that Julius Malema’s father was an illegal immigrant from Zimbabwe which changed his name from Marema to Malema.