The San – Khoikhoi (“people people” or “real people”) or Khoi are a division of the Khoisan ethnic group of south-western Africa, closely related to the Bushmen (San). They have lived in this area for about 30,000 years.   Khoikhoi is sometimes spelt KhoeKhoe. 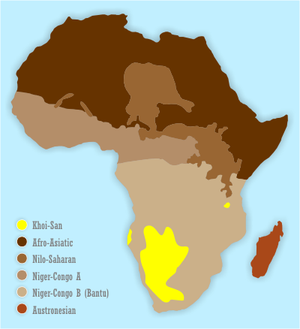 The Khoikhoi who live in Africa and in Namibia have not been there for long.

Khoisan is the name for several ethnic groups, that share some specific physical and linguistic characteristics. They seem to have a very long history in the region, where they lived until recently. They seem to have appeared in the southern parts of Africa many ten thousands of years ago.

The Khoisan languages comprise the smallest phylum of African languages. Historically, they were mainly spoken by the Khoi and Bushmen (San) people. Today they are only spoken in the Kalahari Desert in south-western Africa, and a small area in Tanzania.

The languages are becoming increasingly rare; several are known to have become extinct. Many of them have no written record. The Hadza and Sandawe languages in Tanzania are generally classified as Khoisan, but are extremely distant (linguistically and geographically) from the others. Many linguists regard the Khoisan phylum as a yet unproved hypothesis. 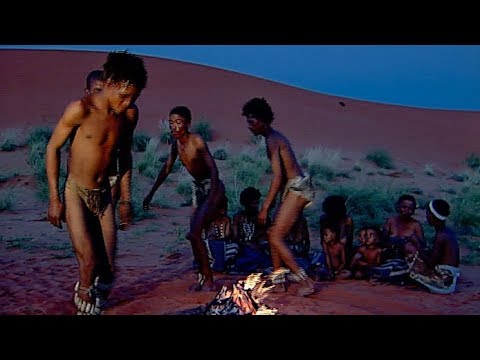 The Bushmen or San peoples of South Africa and neighbouring Botswana and Namibia, who live in the Kalahari, are part of the Khoisan group and are related to the Khoikhoi. However, they only recently have agreed on a collective name for themselves: ABATHWA. They have a manual communication system that they use while hunting. Along with the pygmies of Central Africa, the Bushmen have been considered a possible root or source for the female DNA lineage – the legendary Mitochondrial Eve.

The term “San” was historically applied to them by their ethnic relatives and historic rivals the Khoikhoi. This term means outsider in the Khoikhoi language and was derogatory; anthropologist Henry Harpending states that “in the Kalahari, ‘San’ has all the baggage that the ‘N-word’ has in America.” For this reason, many of this groups still prefer to be called Bushmen, despite the fact that the term is sometimes considered politically incorrect by Westerners

In modern South Africa, the Bushmen have largely been absorbed into the so-called Coloured or Griqua population. The Bushmen of the Kalahari were first brought to the western world’s attention in the 1950s by South African author Laurens van der Post with the famous book The Lost World of the Kalahari, which was also a BBC TV series.

The 1980 comedy movie The Gods Must Be Crazy portrays a Kalahari Bushman tribe’s first encounter with an artifact from the outside world (a Coke bottle). Since 2002, the Bushmen of Botswana are seeking legal action to prevent the Botswana government from removing them from the Central Kalahari Game Reserve, their ancestral homeland. The Bushmen are arguing that the Government of Botswana is attempting to destroy their culture through forced relocation and persecution based on their identity.

Referred to the various British Empire flags, rules – this Sheptone legislation/policy is about SEGREGATION AND APARTHEID – reserves and Crown lands.
British Empire and their colonial rules/flags