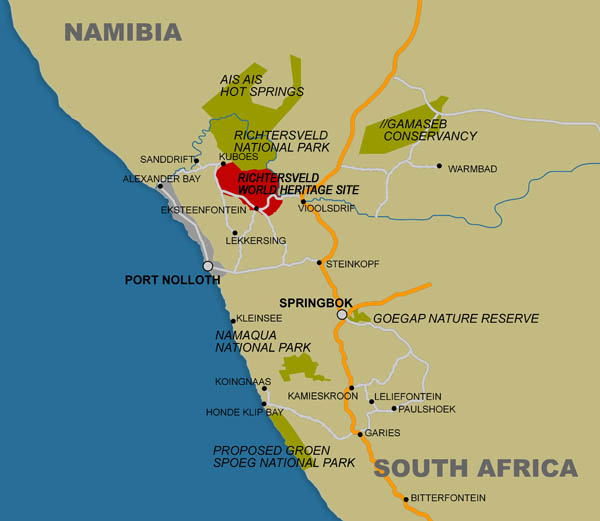 Richtersveld Communal Property Association
What compensation has been paid?

2006 – About 4 000 members of the Richtersveld community in the northwest corner of South Africa sued for R2.5bn in damages last year after the Constitutional Court ruled in 2003 that state diamond group Alexkor was mining on their land.

The whole of southern Namaqualand (also the Richtersveld) was placed under British rule through annexation in 1847.    Initially, the British Colonial Government showed no interest in the presence of the Nama tribe on the land. Later (between 1925 and 1927) a rich deposit of diamonds was discovered. By that time the British Colonial Government had been succeeded by a South African government under the protection of the Crown. It started proclaiming alluvial diggings and awarding mining rights to various stakeholders, in the belief that the land was unalienated Crown land subsequent to the 1847 annexation.

Since then, the Richtersveld people were progressively denied access to the land they previously occupied. The dispossession culminated in the creation of reserves for these people, and the establishment of the state-owned Alexander Bay Development Corporation. The latter held most of the prospecting and mining rights in the area. When it was eventually converted into a private stock company (Alexkor), the state remained its largest shareholder.  Alexkor opposed the Richtersveld people’s claim for restoration of their land.

The people of the Richtersveld initially approached the Land Claims Court for an
order restoring their ancestral lands under the Restitution of Land Rights Act.4
The Richtersveld is part of a larger area called Namaqualand, situated south of the Garib (Orange) River, and comprising about 85 000 hectares. It is valuable in mineral resources. Today, most of the Richtersveld people are resident in four settlements:   Kuboes, Sanddrift, Lekkersing and Eksteenfontein. Their ancestors stemmed from two indigenous groups of people, the (pastoralist) Khoi-Khoi and the (huntergatherer) San, who inhabited the area in nomadic fashion, long before even the Dutch colonisation of the Cape from 1652 onwards. By the 19th century, the two groups had merged into the so-called Nama tribe and incorporated others present in the area, mainly some white “trekboere” (itinerant farmers) and the so-called basters (i.e. people of mixed descent, chiefly from white fathers and San or Khoi mothers). They lived independently, under their own political management.

[7] The LCC found that the appellant’s forebears held a right in the subject land based on ‘beneficial occupation for a continuous period of not less than 10 years’ before the dispossessions relied upon, which allegedly took place after 1913 (at para 65). The LCC, however, held that any rights the appellant’s forebears might have held in the subject land were extinguished when the entire Richtersveld was annexed by the British Crown on 23 December 1847 to become part of the Cape Colony (at para 37-43) and that the land became Crown land upon annexation. The LCC further held that insofar as the appellant was later dispossessed of any rights in the subject land, such dispossession was not the result of ‘past racially discriminatory laws or practices’ and consequently not of a kind that can found a claim for restitution under s 2(1) of the Act (at para 76-96).

This Court’s principal findings are the following:

1. The Richtersveld community was in exclusive possession of the whole of the Richtersveld, including the subject land, prior to annexation by the British Crown in 1847.

2. The Richtersveld community’s rights to the land (including precious stones and minerals) were akin to those held under common law ownership. These rights constituted a ‘customary law interest’ and consequently a ‘right in land’ as defined in the Act.

3. These rights survived the annexation and the LCC erred in finding that the community had lost its rights because it was insufficiently civilised to be recognised.

4. When diamonds were discovered on the subject land during the 1920’s the State ignored the Richtersveld community’s rights and, acting on the premise that the land was Crown land, dispossessed the Richtersveld community of its rights in the land in a series of steps amounting to ‘practices’ as defined in the Act and culminating in the grant of full ownership of the land to Alexkor.

5. These practices were racially discriminatory because they were based upon the false, albeit unexpressed premise that, because of the Richtersveld community’s race and lack of civilization, they had lost all rights in the land upon annexation.

‘We have practically occupied this area for at least 80 years undisputed by anyone so fully intent to maintain our rights which by every point of law is ours. I therefore, as chairman of the Raad of Steinkopf, Kalkfontein, Richtersveld people, on their behalf humbly petition that you grant us the title of the area as claimed by us to stop any further encroachment on our ground by our government surveyor and thereby save any dispute which may arise as a result thereof.’

“In result the appeal succeeds with costs including the costs of two counsel. The orders of the LCC are set aside and replaced with an order in the following terms:

‘(a) It is declared that, subject to the issues that stand over for later determination, the first plaintiff [the Richtersveld Community] is entitled in terms of section 2(1) of the Restitution of Land Rights Act 22 of 1994 to restitution of the right to exclusive beneficial occupation and use, akin to that held under common-law ownership, of the subject land (including its minerals and precious stones);

(b) The defendants are ordered jointly and severally to pay the plaintiffs’ costs including the costs of three counsel.’”

“One of the components of the culture of the Richtersveld people was the customary rules relating to their entitlement to and use and occupation of this land. The primary rule was that the land belonged to the Richtersveld community as a whole and that all its people were entitled to the reasonable occupation and use of all land held in common by them and its resources. All members of the community had a sense of legitimate access to the land to the exclusion of all other people. Non-members had no such rights and had to obtain permission to use the land for which they sometimes had to pay. There are a number of telling examples. A non-member using communal grazing without permission would be fined ‘a couple of head of cattle’; the Reverend Hein, who settled in the Richtersveld in 1844, recorded in his diary three years later a protest by the community that Captain Paul (Bierkaptein) Links had, without the consent of the ‘raad’, let (‘verpacht’) some of its best grazing land at the Gariep River Mouth; and the trader McDougal established himself at the mouth of the Gariep River in 1847 only after obtaining the permission of Captain Links on behalf of the community and agreeing to pay for the privilege. The captain and his ‘raad’ enforced the rules relating to the use of the communal land and gave permission to newcomers to join the community or to use the land.”60

“Their Lordships desire to point out that the Treaty of Cession was an Act of State by which the British Crown acquired full rights of sovereignty over Lagos . . . The effect of the Act of State is to give to the British Crown sovereign power to make laws and to enforce them, and, therefore, the power to recognise existing rights or extinguish them, or to create new ones.”66

The Richtersveld is an area of land situated in Namaqualand, in the Northern Cape Province of South Africa, close to the border with Namibia. The Khoisan inhabited this area for time immemorial. The Richtersveld community still occupies the land in a similar way as their forefathers did. In 1847 the land was annexed by the British Crown, however the people of the Richtersveld continued to exercise their beneficial occupation, which included the right to exclude others from their land. In 1925 diamonds were found and the government claimed the land as Crown land. Since then the Richtersveld people were denied access to
the land.

In 2000 they brought their claim to the LCC in terms of the Restitution Act.  The
land claim relates to a narrow piece of land presently owned by the first appellant, Alexkor Ltd. The community claimed their land in terms of section 2 of this Act, according to this section the claimants had to prove that they had a right in land at the time of dispossession.   The claimants stated that they have (a) a right to the subject land based on ownership, alternatively (b) a right based on aboriginal title giving them the right of beneficial occupation and use, alternatively (c) a right in land obtained by beneficial occupation of the subject land for a period longer than ten years prior to the dispossession.11 The LCC held that the community did qualify  as a community for purposes of the Restitution Act, however the claim was dismissed on the grounds that the claimants were dispossessed for the purpose of mining of diamonds and not because of racially discriminatory laws or
practices.