An article in Mail and Guardian during 2019, stated that the Traditional Khoi San Leadership Act will directly affect 18-million rural people.   There are more Khoi San people today, plus the more than 25 million different black groups of the old Reserves and Homelands.    They are also living separately on CPA or Trustlands.    They all differ from each others.   The conservative Boers and Afrikaners, the White minority peoples have not the same culture, traditions, identity etc.   The names had been changed of the different areas and legislation since 1994 and under the ANC and parliament’s so-called democracy – most political parties are fully aware of this situation.  Most of them are sitting on committee meetings as well.   There are different systems as well, refer to the constitution,  like it was before 1994. 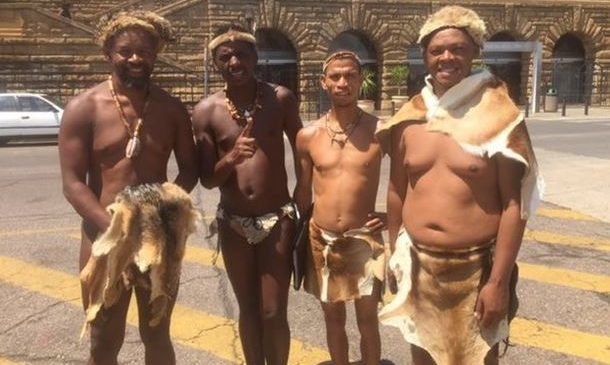 Their capacity for decision-making, for knowing what is best for their families and communities is sidelined in the name of tradition. In effect the Act equates African cultures as immutably authoritarian. Removed from the visibility of urban life, denied the privilege of their white-skinned farming neighbours, the message this Act sends to rural residents is clear: you are only as good as you are exploitable; your ideas or opinions do not matter; and your culture is to remain ossified within colonial confines. The dispossession of land and voice are indeed bedfellows.

Who are the more than 8840 traditional leaders then?

The law, which has been praised for acknowledging the independence and culture of the Khoisan, makes several provisions, including the protection and promotion of relevant institutions.  “Furthermore, the Act directs that the kingship or queenship, principal traditional community, headmanship, headwomanship and Khoi-San communities must transform and adopt customary law and customs in a manner that is consistent with the principles contained in the Bill of Rights and Constitution” , the Presidency said in a statement.   “While certain traditional structures and leadership positions have been recognised by law in compliance with Constitutional prescripts, there has never before been statutory recognition of the Khoi-San.”

Civil society had anticipated that Bill, signed in Parliament in February, would be sent back after two panel reports – one led by former President Kgalema Motlanthe and another being the president’s own Advisory Panel into Land Reform – warned that it would amount to a breach of fundamental Constitutional rights.

“The bill will almost certainly be challenged for undermining constitutional rights. If government starts to transfer the title of land from state to traditional leaders, that will also be legally challenged”, said Aninka Classens, chief researcher at the University of Cape Town’s Land and Accountability Research Centre.

Classens further adds that in light of the two reports’ recommendations, Ramaphosa had strong legal grounds on which to refer the Bill back to parliament.

Statements made in the Citizen on 29 November 2019

While a presidential statement on the Act hails it as aiding the “protection and promotion of the institutions of traditional and Khoisan leadership”, the controversial new law’s critics say it also increases the ability of government, traditional leaders and mining companies to expand at the expense of some of South Africa’s poorest communities.

It seems that the problems civil society have with the law have very little to do with its recognition of Khoisan leadership, with this aspect of it in fact widely supported by members of civil society, the Land and Accountability Research Centre’s Aninka Claasen told TimesLive.

Rather, it’s the fact that the Act applies not just to the various first nations communities which make up the Khoisan, but to all traditional leaders. And some, such as Claasen and national coordinator of the Alliance for Rural Democracy (ARD) Constance Mogale, believe it will allow these leaders and councils to sign deals with mining companies without the consent of the communities these deals will affect.

Chief !Garu Zenzile Khoisan of the Gorinhaiqua Cultural Council told The Citizen that while he felt the Act was a tentative first step towards the “recognition, restitution and restoration of the Khoi and San”, he was against the parts of it that could be abused by traditional leaders.

“The Act must never give currency to mercenary-ism,” he said.

“I don’t subscribe to certain aspects” of the Act, he added.

“We are custodians of the land, we cannot allow traditional leaders to usurp and have the powers to do what they want.”

As an example, he mentioned the Ingonyama Trust, finding fault with the fact that it had a single trustee – amaZulu King Goodwill Zwelithini.

He said the recognition that “Nguni kings and queens” receive from government was disproportionate to that of SA’s first nations people.

“The foundation people who were the first to fight the colonial laws have no recognition compared to the Nguni,” he said.

He said he would not want the Act to further the way some “traditional leaders have ignored the broader voice of the people”.

“One of the big problems of this Act is it promotes an inequality, an anachronistic hierarchy whereby things can be done without any kind of transparency or cheques and balances.

“We don’t subscribe to that. There are a lot of things in this Act that are completely wrong.

He did, however, offer tentative praise to the parts of the Act which did indeed grant his and other first nations people formal recognition, although he said the Act was just a “starting point”.

“It gives us the kind of legal traction that is required” to address what he and others see as the marginalisation of Khoi and San people, which he said included “linguistic suppression, cultural suppression, and almost complete genocide and dispersal”.

“We experienced the apex of a cultural genocide programme, when you take people called by their own name and make them others. They made us coloureds,” he said.

He said while this had its roots in apartheid and colonialism, the current government must also take some responsibility

“The current government and all its predecessors are not absolved, because we hoped that with the advent of the democratic order, these original sins would be addressed, but they weren’t,” he said.

Presidential spokesperson Khusela Diko referred The Citizen to the department of cooperative governance and traditional affairs when questioned on the more controversial aspects of the Bill.

Is Ramaphosa recognising Khoisan communities, or robbing the rural poor?

While a new law sees the formally recognising Khoi and San communities, its critics say it also opens up vulnerable communities to exploitation by mining companies.   Like the rest of us too, not only the Khoi san peoples, we all are in the same position.

Another article stated the same information about the legislation that was signed by Ramaphosa:

Ramaphosa’s office confirmed that he has signed the Traditional and Khoi-San Leadership Act into law on 29 November 2019.    The contested legislation gives statutory recognition to the Khoi-San communities, leaders and structures, and seeks to bring traditional Khoi-San institutions in line with constitutional imperatives, notably the Bill of Rights.

The Act directs that the kingship or queenship, principal traditional community, headmanship, headwomanship and Khoi-San communities must transform and adopt customary law and customs in a manner that is consistent with the principles contained in the Bill of Rights of the Constitution.”

Critics of the new law say it, in fact, disenfranchises poor communities further by placing too much power in the hands of Khoisan communities to enter into agreements without sufficient input from affected communities.

THE “Khoisan 6” camping at the Union Buildings have called for a collective conference of all Khoisan leaders, to be held on February 2 in the Catholic diocese in Pretoria.

The call comes in the wake of the Traditional and Khoisan Leadership Bill that was passed during a special sitting of the National Council of Provinces earlier this month.

The bill is aimed at giving recognition to Khoisan communities, leaders and structures, but also affects people living under customary rule in the former “homelands” created under apartheid.

But the Khoisan 6, who are strongly opposed to the legislation, said they were still demanding recognition of their culture and language from the president and government of South Africa.

They undertook a long, strenuous journey, walking from Port Elizabeth to Pretoria, and have been peacefully protesting at the Union Buildings for the past eight weeks.

They are willing to wait for as long as it takes to meet Ramaphosa.

“We delivered our demands to the then deputy president in 2017 and we are still waiting for him to respond to our grievances, which include that the Khoisan and their descendants, or the so-called classified coloured be afforded First Indigenous Nation Status,” they said.

They also want their culture and language, which they claim have been marginalised since the dawn of democracy, to be recognised.   “We want the land that was stolen to be given back to us and that the term coloured be scrapped.    “We will wait on him even if it takes a hundred years to answer to our desperate pleas,” said the leader of the group, Chief Khoisan SA.   “It is with these emotive issues which remain unresolved, that the Khoisan 6 have convened this conference in February.    “We are calling on all national and provincial Khoisan leaders to attend.”

The focus of the conference, according to the convener, Dr Leonard Martin, will be on identity, the land question, self-governance and international indigenous legislation.   “This is a very important matter. We have to unite as one indigenous nation and come up with a strategic plan to address the Traditional and Khoisan Leadership Bill and all the other outstanding issues confronting the Aboriginal Indigenous First Nation of South Africa or the Khoi-San/coloured nation.

Crown territories and Reserves did not form by themselves and even less did any Boer or whites peoples. Land and areas were occupied during 1800’s as they do it today.   Segregation of those areas were already there, they occupied those areas.   Late Dr Verwoerd or the Whites of today did not put them into small corners.   The blacks during Mfecane wars,  occupied the best land and with the most rainfail in southern Africa to themselves.   Called it Reserves or Crown land with the assistance of chiefmen and leaders.

Even today, the British empire have various annexed lands all over the globe and call them Trust or Reserves.

Commonwealth and suppression by British Colonialism

Landclaims in 2007 given to the Khoi san people by Thabo Mbeki – find it in Hansards and legislations.

More than a century ago, records were kept of all these Reserve/Location areas and their exact locations, conditions to chiefdoms. It was awarded and controlled by the British crown to black ethnic groups after the Mfecane wars.

2019 – how many genocides are there in South Africa today – we all know about the farm attacks and murders on a daily basis.