Note the real apartheid flag – where it started, long before 1900 – segregation started with the British empire under their control and flag with Rhodes and Shepstone.   …. ….   The Flag of the British South Africa Company was the flag used by the British South Africa Company (BSAC) and Rhodesia under company rule. It was adopted in 1892 and was used until 1923 when the south of Rhodesia voted to become Southern Rhodesia and the north was surrendered to the Colonial Office to become Northern Rhodesia.    … …  Dis waar apartheid begin het, by die Britse ryk onder hulle Vlag. (vlae – let wel, daar is meer as een vlag).

The flag of the British South Africa Company (with red ring) 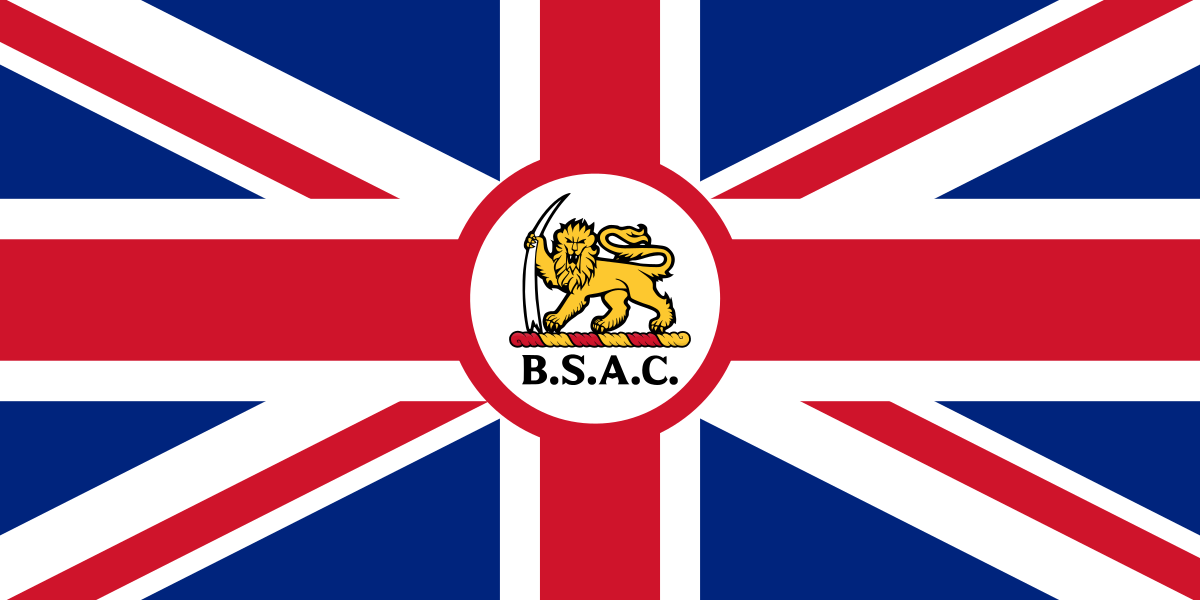 Under this flag they created Reserves and Crown land –

SEGREGATION AND APARTHEID started under British rule of Lord Shepstone 1854.

The flag remained as the Company’s commercial flag until 1965. The flag consisted of a British Union Flag with the Company’s logo of a lion and tusk on a white circle in the centre with “B.S.A.C.” underneath it.

The Pioneer Column of the BSAC set out and founded Salisbury in 1890.   The BSAC flag they had ordered to be made did not reach South Africa from England in time before the column set off.   As a result, the Union Flag was raised instead, although it had been suggested that they use a white flag with the letters “BSACo” on it.    The BSAC flag eventually arrived in the newly-established Rhodesia in 1892 and was first raised over Fort Salisbury.  In 1893, it was raised over Bulawayo, following the Company’s conquest of the Matabeleland.

The British South Africa Company was established in 1889 to explore and encourage colonisation across south-central Africa. The Company developed and administered the territory Rhodesia, now known as the Republics of Zimbabwe and Zambia. They had control over the area until 1924, when Northern and Southern Rhodesia were handed over to settlers and the Colonial Office.

Know your history and under which rule all our areas, even independent republics were annexed by the British people – they send troops to make war with Whites (Boers from the Boer Republics) and Khoi san, Griqua, Zulu and other ethnic groups.   The took control of all mines.

The crest was between two scrolls inscribed with the name of the country in both official languages, “Union of South Africa” (English) above and “Unie van Suid-Afrika” (Afrikaans) below.

WHO MADE THE RULES EVEN UNDER THE “UNION OF SOUTH AFRICA” – LEGISLATION FROM LONDON?

A plain Union Jack was flown daily from sunrise to sunset on Government House, the residence of the Governor-General.

In 1928 the Nationality and Flags Act established the practice of flying both Union Jack and South African Union Flag on Government buildings in the Union of South Africa. King George V did not want his personal representative in South Africa to fly any flag except the Union Jack.

A flag of the Governor of the Cape of Good Hope was taken into use on 12 May 1875, on the occasion of the laying of a foundation stone of the House of Parliament in Cape Town. The Governor’s flag followed the traditional pattern of having the colonial arms in the centre of a Union Jack surrounded by a green laurel garland.

“For Arms Gules a Lion rampant between three Annulets Or, on a Chief Argent as many hurts each charged with a Fleur-de-lis of the second, for the Crest – On a a Wreath of the Colours the Figure of Hope proper vested Azure resting the dexter arm on a Rock supporting with the sinister hand an Anchor Sable entwined with a Cable also proper, and for the Supporters On the dexter side a Gnu and on the sinister side an Oryx (gems buck) both proper, together with this motto “SPES BONA”.

The supporters in the arms are a Gnu and an Oryx, which hold a shield consisting of a gold lion between three gold rings.

A white panel containing three annulets appears in chief and the whole arrangement is ensigned by the Lady of Good Hope holding onto a rock with her right hand and grasping a fouled anchor with her left.

The motto on the ribbon reads “SPES BONA” which translates as “Good Hope”, whilst the red shield with three gold rings were the personal arms of Jan Van Riebeeck and the gold lion between them is the lion of Batavia.

I presume the three fleur-de-lis within the annulets recall the French “invasion” of the Netherlands, which helped to inspire the formation of the Batavian Republic, or alternately, the French Huguenots who settled in the Cape.

The flag was adopted in 1875 and abolished in May 1910 with the formation of the Union of South Africa.

Not so long ago – Cyril Ramaphosa paid  a courtesy call on Her Majesty the Queen at the Windsor Castle during a working visit to London to attend the Commonwealth Heads of Government Meeting (CHOGM 2018) taking place on 19-20 April 2018.   This is the place of “gold”.   Where did they get the gold?   Pictures of a puzzle will fit in.
British rules, Commonwealth, Trustlands

The world’s primary feudal landowner is Queen Elizabeth II. She is Queen of 32 countries, head of a Commonwealth of 54 countries in which a quarter of the world’s population lives, and legal owner of about 6.6 billion acres of land, one-sixth of the earth’s land surface. Her position is a relic of the last and largest land empire in history, rumours of whose demise would appear to be somewhat premature based on her position and possessions. But her power is real, or at least legally real, and it derives from a tradition based on a specific and unbalanced relationship between rulers and the ruled.
Commonwealth – Billionaires

Wat is in hul manifes vervat?  And they are still involved here, even on all other colonial states.   Read the Charter of the Commonwealth (their manifesto)
“British rule” Colonial rule

Kenya also have “reserves” like it was here in South Africa – 1854-1961.   Today they also have “TRUSTLANDS” like in South Africa (name change).   Land alienation in Kenya : During the colonial period, land in Kenya was divided into three parts, namely the Scheduled Areas, the Coast and the Trust Lands. The latter were also known as Native Reserves or non-scheduled areas.    Mostly communal lands.
Kenya – Trustland and british colony

In the foothills of the Maluti Mountains, Prynnsberg forms part of a string of gentleman’s country estates established for British ex-servicemen in the eastern Free State – few of them grander than Prynnsberg, the century-old home of Charles Newberry, a carpenter who immigrated to South Africa in 1864, before making his way to Kimberley where he made his fortune.
Prynnsberg – Estate of Grace

Kgosi Lucas Manyane Mangope, one of the previous Homeland leaders had ruled a showpiece state, Bophuthatswana.  Bophuthatswana was one of the 10 homelands and independence (TBVC) was part of their future with Hendrik Verwoerd’s twinkling words, “a policy of good neighbourliness” (various speeches).
Wyle Dr H F Verwoerd – 6 September 2019