There’s a tangible madness that permeates the story of Prynnsberg. But it’s more divine madness, mad genius perhaps – and one that attracts, rather than repels. In the foothills of the Maluti Mountains, Prynnsberg forms part of a string of gentleman’s country estates established for British ex-servicemen in the eastern Free State – few of them grander than Prynnsberg, the century-old home of Charles Newberry, a carpenter who immigrated to South Africa in 1864, before making his way to Kimberley where he made his fortune.

Never one to waste time, Charles cashed out, fell in love with the daughter of a Lesotho missionary and became enamoured with the natural charms of the district. He soon set out to build an English-inspired country estate, complete with manor house, outbuildings, two churches, gamekeeper’s lodge, vicarage, stables and workers’ housing.

The estate attracted famous visitors, including a neighbour, the Duke of Westminster, as well as Lord Milner and Rudyard Kipling who, it’s alleged, painted a Noah’s Ark frieze still visible in the children’s nursery.

While many of the surrounding farms were torched during the Anglo-Boer War, Prynnsberg remained unscathed because it was owned by an English family. It enjoyed a golden era throughout the early 1900s, before sliding into gradual decline under the care of the dwindling Newberry descendants.

Once alive with the cacophony of generations of a single family, Prynnsberg’s halls fell silent and the buildings on the estate fell into disrepair. That is, until along came its current owners, Johannesburg couple Rick and Sue Melvill, who were simply looking for a ‘quaint sandstone Free State farmhouse’ before walking into Prynnsberg.

It was love at first sight: no furniture but throughout a collection of plastic buckets collecting rainwater. Rick, grimacing at the memory, claims there was ‘not even a bath plug’ and so they got to work restoring and furnishing it over the years with period pieces.

But modern living calls for modern solutions. While the homestead originally offered 10 bedrooms with three bathrooms, not all of them were indoors. By losing two bedrooms and adding two conservatory-style bathrooms off the bedrooms downstairs, they were able to create eight bedrooms with bathrooms en suite, six of them with working fireplaces. And then there’s the phenomenal folly of a Victorian bathhouse with four baths, all in a row.

While its interiors are impressive, they’re not overwhelming. The space is softened by a rich colour scheme and fine architectural detail, including pressed-leather panelling, gilded cornices, stained-glass windows and ornately tiled fireplaces. Traces of earlier madness still remain though: the advent of electricity in the sixties saw complete disregard for heritage detailing. ‘Conduits were installed all over the place, flamboyantly showing off their new status,’ recalls Rick. Through its modernisation, the many mysteries of the estate, such as the smoke that used to seep out from behind the saddles in the tack room, have been resolved as simply faulty wiring and structural decay.

Even though it may be a ‘new’ Prynnsberg, Rick and Sue have really focused on returning it to its glory days. ‘We want to get the Gin Palace back into the house. The place just sparkles with people in it,’ says Rick, while pointing to the hand-painted frieze in the billiard room that bears testament to its defiant spirit: ‘Away dull care: today we will be merry!’

St. Patrick o’Shaughnessy O’Brien Daniel mentions him in his diary when he visited them in London in 1896, where they were forced to go during the Anglo Boer war due to their Boer sentiments. He wrote his life’s story in brief and a typed version of this is in the Daniel file.
……………………………………………………
Charles Newberry did take some time off his remorseless dedication to building his fortune at Kimberley.

In the late 1870s he was invited to visit Thaba Nchu by a friend at Kimberley, Tom Daniel, the eldest son of the Wesleyan missionary, John Daniel. He met there Toms sister Libby (Elizabeth Mary), who was born in 1858.

He “soon saw that she was the sort of girl I admired and I quickly made up my mind to ask her to marry me. I returned to Kimberley, but came again a few weeks later. I waited for over a year before the wedding was brought off, but most of that time I spent at Thaba Nchu.

They built the estate at Prynnsberg, and Charles Newberry was persuaded by his father-in-law John Daniel, against his own better judgement, to lend Tshipinare ¹2,000 shortly before the latters death in 1884.

Over a year later, in July 1885, just after the details of the land dispositions were published, Newberry sought President Brands personal intervention to assist him to recover the debt, as security for which he held Tshipinares certificate of title to the farm Naneng (Eden 96 and Egypte 107).
~~

It is probable that this part of Tshipinares debt was discharged by the sale of three farms Zamenloop 56, Khabanyana 57 and Morokashoek 58 from his private estate to a farmer, L.J. Coetzer, for ¹3,545 in December 1885.88

It is also probable that Newberry had impressed his anxiety for repayment of this sum of ¹2,000 upon his father-in-law, for it was Daniels evidence to Gregorowski in June 1885 that partly persuaded the judge to change his mind over the inalienability of the titles granted by Tshipinare. Clearly the certificate of title to Naneng was worthless to Newberry unless such titles could be realised in the market place. (Black Mountain – Colin Murray)

Voor en Na   BEFORE and AFTER

Prynnsberg was a manor built between 1881 and 1884 in Clocolan, Free State, South Africa by Charles Newberry (1841–1922) who immigrated to South Africa in 1864 as a carpenter to join his older brother John, mining in Greytown and eventually gained enough holdings in the Kimberly diamond mining industry to stop actively mining and build his mansion. Charles’s daughter was Winifred Brunton.

The house began as additions to the original single story farmhouse and became a three-story, 20-room manor, constructed of finely crafted sandstone in the African veld. The estate included two churches, a vicarage, a gamekeepers’ lodge, stables and various outbuildings. The house was built in old-world grandeur, becoming a national gem and, was decorated by the London firm James Shoolbred and Company of Tottenham Court Road. Prynnsberg includes enormous rooms of gold leaf and flocked wallpapers, intricate oak parquet, pressed leather panelling, rococo plaster ceilings, gilded cornices, elaborate tiled fireplaces, leaded windows and teak doors with Victorian stained glass and flamboyant friezes. Also there was a 700-Volt D.C. Dynamo which supplied power to the lathes refrigerator for the Cold Room where fruit from the orchard was stored. 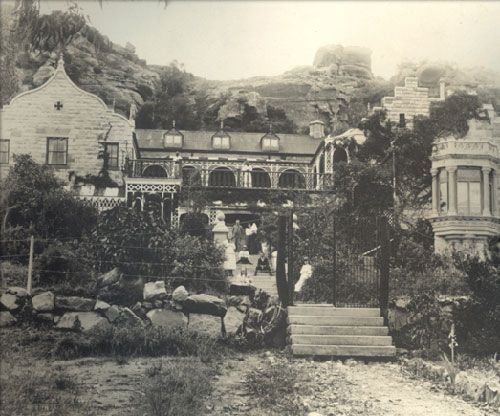 When the Kimberly Mines opened in 1872, Charles Newberry spent seven years digging in the hottest Kimberly weather for diamonds gaining enough holdings to be a shareholder in Cecil Rhodes Central Mining Company, which became De Beers. By the time Cecil Rhodes came to consolidate all the independent claims in the Big Hole to create De Beers Charles Newberry and his brother John had built up a substantial holding in “the big hole” . When Rhodes’s consolidation came about in 1879 Charles Newberry found himself free to pursue other ventures while John became a director of the newly formed De Beers. Having met and fallen in love with the daughter of a Lesotho based missionary (Elizabeth Daniel daughter of the Rev John Daniel) while on a trip through the Eastern Free State he decided to make the Eastern Free State his home and along with his new wife set about the fulfilment of his dream of creating a classic English country estate in the wilds of Africa. Having purchased the foundation of the estate from a man named Prynn he christened his venture Prynnsberg in 1881. The estate – which in its heyday covered over 20,000 hectares of land lies on the edge of the Maluti Mountains under a sandstone cliff in the Thaba Nchu District.

Approximately between 1884 and 1900, Charles and his wife Elizabeth collected local cultural art, which were housed in a private museum. Most of the items were 19th century, including arguably the world’s finest Nguni /Zulu sculpture and other Southern Bantu tribal items. The entirety of the collection came from Zulu, Xhosa, Venda, Sotho, Ndebele, Tsonga, Northern Nguni, and related peoples. The many Egyptian artefacts around the Prynnsberg estate came from the well-known English Egyptologist Guy Brunton who was married to Charles’ oldest daughter Winifred. Winifred Brunton who has also made a name for herself through her art created many murals and paintings within the house.

During Prynnsberg’s greatest years, when Charles still was head of the household, there were as many as 17 Europeans employed on the estate including a horticulturist, forester, tutor, two farm managers, stone cutters, masons and others. The estate often housed travellers of similar rank and guests such as: Lord Milner, the Duke of Westminster, President Steyn and Rudyard Kipling, who painted a frieze of Noah’s ark in the night nursery. Amazingly, during the Boer War of 1899 to 1902, when Charles and his family moved back to Surrey, England for the duration, the estate was left unharmed, amongst the other farm burnings and destruction.
*

Due to the corrupt nationalist government of South Africa, the four-generation trust of the original will of Charles Newberry was allowed to be broken.

The oldest son of the third generation, Trevor Newberry had no heir, yet instead of the inheritance passing on to the next male heir, Peter Newberry and through him, his son Robin, nationalist law caused the manor to pass back up the line to relatives of Trevor Newberry.

Therefore, the four-generation trust was broken, leaving the true heir with nothing and Sotheby’s was brought to auction everything in the bankrupt house in 1994.

The much-anticipated auction was held in 1996. Aged family heirlooms and portraits were carried off like prizes, but luckily, the over three-hundred cultural items held in the museum were purchased together by Ed Smith and shipped to a museum in San Diego before the general auction took place. The current owner of Prynnsberg, which has been restored is Rick Melvill and the estate has been able to gain back some of its charm of the old days.
*

In an attempt to save the estate for future generations Charles Newberry invoked a South African inheritance clause that left the estate to the eldest son of the fourth generation to follow him (‘fidae comissium’).

What this amounted to was that the four generations to follow him would be merely trustees of the estate – on behalf of a yet to be born inheritor.

In his own mind Charles Newberry must have thought that the extent of the wealth he would be leaving behind would be more than enough to sustain the four generations that followed. This was not the case. Elizabeth Newberry outlived Charles by some eight years. By the time she passed the estate onto their eldest son Ernest (their first born John Daniel – twin to Amie – having been killed in a World War 1 flying accident) the substantial family holding in De Beers shares was gone, as was seemingly any working capital.

Herein lies the key to Prynnsberg’s neglect over the generations that followed. Living in a vast house surrounded by the likes of Chippendale furniture and a priceless collection of art, antiques and rare artefacts but with no working capital, they found themselves trapped in a gilded cage.

Ernests’ son Edgar (second generation inheritor) was recorded to have said that he “couldn’t stand the place”. Plagued by an addiction to alcohol – like his father and mother – his son Trevor proved to be the least capable of all at sustaining any sort of control over the crumbling estate. By the time Trevor Newberry died intestate of an alcohol-induced end in the late 1980s Charles Newberry’s Prynnsberg dream lay in tatters.
https://alchetron.com/Prynnsberg-Estate