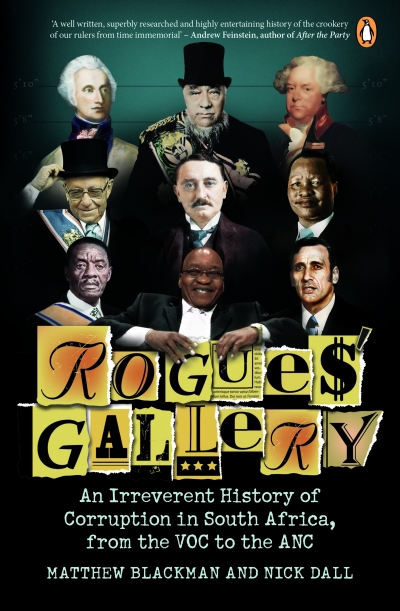 Readers are then treated to apartheid’s finest feats in corruption: from the Broederbond’s perfect ten in state capture to the Department of Information’s peddling of fake news and the apartheid state’s manufacture of – no, not illegal cigarettes – Class A drugs! And let’s not forget the hotbed of corruption that was the ‘independent’ homelands. Add to this a few murders, plenty of nepotism and a state president who started out as a Nazi spy, and the gallery of rogues is complete. On the flipside, every chapter also features at least one brave whistle-blower – the true heroes of this book.

No one can deny that the rise of Jacob Zuma to the presidency was an earthquake of an event. But one of the reasons Matthew Blackman and Nick Dall researched and wrote their new book, Rogues’ Gallery, was to show that his alleged acts were in no way new to our beloved and benighted country. (Almost) everything he did has a precedent in history, playing out over and over again throughout the decades to an almost laughable degree.

Rogues’ Gallery busts the myth that the Zuptas were the first to capture the South African state, showing that corruption has always been around.

Read an edited excerpt from the book, in which accused “Number One” finds himself facing prosecution, yet again.

With Nkandla and its firepool, chicken run, kraal, amphitheatre and visitors centre so fresh in our minds, it’s easy to fall into the trap of thinking that JZ’s KwaZulu-Natal bolthole (whose renovations cost the taxpayer over R200 million) was somehow unique. But building and/or embellishing one’s private residence at government expense is absolutely the done thing in South Africa.

Willem Adriaan van der Stel didn’t just get the land Vergelegen was built on for free, he also used company labour, materials, seed and livestock for his benefit.

Sir George Yonge didn’t last long enough at the Cape to get into farming, but he did use his time here to deck out his official residence with Moroccan leather and other accoutrements.

Lord Charles Somerset, meanwhile, built a luxurious mansion for himself in Newlands at His Majesty’s expense.

Over 300 years ago, Willem Adriaan van der Stel was described as “a scourge unto the people of this land”.

In 1800, a commission into Sir George Yonge’s conduct revealed “scandals without parallel”; twenty-five years later, a post-mortem of Lord Charles Somerset’s reign stated that “this Government is in a state of total incompetence”. Equally damning statements were made of most (if not all) of our other villains.

Cecil Rhodes was not one to bother with such trifles as free homes or farms. Instead, he got the colonial and imperial governments to pay for a railway to serve his business interests.

British horses during the Anglo-Boer wars

And while Paul Kruger lived in a decidedly modest home on Church Street, he certainly didn’t pay for it himself – it was gifted to him by a businessman who stood to gain a lot from being in the president’s good books.

After all that there came the Broederbond’s almost total control of the Afrikaans press through Nasionale Pers (Naspers, which is still around today) and Perskor. The National Party’s Broederbonders also took control of the SABC under their chairman Piet Meyer. And who can forget the case of Louis Luyt and Eschel Rhoodie, who set up the government-front newspaper The Citizen?

Eschel Rhoodie amassed a veritable portfolio of state-funded properties everywhere from Clifton to Miami and paid for his renovations with government-got cash.

And then there were the Matanzima brothers in the Transkei and Lucas Mangope in Bophuthatswana. Both pulled off the age-old trick of farming state land for personal gain.

Mangope was also found guilty of spending almost R20 million (in today’s money) of taxpayer funds on improvements to his personal residence. And then, of course, there was Wouter Basson’s R68-million renovation to the mansion in Arcadia.

Zuma has been embroiled for decades in allegations and criminal trials to do with the famous post-apartheid Arms Deal. The deal dates back to the final years of the Mandela government and has shaped much of the public discourse concerning corruption in the post-Mandela period. It is clearly a hugely important piece of South African contemporary history. Amazingly, Thales (formerly Thomson-CSF) still stands accused, after twenty years, of agreeing to pay Zuma R500 000 annually for protection from an investigation into a $2-billion arms deal.

But we should not forget that during apartheid, arms deals were ten a penny. While there’s no way of knowing which members of the apartheid government benefited financially (the records were conveniently destroyed), they certainly got what they wanted, as did the criminals who sold them the military hardware. And as we’ve seen, Wouter Basson appeared to be up to his neck in arms deals – they just happened to be of the chemical and biological variety.

But there is another point to be made here. As the academic Jonathan Hyslop states, the “striking feature of the [Arms Deal] affair is that it demonstrates the emergence of a confluence of interest between new and old elites, in this case between the military-industrial complex of the old regime and the leaders of their former guerrilla opponents”.

BKS, an engineering company that had “impeccable Broederbond heritage”, according to Noseweek, and African Defence Systems (ADS), the leading military electronics firm of the PW Botha era, were involved in the deal. During the mid-1990s, ADS was sold to Thomson-CSF, which had links to Schabir Shaik’s Nkobi Holdings.

The Arms Deal also had another link to apartheid. As Paul Holden and Hennie van Vuuren point out, the Auditor-General’s Act of 1995 “incorporated the original apartheid legislation” known as the Special Defence Account Act.    With this legislation in place, both the apartheid government and the post-apartheid government were able to censor any report by the auditor-general.

When it was revealed that Zuma’s favourite family, the Guptas, had essentially been gifted a huge coal contract with Eskom, the country was shocked. Eskom’s decision to give Gupta-linked Tegeta R659 million up front for “the sale” of coal not yet produced or delivered so that they could buy out Glencor (which held the Eskom contract) will hopefully end up in court one day.

But as we’ve discovered, the Broederbond (Afrikanerbond) also made a habit of handing Eskom coal contracts to their mates, so the Tegeta affair was no light-bulb moment for Zuma. To be fair to all parties, though, the apartheid government did oversee Eskom’s total generating capacity increase from 1 217MW in 1945 to 3 297MW in 1959 – a growth of 170 per cent in fourteen years. Under Zuma, Eskom’s output capacity declined from 239 108GW in 2008 to 221 936GW in 2018, a lot more than can be said of Lucas Mangope’s power plant, which never produced a watt!

Allegations revealing Zuma’s systemic capture of state organs may be one of the most shocking tragedies to befall our nation. During Zuma’s reign, the NPA, the South African Revenue Service (SARS), the Directorate for Priority Crime Investigation (Hawks), the SABC and Eskom all appear to have come under the collective control of Zuma’s patronage circle, known as the Zuptas.

Zuma’s attack on the NPA, interference in the duties of the police and what was called his “Stalingrad approach” in the court cases against him have threatened and hollowed out our democratic institutions. Zuma has often been quoted saying that he desperately wants his day in court, but as Andrew Feinstein told us, “he has spent untold millions avoiding his day in court or at a commission”.

However, Zuma was not the first to employ such tactics. At the tribunal into his own conduct, Willem Adriaan van der Stel kept track of judicial proceedings against from behind a thin door. While Somerset and his fiscal, “Dog Dan” Denyssen, were wedded at the waist, Rhodes had an equally evasive and constipated approach to the handling of evidence in the courts. And Kruger barged into his prosecutor’s bedroom to shower him with legal opinions and desires (as well as sputum) when he wanted to get his way in the courts.

The apartheid government went further and stacked the courts with their own judges to a degree that makes Zuma look like a novice. At least when Zuma came to setting up a commission of inquiry, he was forced to make it open to the public. When Verwoerd was cornered into setting up a commission, he pushed legislation through Parliament so he could make it a secret one. Not that Zuma didn’t have similar hopeful desires .

And when PW Botha found out that Judge Mostert’s commission looking into the Information Scandal was acting independently, he dropped it like a hot braaibroodjie.

The Groot Krokodil then set up the Erasmus Commission, which rushed through its work and found largely what PW wanted it to find.

Kruger, meanwhile, did one better after his controversial victory in the 1893 election, setting up a commission which “regarded speed as the essence of its task” and took only three days to find in Oom’s favour!