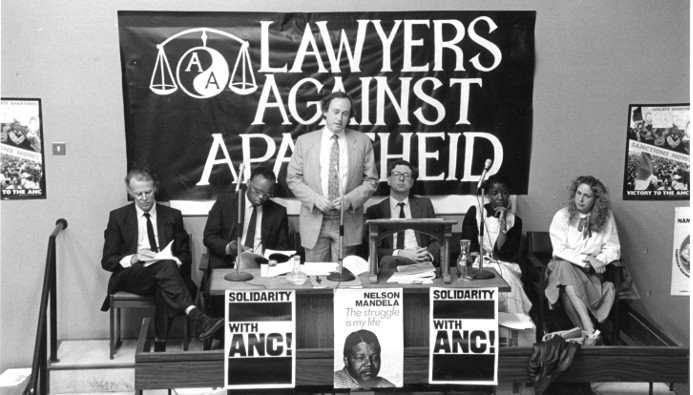 Lawyers Against Apartheid was formed following a legal conference in December  1986  to mobilise the support of the legal community in Great Britain for the liberation struggles in South Africa and Namibia. Membership was open to all members of the legal community in Britain, including practitioners, academics, students and legal workers. The group was affiliated to the Namibia Support Committee, London, and the Anti-Apartheid Movement with whose guidelines for Local Groups it adopted for governing the conduct of its activities.

Healthworkers, architects and lawyers all set up groups to raise awareness of the impact of apartheid in their own professional areas. They campaigned to end the links between British and international organisations and whites only bodies in South Africa. As resistance to apartheid grew, they supported their South African colleagues in their fight against racial segregation.

Healthcare under apartheid was grossly discriminatory. The AA Health Committee’s newsletter Health and Liberation exposed the huge gaps in life expectancy between blacks and whites and the widespread malnutrition among black children.

The Committee took up the case of Maggie Jones, banned from the European Paraplegic Table Tennis championships for distributing anti-apartheid leaflets. In 1985 South Africa was suspended from the Stoke Mandeville International Paraplegic Games.

Architects against Apartheid ran a long campaign to persuade the Royal Institute of British Architects (RIBA) to sever its links with all-white architectural institutions in South Africa. It persuaded RIBA to withdraw recognition from segregated architectural courses at South African universities. From the late 1980s, the group worked with colleagues in South Africa to plan for a post-apartheid built environment.

From 1987 Lawyers against Apartheid exposed the abuse of the legal system in South Africa. The group supported prisoners in political trials and opposed the use of the death penalty. It also advised anti-apartheid activists in Britain on their right to protest.

The 1988 conference on Children Apartheid & Repression in Southern Africa led to the setting up of new professional groups to campaign against apartheid. Teachers, social workers and youth workers all looked at how they could contribute within their professions to the ending of apartheid. 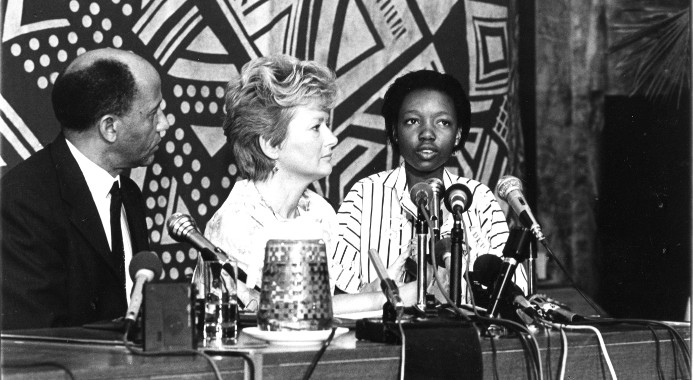 In September 1987 an international conference in Harare heard testimony from children who had been tortured by the South African security forces. Over 200 health workers, lawyers, social workers and representatives of other professional groups met children from within South Africa. In the photograph Glenys Kinnock listens to one of the witnesses. Copyright © Pieter Boersma

Over 20,000 mayors from 56 countries signed a declaration calling for the release of Nelson Mandela in 1982. The Declaration was initiated by the Lord Provost of Glasgow, Michael Kelly, after Glasgow conferred the Freedom of the City on Mandela. This booklet lists the mayors who signed the Declaration.   https://aamarchives.org/archive/history/boycott-movement/mda38-mayors-declaration-for-nelson-mandela.html

Leeds City Council formally welcomed ANC representative Ruth Mompati to Leeds in the winter of 1982. In the picture with Ruth Mompati is the Deputy Lord Mayor Rose Lund. The Council named the gardens in front of the Civic Hall the Nelson Mandela Gardens. Leeds was one of many local authorities to show its opposition to apartheid in the 1980s.
https://aamarchives.org/archive/who-was-involved/local-authorities.html

WHERE IT STARTED …  SHEPSTONE

“Native policy” in pre-Union Natal has been described as “embalmed Shepstonism plus acquisitiveness”. In the 1870’s the Shepstone policy had become a fixed tradition. It amounted to the segregation of the Africans in scattered Reserves, under the rule of Chiefs; the encouragement of the tribal system; the recognition of tribal customary law; amd the discouragement — or at best the somewhat reluctant tolerance — of the spread of white civilisation among them. This, we may say, is the basis of Nationalist policy, but Nationalism is more liberal than Shepstonism: Sir Theophilus never envisaged a University of Zululand.

One of the main points which comes out of this study — perfectly valid if not of the first importance — is that apartheid is neither an Afrikaans nor a Nationalist discovery. It originated in English-speaking Natal; it was frequently approved by the Colonial Office; Rhodesia consciously borrowed it from Natal. Even the Milner Commission of 1903-5 reported in favour of separation in land ownership and separation in the franchise, and provided the basis for the Natives’ Land Act of 1913 and General Hertzog’s Representation of Natives Act of 1936. The cause of Liberalism is not advanced by presenting it as the English reaction against Afrikaner obscurantism.

It is not quite fair to put all the blame on to Natal. The system of Reserves began in the Cape sixteen or seventeen years earlier than in Shepstone’s Colony. Even the muchlauded Transkeian system was based on territorial separation. But the later Shepstone policy was more thoroughgoing than that of the Cape, more lauded (not least by the Colonial Office) and more systematised.

It must be * remembered to Sir Theophilus’s credit that when he first recommended the placing of Africans in Reserves he coupled with this the recommendation that missionaries and educational institutions should be encouraged in each Reserve.

It was only when all monetary aid was refused him that he fell back on the tribal system. Not only missionaries but magistrates were refused him: he had to resuscitate and encourage the tribal system in order to have government at all.
Out of his improvisations, both brilliant and necessary, he and others built a theory. The second-best became the ideal.

The great Karl Marx once said of himself, in one of his all too rare moments of humour: “I am not a Marxist”, but Shepstone never seems to have said, “I am not a Shepstonian”.

By the time of the annexation of the Transvaal in 1877 he had come to believe blindly and deeply in the “Shepstone policy”.

In the early years of Natal’s existence as a Crown Colony the elected members of the Legislative Council were to a man against Shepstone: in the 1870’s they were all for him.

No one will accuse Bishop Colenso of being a reactionary. More than any other early Natalian he strove for the education of the Zulus. In the earlier years of his episcopate he was the close friend and admirer of Theophilus Shepstone. From the time of the Langilabalele episode (1872) he became Shepstone’s unsparing critic.

AND AFTER 1994, IT IS STILL THE SAME WITH TRUSTLANDS AND CPA’S.
https://www.sahistory.org.za/sites/default/files/DC/remar73.4/remar73.4.pdf

It is so easy to blame other people for racism and discrimination, especially the “passbook” and other legislations before 1961.   When you listen to Dr Verwoerd on his videos and different speeches it was not called “apartheid” but good neighbourliness.      When Dr Verwoerd took over in 1961, those separate areas were already in place in the form of RESERVES and BRITISH CROWNLANDS.   Those areas were not created by the whites after 1961.

As previously stated, Apartheid was created during the British colonial rule by them and the different chiefs in southern Africa in 1854 (Shepstone Policy) , just after the Mfecane wars.   It was not Dr Verwoerd’s regime that implemented segregation under Black and Khoisan peoples or whites.  How could he do that if it was already in place?   There was  also two independent Boer republics that the British annexed with two Anglo Boer Wars and all the mines in South Africa.  And was that legal to came from England to do that to all of us in South Africa?

If we go their to UK or Europe, what will happen to us, if we annex their land and countries for us?   Can anybody go to Russia or America and annex their countries – sure not?   British empire could not wait to rule this country and the minerals for various reasons.

After 1902 the British started to make use of cheap labour of Africa and China – and more than 400 000 came and work here to South Africa to work in the mines for them, not for us.    The ruler was in England.   Most of those immigrants living around gold and diamond fields – conveniently.   Later those mine workers also wanted to vote in SA but they also have countries of their own.

During Verwoerd’s time it was well documented that all those Homelands did elections and make their own choices, each with their leaders.   Homelands also have their own flags and national songs and were on its way to full independence.   Some of them have a army and police system in place.     They all have schools, border industries and work employment,   More than 18 million people were living in those Homelands,

It is still the case today, after 1994.  Segregation is not gone.    During Codesa the Zulu leaders decided to keep their Zululand (homeland) and in 1994, it was changed to Ingonyama Trustland, only for the Zulu people with own legislations.   FW de Klerk signed the legislation.

Since 1994, ALL landclaims were registered under CPA legislation and were also separated from each other – the white minority people are all excluded from that areas and legislations.   It is still the case.

In 1995 Ramaphosa started the BEE – EE and B-BBEE legislations, more than 150 legislations against only the white minority people and their businesses, as well sport quotas.

The Khoisan peoples received their landclaims also after 1994 and also received millions of hectare of land from Thabo Mbeki in 2007 – most of those CPA’s are well financed by the ANC or their liberal / classical sponsors after 1994 – like George Soros.   Most of those landclaims from Khoisan and Griqwa were called British Crownland, like the Richtersveld.

A White paper of parliament also explained that more than 25 million Khoisan and Blacks are living on Trustlands and registered CPAs.   There were 8840 traditional leaders in 2019 – all well paid, only for Khoisan and Black groups.   Whites are excluded and that is also racism and discrimination.