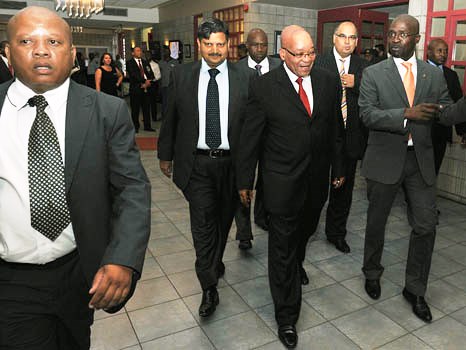 The “agendas” around corruption in South Africa are not just about what happened during the Zuma’s period when he was “president”. It had originated before him and after 1994. Who was with him and others in this nest.   Has enough action been done towards everyone who contributed to this chaos and economic revolutions?

Where have all the billions from the state coffers and hijacking been channeled to and who controls those billions of rand today at the back of their “corruption curtains”?    It is certainly not white monopoly that benefits from black empowerment. For a long time, the beneficiaries are not just whites as we experienced before 1994 with the NP or Broederbond aka Afrikanerbond handshakes (after and since the Anglo Boer Wars, as well as the mineralts that have been annexed).

Cope – Political parties are reacting to former president Jacob Zuma being granted parole. The Department of Correctional Services says it was compelled to do so based on a medical report it received.

Cost of Corruption in South Africa

2012 – Andrew Feinstein, author of After the Party – corruption and the ANC on: who got paid off in the arms scandal and why; how the pay-offs were handled; Jacob Zuma’s role in the affair; and the collapse of the Parliamentary investigation.

2011 – Andrew Feinstein, a former ANC Member of Parliament and author of a new book on the arms trade discussed the inner workings of both the formal and illicit trade in weapons — as well as the links between the two.

Is daar meer as dit hieragter …

A Parliamentary Portfolio Committee has declared the decision to naturalise members of the Gupta family as “invalid”, with specific reference to the status of Ajay Gupta. Ex-Home Affairs Minister Malusi Gigaba was found to be “incorrect” when he pushed ahead to grant South African citizenship to the family members.

2017 (Hansard)
Mrs Angoori Gupta – long discussion in Parliament
He explained that Mrs Gupta, the mother of Ajay Gupta, had arrived in South Africa in 1995 and had held a permanent residence visa, as did the other members of the family who had arrived in the country later. The members of the family, Mr Ajay Gupta, the wife, Mrs Shivani Gupta, mother, Mrs Angoori Gupta, the sons Mr Kamal Kant Singhala and Mr Surya Kant Singhala, had applied for citizenship as a family unit, which meant that if one or more members of the family did not qualify for naturalisation, no one in the group could receive naturalisation.   Read more:
https://pmg.org.za/committee-meeting/24687/

According to Atul Gupta, he met South African President Jacob Zuma in 2002/03 during one of Sahara’s annual functions where Zuma was a guest.    Rajesh, the younger Gupta brother who came to South Africa in 1997 to join the family business, is a “very close friend” and business partner of Zuma’s son Duduzane.   One of Jacob Zuma’s wives, Bongi Ngema-Zuma, worked for the Gupta-controlled JIC Mining Services and Duduzile Zuma, his daughter, was a director at Sahara Computers.   Duduzane Zuma, his son, is a director in more than one Gupta-owned companies.
Read more:
https://www.indiatoday.in/fyi/story/gupta-brothers-jacob-zuma-south-africa-saharanpur-business-15834-2016-06-23

Ashu Chawla, a co-accused in the Estina Diary Farm corruption case and a key witness in the South African government’s inquiry into the naturalization of the Gupta family, has left the country while on bail, leaving officials in a tizzy.

Chawla, who was born in India, has been a South African citizen for 17 years. He is alleged to be the mastermind who arranged South African citizenship for the Guptas. He is believed to have fled the country last week after he was summoned to testify on the issue involving the controversial family, accused of state capture in South Africa.

The South African parliament’s Portfolio Committee on Home Affairs is investigating how members of the Gupta family were granted citizenship even though they did not meet the requirements, the Business Live daily said, adding the department had rejected applications for five Gupta family members. The naturalization for Ajay Gupta; his wife, Shivani; his mother, Angoori Gupta; and his two sons, Kamal Kant Singhala and Surya Kant Singhala, was granted after Chawla appealed to Home Affairs Minister Malusi Gigaba on behalf of three of them for approval of the naturalization on account of “exceptional circumstances,” local media reported.

RELATED …  Was he the only one involved?   He was the “president”.