Gold and diamonds.    The British South Africa Company (BSAC or BSACo) was established following the amalgamation of Cecil Rhodes’ Central Search Association and the London-based Exploring Company Ltd which had originally competed to exploit the expected mineral wealth of Mashonaland but united because of common economic interests and to secure British government backing. 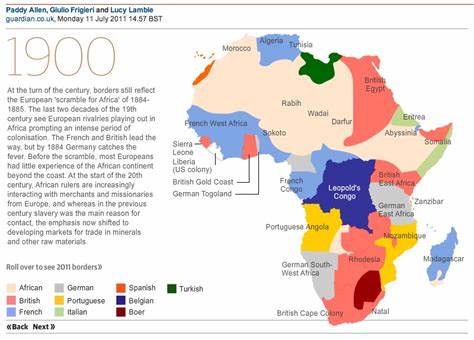 The company received a Royal Charter in 1889 modelled on that of the British East India Company.   Its first directors included the Duke of Abercorn, Rhodes himself and the South African financier Alfred Beit.

Rhodes hoped BSAC would promote colonisation and economic exploitation across much of south-central Africa, as part of the “Scramble for Africa”.

However, his main focus was south of the Zambezi, in Mashonaland and the coastal areas to its east, from which he believed the Portuguese could be removed by payment or force, and in the Transvaal, which he hoped would return to British control. It has been suggested that Rhodes’ ambition was to create a zone of British commercial and political influence from “Cape to Cairo”, but this was far beyond the resources of any commercial company to achieve and would not have given investors the financial returns they expected.

The BSAC was created in the expectation that the gold fields of Mashonaland would provide funds for the development of other areas of Central Africa, including the mineral wealth of Katanga. When the expected wealth of Mashonaland did not materialise and Katanga was acquired by the Congo Free State, the company had little money left for significant development after building railways, particularly in areas north of the Zambezi. BSAC regarded its lands north of the Zambezi as territory to be held as cheaply as possible for future, rather than immediate, exploitation. As part of administering Southern Rhodesia until 1923 and Northern Rhodesia until 1924, the BSAC formed what were originally paramilitary forces, but which later included more normal police functions.

This is a 1940s travelogue about Rhodesia and South Africa, which features many of the landmarks, including Johannesburg, and the railroads built by Cecil Rhodes. This film is part of the Periscope Film LLC archive, one of the largest historic military, transportation, and aviation stock footage collections in the USA.
Gold and Diamonds in Colonies.

Read again the information regarding Rhodes … about segregaton and the “pasbook”.

Furthermore, segregation (separate areas – apartheid) was there before 1850 (Mfecane wars).  It later became homelands and british crown lands (all after 1840 under BRITISH rules).    Shepstone Policy.

Then during Kodesa some areas became Ingonyama Trustland (for Zulu people only) (legislation) and in 2007 various landclaims became registered CPAs (legislation) under Thabo Mbeki. More landclaims followed since 1994. All apart from each other.   More than 8840 traditional leaders.

Before 1900 there were more than more than 2000 homelands in Africa – and most of the African  tribes mostly are still there, ruling by their own leaders.   With our 10 homelands (1961-1994) there were elections too, etc.
Tuislande “so-called apartheid” – Homelands

The so-called apartheid system, (1961-1994), was created by British colonial empire in 1840-54 with the assistance with most of the Black and Khoisan chiefsdoms during that time.  Was not created by Dr Verwoerd, it was already there.   Also, not in the rest of Africa.   During 1900 there were other homelands in Africa as well, not created by us in the Transvaal oor Freestate or RSA.

ROOTS OF SEGREGATION AND APARTHEID

AFTER 1994 – all those areas became Trustland and registered CPA’s.

Goud en diamante – Anglo War – Gold and Diamonds
Diamonds, Gold and War: The British, the Boers and the Making of South Africa