The White Paper on Traditional Leadership and Governance, July 2003, issued by the Minister for Provincial and Local Government deals with certain aspects, like the various international agreements, as well as the historical traditional leadership,  the old homelands and what happened after 1994.   Please read the documents, White Paper and information here as well.

Refer to statements that was made regarding “title deeds” in South Africa – there are millions of title deeds – who is landless – do not lie about the realities in South Africa.
Die 7.6 miljoen swart titelakte houers

The 2003 document stated that each traditional community was an entity and independent from the others.   Such communities did not constitute a nation state as we understand it today.  Prior to colonial invasion, these societies comprised structures and hierarchies stemming from a social organisation that was defined by family and kingship ties.

Expropriation and the so-called “rainbow nation”

Back economic empowerment – B-BBEE or BEE and Expropriation of land and all other properties.   Expropriation included all properties, land, equipment, shares, salaries, everything.    When FW de Klerk and Mandela / Tutu called us a “rainbow nation” it was false, because there is no rainbow nation in South Africa.
Swart bemagtiging/onteiening

3.1 Background to Traditional Leadership and Governance

The institution of traditional leadership has, over the years, performed various  governance functions. These governance functions were not exercised in a unified territory, as this only came about later with the formation of the South African nation state.

The following are the relevant agreements that South Africa has either ratified or
acceded to:

(a) International Covenant on Economic, Social and Cultural Rights of 16 December 1966

South Africa signed this Covenant on 3 October 1994. It provides, among others, in Article 15, that states should recognise the rights of everyone to take part in cultural life.

Article 17 of the charter provides that every individual may freely take part in the cultural life of his/her community and that the promotion and protection of morals and traditional values recognised by the community shall be the duty of the state.   The charter also obliges the individual to preserve and strengthen positive African cultural values in his/her relations with other members of society and, in general, to contribute to the upliftment of the moral well-being of society. This is to be done in a spirit of tolerance, dialogue and consultation. It obliges him/her to contribute to the best of his/her abilities, at all times and at all levels, to the promotion and achievement of African unity.

Article 22 of the charter also provides that all peoples shall have the right to their cultural development with due regard to their freedom and identity and in the equal enjoyment of the common heritage of humanity.

(c) The Universal Declaration of Human Rights of 10 December 1948

This declaration binds all members of the United Nations, of which South Africa is a member.

Article 27 of this declaration gives everyone the right to participate freely in the cultural life of the community. 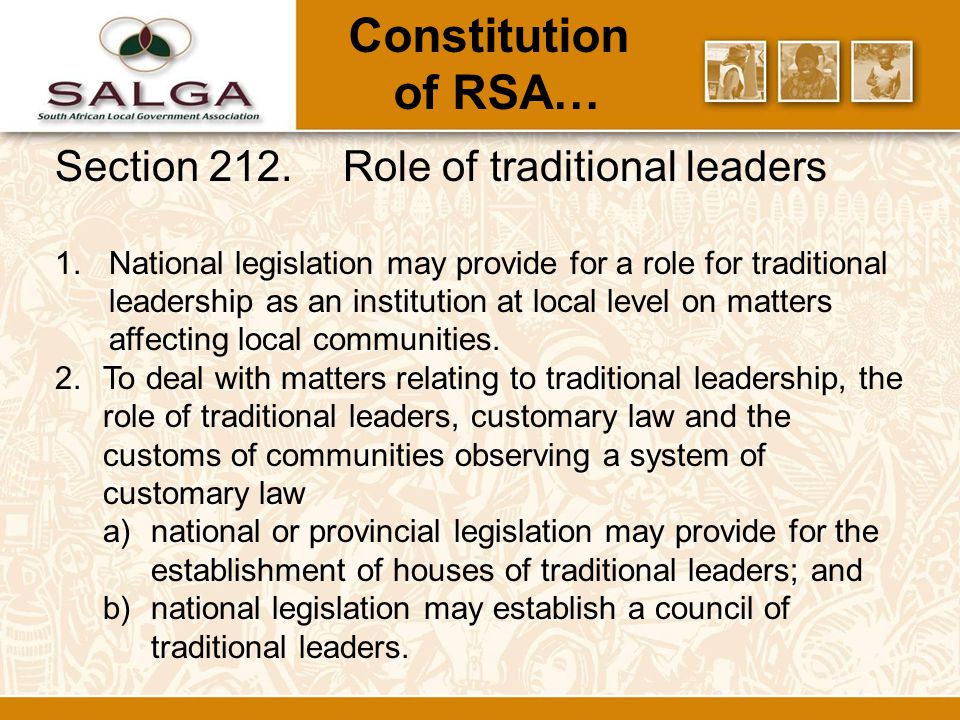 The trends at an international level indicate that traditional leaders and traditional
leadership institutions have a much bigger role to play as custodians of culture and protectors of custom. However, they also have a clear role to play in the performance of judicial functions within their communities. 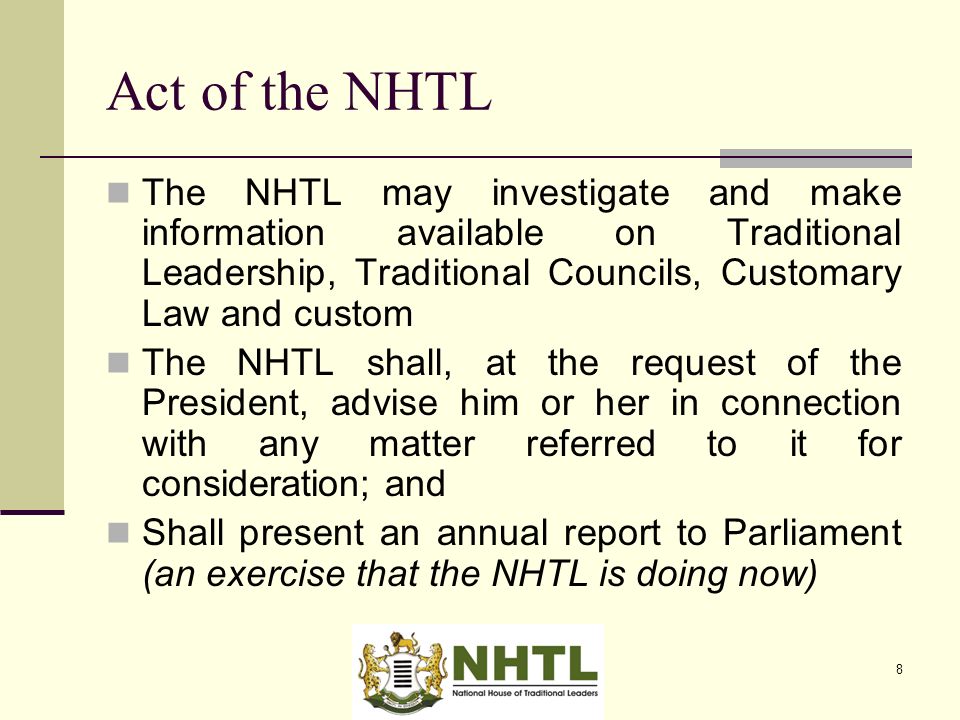 These structures were also brought under formal control, and legislation was introduced to regulate them. Customary structures of traditional leadership came to be referred to as tribal authorities. However, the constitution of these structures remained essentially the same. Each structure still consisted of the chief, headmen and some members of the community.

The regional authorities, councils of chiefs and ibandla laMakhosi were given local government functions similar, to a certain extent, to those carried out by municipalities. Most of them, however, lacked the necessary infrastructure and capacity to carry out these functions. As a result, these functions were carried out mainly by the relevant government departments, and, in some instances, these were not carried out at all.

In the light of the assignment of the governmental responsibilities by the Constitution to the three spheres of government, it is necessary that the role of traditional leadership structures be redefined so as to align them with the new constitutional arrangements. Secondly, the definition of the role and function of traditional leaders as outlined in chapter 3, also entails that such redefinition should take place.

Structures which were created by apartheid and homeland legislation, including  community authorities, regional authorities, ward authorities and ibandla la makhosi, should be disestablished. Tribal councils, as they existed before colonialism, and which were based on custom, should be established and renamed “traditional councils”. Their constitution should also be based on custom and customary law. They should be well-resourced and their staff capacitated so that they can play a meaningful role. 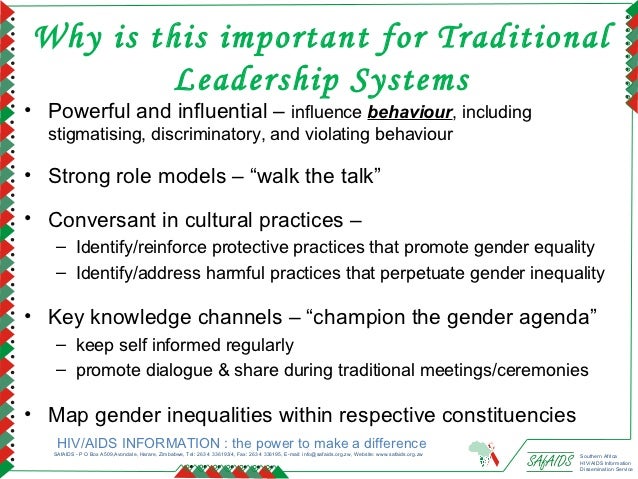 Historically, traditional leaders, at all levels, were not remunerated. However, they enjoyed certain entitlements, for example, the entitlement to the first fruits, free labour from their communities, large tracts of land, etc. Only after the promulgation of the Black Authorities Act No. 68 of 1951, did the question of remuneration by government arise.

Under the homeland system, various homelands initiated their own laws governing, among others, the remuneration of traditional leaders. Even then, the determination of the remuneration of traditional leaders was not uniform across the country. Kings, chiefs and headmen were remunerated at different levels while in some homelands headmen and certain categories of headmen were not remunerated at all. In provinces like KwaZulu-Natal, where there is a large number of headmen, they are recognised but not remunerated by government.

In some areas, however, they are remunerated by government. Their remuneration, though largely nominal, is in terms of statutory law. In certain areas communities took action which led to the abolition of the headmanship system. 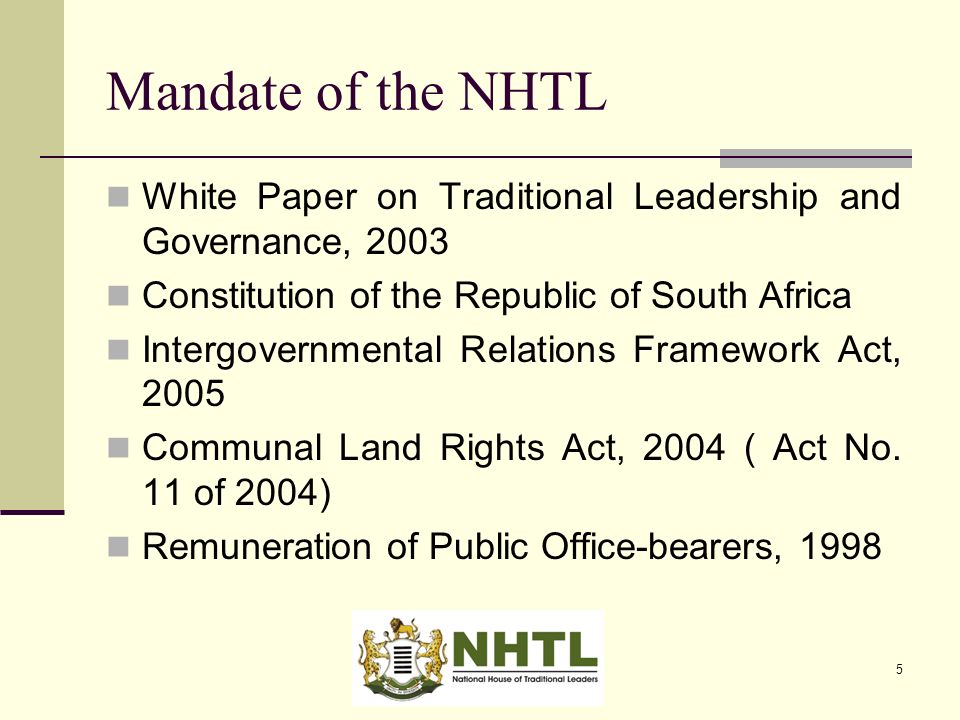 Was on its way to get full indepence (self-determination) – that means, they rule themselves and make their own laws like any other country.  At this time, the homelands enjoyed elections and elected their own leaders.

Traditional leaders should be custodians of tradition and culture. Their role in respect of governance should be advisory, supportive and promotional in nature.   In this regard, they should work with all three spheres of government. The advisory role referred to must also be enhanced by, among others, ensuring that the National and Provincial Houses play a meaningful role in legislative processes and other matters affecting tradition and culture.

The legitimacy of those occupying positions within the institution should be beyond reproach. Traditional leaders should be involved in nation-building initiatives and, at the same time, they must promote the rights of cultural, linguistic and religious communities.

The various Boer Republics were not part of the British colonial era or their systems.   The British Empire came all the way from Brittain and declare war with the Boers and other ethnic groups in southern Africa.
***

4.7.3 Membership of the National and Provincial Houses

Its members serve on a part-time basis, except the Chairperson and Deputy Chairperson, who are full-time members. The National House has indicated that it wants to become a full-time body and to play a more significant role in the formulation of policy and legislation.

The Department of Provincial and Local Government and the Northern Cape Provincial Government are presently handling issues relating to traditional leadership and governance in respect of the Khoi-San people. The matter is being dealt with within the context of the processes initiated by this White Paper.

Thus the recognition of traditional leadership will be handled by the proposed  Commission on Traditional Leadership Disputes and Claims.

Read the White Paper of parliament regarding ethnic people.

WHO ARE THE BENEFICIARIES OF SO-CALLED B-BBEE-EE?
B-BBEE legislation : so-called mandate

B-BBEE IS NO DEMOCRACY
Black empowerment, unemployment and crime is not demoracy

Most of the legislation in parliament do have a base of this prescribed B-BBEE-AA requirements to take into account.   Even the provinces and municipalities must include all requirements of National Government into their own actions on second or third level of government, that includes Tenders and Appointments.
Swart bemagtiging – Regstellende Aksie – Dokumente B-BBEE – AA – documents

MAIMANE 2016:  “I don’t care whether you are white or black, but if you are racist the DA is not your place.”
BEE is racism and discrimination

In South Africa, race legislations  are only against the white minority group of people (Affirmative Action and Black Economic Empowerment) that violated our white’s human rights – the ANC, with other political parties,  destroyed our economical, cultural and social rights since 1994.  It is all written into their so-called “rainbownation”‘s constitution with legislations.
Racism, Discrimination, Crime and Corruption – UN (prevention)

It is critical to make the fundamental foundational shift to an economy that supports the entrepreneurs who will be the businesses of tomorrow. By creating new markets, business models and employment opportunities, African business enterprises have the potential to set the economy in motion towards a brighter, more equitable future.
B-BBEE – Shanduka black umprellas

Hosken Consolidated Investments Limited (HCI) is a black empowerment investment holding company which is listed in the financial sector on the JSE Securities Exchange South Africa. HCI’s major shareholder is the South African Clothing and Textile Workers Union.    The group is involved in a diverse group of investments including hotel and leisure; interactive gaming; media and broadcasting; transport; mining and properties.
Hosken Consolidated Investments (HCI) – B-BBEE

Ramaphosa was and still is the driver of the liberal movements since 1982 (Broederbond) and also the Dakar meetings (1986).  He was appointed in the South African parliament,  as MP and financed by George Soros and other liberals.   A commission was created and he chaired that commission, to investigate and then implement B-BBEE legislations that promotes social poverty and destroys businesses, especially white Afrikaner and Boer businesses.
Racism and discrimination – B-BBEE legislation – Ramaphosa

B-BBEE – The Act provides a legislative framework for the promotion of BEE, empowering the Minister of Trade and Industry to issue Codes of Good Practice and publish Transformation Charters, and paving the way for the establishment of the B–BBEE Advisory Council.   B-BBEE legislation is only against the WHITE minority groups in South Africa.
B-BBEE legislation and rules
*

Black Economic Empowerment and Affirmative Actions are legislations, implemented only against the white minority peoples of South Africa.  Various people have no income and live in squatter camps and under the trees.    B-BBEE is not a political party’s or “policies of government” but it is actually legislations supported by various political parties in partliament.
South Africa’s Race-Based Socialism against white minority

We as the Boers and Africans are not the only people who are stateless today – there are other peoples as well.   Liberal whites supported the constitution since Kodesa and Dakar, in parliament as well, with various racist laws in place that totally violate our rights for 25 years plus.
Statelessness – Violation of Human Rights and international crimes

All B-BBEE / BEE / EE are racism and legislation that discriminate only against the White (Afrikaners en Boere) in South Africa.  It suits the government and all other political parties to have such cruel legislation in place against the whites in South Africa to cut white  wings and economy.
BLACK EMPOWERMENT SOUTH AFRICA