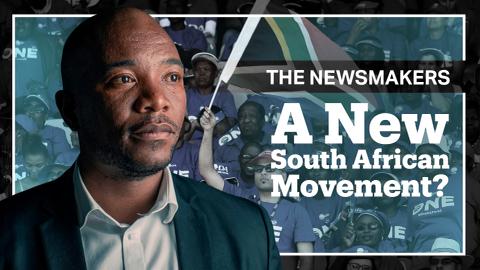 Stressing that Mosa is not a political party, Maimane said it will work closely with other political organisations.    He said the movement will use technology and innovation to galvanise political support among citizens without becoming a fully fledged political party.

“Why a movement, and not a party? We already have 48 [parties]. I’m not certain party [number] 49 is going to bring the change we need. If we look at global politics, it is not political parties that are bringing change [it is people]. What SA needs is a movement of citizens. It is a coalition of parties — an agreement between religious organisations, civil society and business.”

Maimane said that although he is not desperate to get back to the parliamentary benches, he is not ruling out the possibility of contesting elections under the Mosa banner.

The organisation will be awaiting a Constitutional Court case to determine whether independent candidates can contest provincial and national elections. Independents can already contest local government elections.

“We need electoral reform. We need to directly elect people who will serve us rather than elect a party who will give us people we don’t know,” Maimane said.

He said that if a million people can sign up on Facebook to the I’m Staying campaign — pledging that they won’t emigrate to another country and rather become active citizens back home — then South Africa needs a movement.

Maimane said the movement would be funded by individual contributions of as little as R20 a person, with some crowd-funding campaigns to raise money and awareness. He added that consultative forums will kick off in the coming weeks, with the official launch of the movement expected in April.

The former leader of the opposition resigned from the DA in October 2019. He said there was no bad blood between him and his former party and would not be drawn on questions about whether he jumped or was pushed from his position following disappointing 2019 election results.

He even thanked the party for giving him “the experience to help serve South Africans”.

Since 1994, this movement of Maimane has been a third or fourth group / political party to create a so-called rainbow nation like F W de Klerk. The well-known fact that separate areas, (apartheid) where mandela and the clerk hold hands in the air that it was broken down, is a lie. The first rainbow nation has completely failed and separate areas still exist only under other names and national legislation, even in the “socalled democratic constitution”.    The DA, of which Maimane was leader, was involved in the creation of the 25 years in parliament. The DA’s “mission” was also “ONE NATION” in South Africa. The ANC and the DA, together with the EFF, have all promised changes since 1994, they promised houses, furniture, services, schools and education, everything to their followers for free, but everything was simply stolen.

South Africa do have minority ethnic groups, and those are Black, Khoi San, Coloured, Indians and Whites (Afrikaners and Boers).  Our traditions, identity, languages, cultures are all different from each others.  Black and other peoples are different from each other, who are not under one traditional leader either.  We never was one NATION, but minority groups of peoples.    Nobody can change the colour of their skin and all of us have roots to a specific group of people.  Our history are also not the same.

After 1994, Classical liberals, liberals and communists forced all of us to be “one nation” but it will not easily happen.    Different Black ethnic groups of people, Khoi San and Coloureds still preferred their own separate areas, called traditional CPA’s /trustland/areas, previously homeland or reserves/ crownlands (1854) – Shepstone Policy.   There were separate areas already under British control.  Mfecane (after 1805) took place largely between black and black ethnic peoples who exterminated each other.  There is also White Paper on Separate Areas and Land Claims (CPAs)

Since 1994, there are 8840 traditional leaders (chiefmen, indunas and others) (Hansard 2018) only different black and Khoi San/Coloureds ).

Former Democratic Alliance leader Mmusi Maimane is officially making his way back into politics. He quit the party in October 2019. Maimane will be launching a ‘Movement’ in the next two months, which comes as no surprise as it was speculated subsequent to his resignation from the DA. Mmusi Maimane joins us in studio on this conversation.

Ramaphosa – there is no “democracy”
Communist Constitution

Mandela and De Klerk received their “peace” prize during 1993 to “dismantle the so-called apartheid” (segregation) and to do away with “homelands” etc.  BUT what are the real facts about segregation in South Africa and what price do we, as tax payers still pay for that fake “peace prize” of De Klerk and Mandela?   Question:  What are the traditional leaders doing for us , the Afrikaners and Boers people today? – while they all supported the ANC’s communist rules and black economic empowerment and still have their own “homelands” called Trustlands?  Even the Chinese people and immigrants from Africa and other continents,  have more benefits than the citizens.

It was recently declared that the South African traditional leaders cost the taxpayer over R250 million a year. but it is much more than that.     Traditionally, the zulu or xhosa leaders (queen/king) are only rulers of their own people and tribes, not the traditional leaders of the Khoisan, Indian or Afrikaner/Boer people.   Khoisan and Griqwa do have their own leaders as well lands.   There are 8840 traditional leaders at the moment – living on Trustland or CPAs (old homelands and landclaims).   Therefore, it is not the  “Government” that pay the bills, but the “taxpayers”.     But who are those 8840 black and coloured traditional leaders?   All of them, were “appointed” after 1994 in their own separate lands.

The White Paper on Traditional Leadership and Governance, July 2003, issued by the Minister for Provincial and Local Government deals with certain aspects, like the various international agreements, as well as the historical traditional leadership,  the old homelands and what happened after 1994.   Please read the documents, White Paper and information here as well.

Legislation only for black and khoisan
*

The Zulu king and traditional leader,  Goodwill Zwelithini’s annual budget is set to be R75m during the 2021/22 financial year and it will increase slightly this year to R66m from  R65.8m in 2018.   This is according to the estimates of the provincial revenue and expenditure for 2019/20 prepared by the KwaZulu-Natal provincial treasury and presented during finance MEC Belinda Scott’s budget speech in the provincial legislature in Pietermaritzburg on Thursday.   The other kings and budgets will follow soon.  There are 8840 traditional leaders.