This is only a small tip of the R7 billion theft!   When officials have enough time to steal something from their own company, it is sabotage, an act of terrorism and a crime, not only to government, but to all of us, the public.   Officials can not do their job while stealing at the same time.        Eskom is a public entity and belong to all of us.

MMC Nico De Jager talking to the media when Joburg City officials were showing the media some of the City Power stolen cables and other materials recovered.
Picture: SIMPHIWE NKWALI/ SUNDAY TIMES 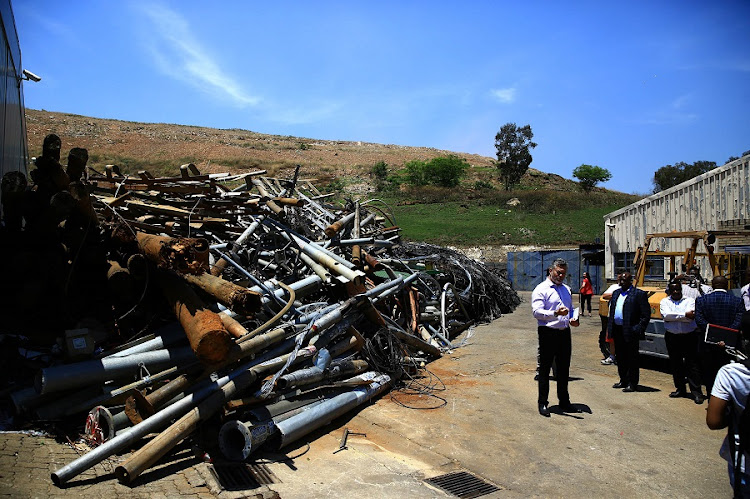 Furthermore – Who is doing the audits annually and why?

Why are there Directors and Board members – to do what – their role and functions?

Who are then responsible, who are the supervisors and managers, the fleet managers in charge of the fleet of Eskom?

Who are responsible for the replacemeng of household equipment because of damage and load sheddings?

All this stealing of equipment, the using of official vehicles, the time they “clock” and work for Eskom, while it is false, is sabotage, not only by the one official.

Supervising is important to know what your staff are doing.   If there is a lack of supervising, stealing will be ongoing as is.   It is sabotage and terrorism.

Is of the opinion that some officials are false, with their own hidden agenda to use inside information to enrich yourself and public money.

SA risks being classified as a dysfunctional, failed state by international financial and banking institutions due to Eskom’s load-shedding and rampant cable theft. It is an act of treason and sabotage to steal cables during load-shedding. These acts are propelling the country into an abyss of darkness. They constitute an assault on our democracy.

The definition of treason under our law includes the coercing of the government by violence into any action or inaction, threatening, or endangering the existence or the security of the republic.

Replacing copper cables costs cash-strapped Eskom R1.3bn a year; it costs Transnet and Telkom also large sums to replace stolen cables. The cost to the economy is about R7bn a year.

(All of the public entities – how conveniently – and who is appointed – mostly B-BBEE).

It is time to eliminate this scourge by ruthlessly implementing the law. Dithering is a luxury SA cannot afford as it totters on the brink of a total blackout.

The international ratings agencies are watching us. Should we falter, our credit ratings will be downgraded to junk status.

An investigation during March 2015 was carried out by the city of Johannesburg uncovered an electricity rigging syndicate that has cost the council around R22-million.   Businesses working together with corrupt council workers have been manipulating accounts so that they pay nothing, while the public forks out more. Is it the tip of the iceberg?
Illegal connections and syndicates – Eskom

Toevallig?
The case was heard in the High Court on March 27 and, on March 29, 2018 and the case was dismissed. Judge Dawie Fourie ruled that the application was not urgent and struck the case off the roll, with costs.  Agreements were later signed.    The 27 projects will amount to R55.92 billion ($5 billion) in new direct investment in the energy sector and create the much needed jobs for South Africans.   These projects will be located in different parts of the country mainly in rural areas.
Eskom – Radebe – 27 contracts

It was previously stated that Jeff Radebe  stressed that 27 new projects would stimulate 58 000 new jobs, mostly during construction and mostly in the rural areas of the Northern, Eastern and Western Cape provinces, as well as the North West, Free State and Mpumalanga provinces. There was potential to create a further 1 500 jobs in the manufacturing sector as a direct spin-off from the projects.  We have to see and wait what will happen in future.   B-BBEE is also supported – South Africans own 57.8%, or R11.9-billion, of the companies awarded projects during bid windows 3.5 and 4. Of that, black shareholders own 64.2%, or R7.64-billion.
Eskom – 27 IPP projects

All of them responsible for the appointment of board members, workers and “tender bribes” since 1994 must PAY BACK THE MONEY.    It is a fact:  Eskom has been failed and is still in the “capture” mode.   The “zuma capture mode – musical chairs”.   Nobody from the government or their agents today, has a desire for Eskom to work.   That means, it is a dictatorship in the making since 1980 – Communism – Bolshevism.
Eskom and B-BBEE/EE