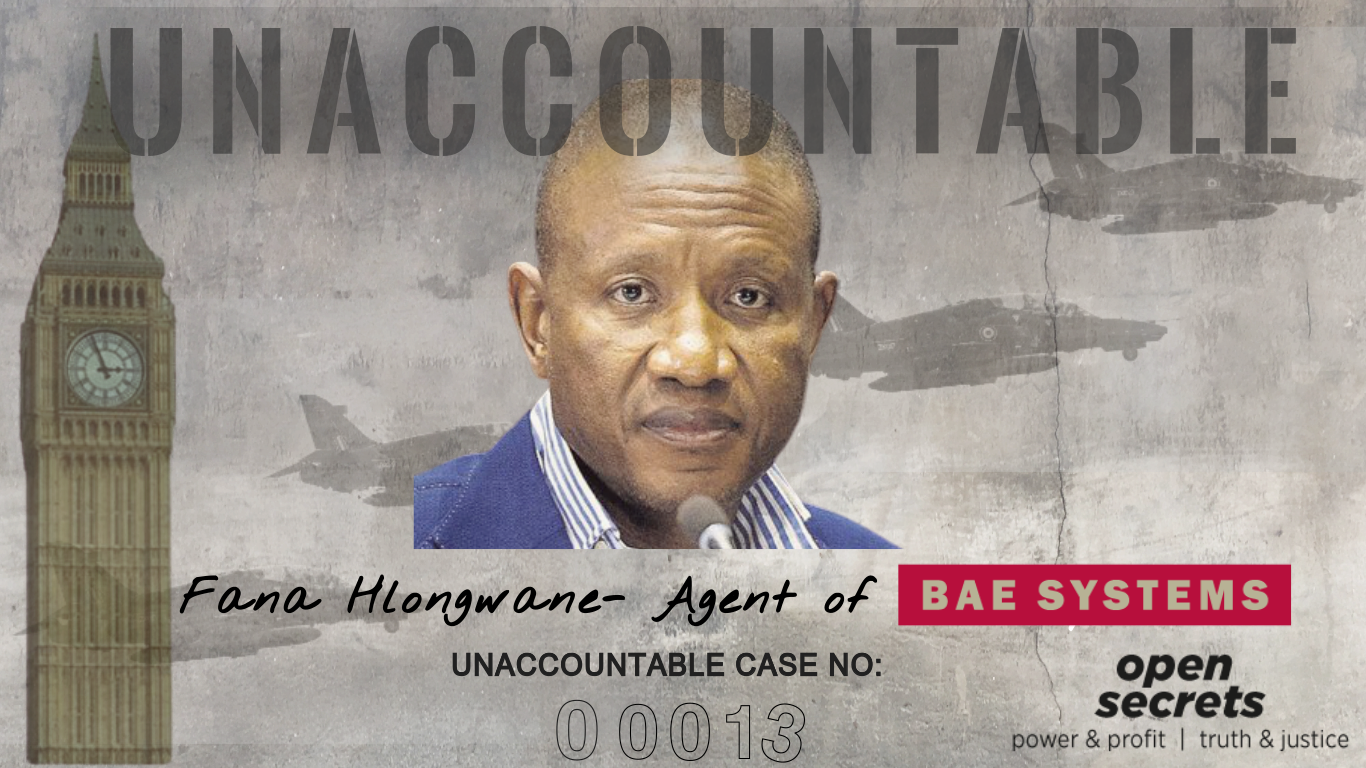 Fana Hlongwane is the chairman of consulting and manufacturing companies in the military equipment sector. A former commander of the African National Congress’s military, he was the special adviser to the Defense Minister Joe Modise from 1995 to 1998. In 1999 he acted as an alleged arms dealer between South Africa and British Aerospace (BAE).

The Seriti Commission of Inquiry during 2015, assigned by President Jacob Zuma, is expected to issue a report about Hlongwane’s alleged involvement in “fraud, corruption, impropriety or irregularity in the Strategic Defence Procurement Packages” for the 1999 multibillion-dollar arms purchase by South Africa from BAE.

Fana Hlongwane became an HSBC client in 2001 and was the beneficial owner of the client account “Leynier Finance SA” that had five bank accounts linked to it. Leynier Finance SA listed an address in the British Virgin Islands.

The list of South Africans with HSBC accounts is headed by Fana Hlongwane, the infamous playboy accused of passing bribes from defence company BAE to the now-deceased former defence minister Joe Modise as part of South Africa’s arms deal.   The HSBC client files show three accounts linked to Hlongwane – $887,905 in an account marked Leynier Finance SA, 10.3m [sic] in an account under the name of Golden Dorada Investments, and $2.28m in an account named only “32444”, and which was closed before 2007.

The list of South African clients who held bank accounts with the secretive HSBC Bank in Switzerland is headlined by CEOs of top blue-chip companies, diamond dealers, sports stars and a key figure in the arms deal.

This week, shocking evidence emerged of more than 100 000 clients of HSBC internationally, who included tax dodgers, drug dealers and government officials who used the secret Swiss accounts to launder cash and hide money.

The HSBC’s lawyers Cliffe Dekker Hofmeyr said the list of South African clients was “stolen from HSBC”. Altogether, 1737 clients linked to 585 South Africans had accounts, holding a total of $2.09-billion.

The lawyers said it would be a “breach of confidentiality” to publish the names, especially as this would lump these people together with crooks and tax dodgers. They demanded that no details should be disclosed to anyone, ever.

How HSBC attempted to gag the South African Sunday Times

The commission of inquiry into South Africa’s multibillion-rand arms procurement deal in the late 1990s famously “could not find” Hlongwane for protracted periods to serve him with a subpoena to appear before it.

Hlongwane, the special adviser to former defence minister Joe Modise, eventually did appear before commission head Judge Willie Seriti in 2014, but gave nothing away. He also made an application to the commission, which was subsequently dropped, to stop the media from taking photographs of him during his appearance because of the alleged danger it posed to himself, his family and his businesses.

Fana Hlongwane, the evasive 1999 arms deal consultant, finally took the stand at the Seriti Commission on Thursday. But not before he tried to gag the media. He applied for an interdict to bar them from publishing his pictures or airing video footage. Saying it would infringe on his safety and privacy. But Hlongwane later abandoned the application and professed his innocence.

Fana Hlongwane said at a meeting at the Gupta compound in Johannesburg,  it was to deal with rumours that he was blackmailing Mcebisi Jonas. The controversial businessman says Duduzane Zuma, son of the former president, called the meeting in October 2015.   Hlongwane told the State Capture commission that he and Jonas, then deputy Finance Minister, were friends.
https://www.youtube.com/watch?v=BsHiIFWTPlU

That was until 2011, when, in response to a prosecution brought against the government by arms deal activist Terry Crawford-Browne, the former president established a commission of inquiry led by former Judge Willie Seriti to investigate all matters related to the deal.  The commission sat from 2013 and delivered its final report in late 2015.

By the time Feinstein, Holden and Van Vuuren were due to present evidence in 2015, the three had had enough of the bureaucratic wrangling to which the commission’s evidence leaders were subjecting them and, buoyed by a call from a broad range of NGOs for the process to be disbanded, they withdrew from the process.

Ultimately, the arms deal is estimated to have cost South Africans up to R70 billion, with hundreds of millions flowing directly into the pockets of corrupt players. The Seriti commission cost the taxpayer a further R137 million and, while these amounts may pale in comparison to some of the figures emerging in the current revelations around recent state capture, Mlambo’s decision is a sign of the independence of the judiciary.

South African arms deal not over yet﻿

An article in business day of 2 November 2016, reported on the arms deals regarding the report of the previous public protector’s report regarding State of Cape Capture.   It shows how Fana Hlongwane‚ a mystery international man and alleged arms deal kingpin‚ claimed he was like an “uncle” to President Jacob Zuma’s son, Duduzane.

Advocate Thuli Madonsela’s report released the closest admitted link yet between Hlongwane and the Zuma family. Hlongwane is an enigmatic character who has avoided close scrutiny over the years, despite his name often surfacing at the centre of major controversies. Hlongwane was a key figure in SA’s arms deal, whose companies were alleged to have channelled R200m in payments from British Aerospace as alleged bribes for the ANC.   He was named in a British Broadcasting Corporation (BBC) and Guardian expose, which linked him to an international network of agents who facilitated payments‚ many thought to be bribes‚ for British company Rolls Royce.

It was stated in an article of the Times on 3 April 2016, that a number of insiders with intimate knowledge of the meeting revealed that it was Hlongwane who arranged the meeting at a Sandton hotel where Jonas was offered the finance minister post while Nhlanhla Nene was still in office.   Details of Hlongwane’s involvement come as the ANC is conducting an investigation into claims that the Guptas had offered its leaders government posts and tried to influence others to direct government business to family firms.

At the meeting, the Guptas allegedly told Jonas that they would like him to replace Nene as finance minister. He was given a list of people to get rid of at the National Treasury, including director-general Fuzile Lungisa and top officials Ismail Momoniat, Andrew Donaldson and Kenneth Brown.

The four, who have been with the Treasury for more than 22 years, are fierce critics of the nuclear procurement programme, which they believe would bankrupt South Africa.

Firing them, sources said, would have allowed the family to “capture” the Treasury, as the four vacancies would have been filled by bureaucrats approved by the Guptas.

Nene was fired by Zuma on December 9, and replaced by ANC MP David van Rooyen. The appointment lasted only four days as the decision sent markets tumbling.

The nuclear procurement programme was approved by the cabinet on December 9 – clearing the way for nuclear vendors to present proposals.

Under Nene, the Treasury had opposed the construction of a proposed six to eight nuclear power stations, saying the project was unaffordable. Experts estimate it could cost as much as R1-trillion.