It was stated in 2010 that Transylvania was not only home to the world’s most popular vampire; it was also the name of the area that today makes up Kentucky state. It existed for about a year until Congress voted against making it America’s 14th colony. 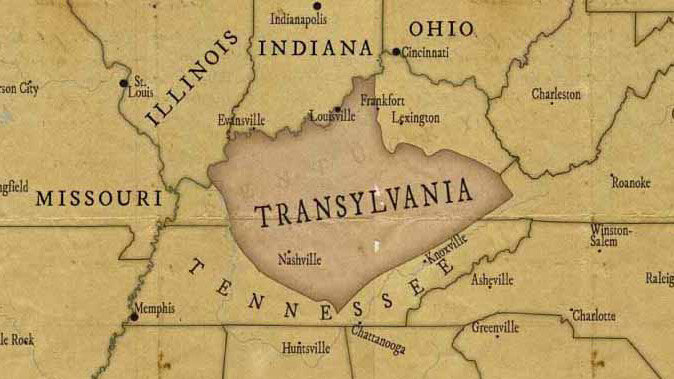 An interesting aside: One of Boone’s first acts in Transylvania (now Kentucky) was to establish special rules for breeding horses, thus launching the beginning of the region’s fame as equestrian country. Just think: If things had gone a bit differently, each spring horse aficionados might be enjoying the Transylvania Derby.

How many Dakotas are there? For the longest time, there was just one huge Dakota Territory. And today, everyone knows that the United States has two Dakotas, North and South. But for a few years in the mid-1800s, there was yet another: a tiny patch of land hundreds of miles from its bigger siblings.

Here’s the story: Back when Dakota was still a territory, everyone understood that the enormous parcel needed to be sliced up into states. First Montana was carved out, then Idaho, then Wyoming. When all the chopping was done, there remained a tiny piece left over — at the point where Montana, Idaho, and Wyoming meet. Officially, this little tidbit still belonged to the Dakota Territory, even though the nearest piece of the trimmed-down Dakota was hundreds of miles away.

In retrospect, it would have been a great place for outlaws to hide out since there were no lawmen around. But in the 1860s there probably wasn’t anyone living in Lost Dakota. It was only about one-third the size of Manhattan and was extremely remote. During that era, all U.S. territories expected to become states at some point, although no one proposed such a thing for this desolate patch of forest. Even today, the land remains inaccessible. There’s no road, not even a decent path. However, it does have its share of bears, not to mention the occasional buffalo herd. Yes, even today, buffalo roam the region, which is part of the Yellowstone ecosystem. I’ll admit, this little geographic hiccup isn’t all that significant, but the name “Lost Dakota” is rather evocative.

The anomaly lasted only a few years. In 1873, the patch was attached to Montana and became part of Gallatin County.

Transylvania is the name of a place in eastern Europe where Dracula is said to have lived. But that’s not what we’re talking about. The American Transylvania overlays Kentucky. And the name isn’t as odd as it might seem. The word sylvan means “a pleasant woodsy area.” It was a popular suffix during the colonial era; think of Pennsylvania, the pleasant woodsy region originally owned by William Penn.

Back in the early 1770s, most Americans lived east of the Appalachian range. The mountains were hard to cross, and, frankly, the western lands were kind of scary.

Thomas Jefferson had many ideas for Midwest state names that never materialized. One of those was “Sylvania,” which would comprise what today is the Upper Peninsula of Michigan and parts of Minnesota and Wisconsin. Sylvania was a popular suffix back in the day and means a “pleasant woodsy area.” William Penn wanted to use it, too, but settled on Pennsylvania in the end — a name more representative of his family legacy.

American pioneer Daniel Boone also had a thing for the “sylvania” suffix. If he’d had his way, Kentucky would have been called Transylvania and we’d be placing bets on horses at the Transylvania Derby. Boone hoped to call the colony’s capital Boonesborough, but much to the explorer’s chagrin, North Carolina and Virginia voted against Transylvania’s existence.It’s been over half a century since Hawaii joined the United States and the 50th star was added to the flag.

If these states had come to be, we could have had a state of Transylvania, Delmarva, or Nickajack!  There was a lot of debate that went on when the United States was being formed. If any of these proposed states had been approved, there may have been a few more than 50 stars sewn into the American flag. One of the proposed states that didn’t make the final 50 was the state of Westsylvania. The idea came up in 1776 during the American Revolution. The state would have been created from parts of modern-day Pennsylvania, West Virginia, and Kentucky.

The next two areas to take a shot at claiming the state of Jefferson were both in Texas. Since Texas is so big, it was given permission to split into as many as four states. Jefferson was first proposed in the southeastern part of the state but no one took the proposal seriously. Then the proposal for Jefferson was put back on the table but this time for the western part of Texas. However, not enough state sponsors approved it and the proposed state failed for the third time.

Similar to the proposed state of Jefferson, there were multiple attempts to create the state of Lincoln.

This proposed state makes a lot of sense. So much sense, in fact, that it’s still debated today. The upper peninsula of Michigan wanted to split off into its own state of Superior (after Lake Superior). The peninsula is very isolated from the rest of the state and has its own unique culture. The people who live in the area are known as Yoopers.