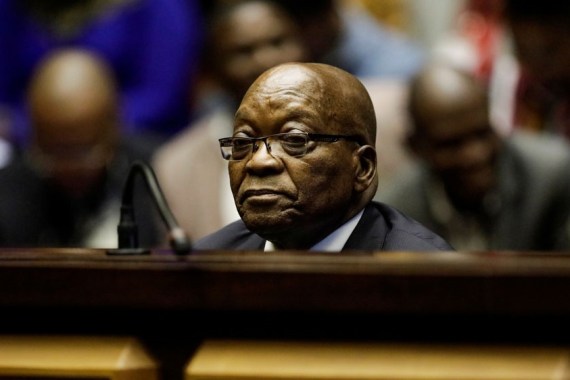 Jacob Zuma – Jacob Gedleyihlekisa Zuma, (born April 12, 1942, Nkandla, South Africa),  served as president of South Africa from 2009 until he resigned under pressure in 2018.

Business day of 21 April 2021 stated that the lawyers acting for former president Jacob Zuma in the corruption trial due to start in May filed a formal notice of withdrawal in the Pietermaritzburg High Court.      Eric Mabuza filed the notice as Zuma’s attorney of record, but did not provide reasons for the withdrawal. Mabuza did not respond to queries for comment. It is understood the withdrawal will include advocate Muzi Sikhakhane.

The latest development comes after the Supreme Court of Appeal dealt Zuma a blow last week when it ruled he was not entitled to state funds for his corruption trial legal costs, and ordered him to pay back R25m already incurred during the legal proceedings.

Zuma is accused of receiving an annual bribe of R500,000 from Thales for protection from an investigation into the controversial arms deal. The alleged bribe was facilitated by Schabir Shaik, who was Zuma’s former financial adviser.

Since 2005, Zuma has been dodging these charges which, after numerous rounds of withdrawal and reinstatement, were finally reinstated against both parties in 2018.

On 22 January 2021, the Pietermaritzburg High Court dismissed, with costs, the bid by French arms company Thales to challenge racketeering charges. Known at that time as Thomson-CSF, Thales was a supplier in South Africa’s controversial multi-billion-rand arms deal in 1999.

More information on the Arms deals

Formally known as the Strategic Defence Package, the arms deal, to use its notorious nickname, was a multi-billion-rand military acquisition project finalised in 1999 by the South African government.

The arms deal is also seen as a catalyst for the creation of divisions within the African National Congress (ANC). The first signs of dissent were shown in August 2001 by Andrew Feinstein, a senior ANC MP, who resigned from Parliament when the government moved to curtail a probe into the deal.

According to the evidence team working for the Arms Procurement Commission, which is currently investigating allegations of corruption and mismanagement in the deal, South Africa is still paying the interest on arms and military equipment purchased 14 years ago – and will continue to do so for another four years.

The arms deal: what you need to know

President Zuma appoints Judges to the Supreme Court of Appeal, Competition Appeal Court and the various divisions of the High Courts

President Jacob Zuma has appointed the following Judges, under section 174(6) of the Constitution of the Republic of South Africa, 1996 on the advice of the Judicial Service Commission:

In terms of section 36(2) read with section 39 of the Competition Act, 1998 (Act No 89 of 1998), on the advice of the Judicial Service Commission, President Zuma appointed the Honourable Madam Justice Nambitha Dambuza as a judge of the Competition Appeal Court for a period of ten years with effect from 31 October 2010.

The President wishes the Honourable Judges well in their appointments.

Chapter 4: Summary of evidence 282
[1134] Hereunder is the list of project team members of the five programmes
that formed part of the SDPP.
LIST OF PROJECT TEAM MEMBERS

Thales has also been accused of bribing former presidential spokesperson Mac Maharaj, using Shabir Shaik’s Swiss bank account as a conduit to channel money into an offshore account registered in Maharaj’s wife’s name. In 2005 Shaik was jailed for 15 years for soliciting a bribe from Thint, the local subsidiary of Thales. His appeal failed and he was incarcerated in 2007, serving just two years of the sentence.

Thales is also accused of giving a €1-million donation to the ANC in 2006.

Through its South African subsidiary Thint, the arms company won a R2.6-billion contract in 1997 to fit four new navy frigates with combat suites. The frigates would be acquired from the German Corvette Consortium consisting of Blohm + Voss, Thyssen Rheinstahl, Howaldtswerke Deutsche Werf, and Thomson CSF. The combat suite element, which made up about 40% of the cost, would be fitted in South Africa after delivery.

The arms deal – analysis and updates

Former president Jacob Zuma’s legal team says they will not be challenging the warrant of arrest issued for their client. The warrant has stayed until his next court appearance on the 6th of May. Pietermaritzburg High Court Judge Dhaya Pillay issued the order after the former President pulled a no-show due to ill health. Zuma, and his co-accused French arms manufacturer, Thales, are facing various charges, including corruption, money laundering, and racketeering. They relate to 780 questionable payments in connection with the controversial arms deal in the 1990s. We’re joined now by Advocate Makhosazana Mbonani for more.

The KwaZulu-Natal High Court in Pietermaritzburg will hand down its ruling in the application by former president Jacob Zuma and French arms company – Thales. The two applied for a permanent stay of prosecution in the corruption case.