The properties are part of the family’s sizeable holdings in South Africa which includes properties in Cape Town and Durban, and commercial buildings in Midrand.

The Gupta companies have been placed in business rescue and these properties, along with other assets, are currently being sold off to recover debts. The family’s Koornfontein coal mine was recently sold to Black Royalty Minerals.

Park Village Auctions’ Clive Lazarus previously told Business Insider that the family’s Optimum mine is set to be sold in the next two weeks.

The compound in Saxonwold is likely the last property to be sold and will likely reach around R20 million, he said.

“The property has a political stigma so it will make it interesting to sell, and it will likely be converted into offices,” Lazarus said.

IN STYLE – RAMAPHOSA IN THE GUPTA PLANE (TO JAPAN)

The Bombardier Aerospace, with registration ZS-OAK, left Waterkloof Air Force Base on Friday night under the call sign “South Africa 2”, which is reserved for the deputy president.

Ramaphosa was then photographed arriving in Tokyo in the aircraft on Saturday night.

Ramaphosa and the delegation, which included Cabinet ministers, were in the country to increase collaboration and partnerships in the fields of science and technology in order to boost economic growth and create jobs, his office said.

According to EWN, the plane is registered to Westdawn Investments, which is owned by the Gupta family. President Jacob Zuma’s son Duduzane is a director at the company. Defence department spokesperson Siphiwe Dlamini told the broadcaster such leasing was done via a central contract managed by government through the National Treasury. 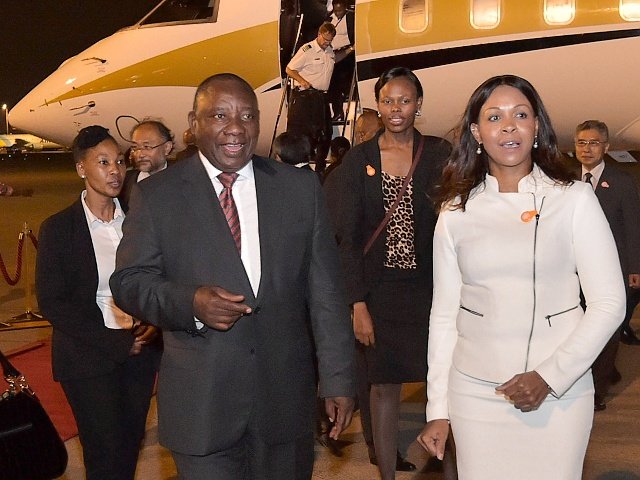 In May 2017, leaked emails purported to reveal detailed allegations about the ties between the Guptas and the government.      Later, a preservation order obtained by the high court showed millions of dollars worth of public money which was intended to support poor farmers was directly deposited into Atul Gupta’s personal account. He is yet to comment on the this.

The order revealed there was no justification for any payment, as Atul had no interest in farming nor did he provide any farming services to the project.  Involvement from high level politicians, likeANC Secretary-General Ace Magashule who co-signed the project, was also noted in the report.
Magashule – faksies

One of Britain’s leading PR firms found itself at the heart of the scandals surrounding the family after it was accused of pushing the idea of “white monopoly capital”.

Bell Pottinger, which was founded by Margaret Thatcher’s advisor Lord Bell, also created fake Twitter pages which emphasised the power of white businesses, and used the hashtag #whitemonopolycapital to – as the opposition Democratic Alliance party pointed out – inflame racial tensions in a country where the white minority still wields considerable economic power.

But why did they do it? Allegedly, to divert attention away from corruption claims being made against the Gupta family and their close relationship with President Zuma.

The PR firm was reportedly paid £100,000 a month by Oakbay Investment – a company owned by the Guptas.

Following an uproar over the campaign, the Bell Pottinger was expelled from the PR trade body and went into administration.

The Guptas courted his predecessor’s administration as well but ex-President Thabo Mbeki played a guarded game with the Guptas and the relationship did not go far.

And former DA leader Helen Zille has also enjoyed a “delicious” meal at the Guptas’ compound and received a donation for the party.

The Economic Freedom Fighters (EFF) party has called on the family to leave South Africa, saying the country could not be held to ransom by a “corrupt cartel” with “mafia” tendencies.

However, the family has been strongly defended by some of Mr Zuma’s close allies.

Feedback from the Gupta family

The Gupta family rarely speak in public. However, in an interview with his lawyer last year, Ajay Gupta said he was not a shareholder of any company or any assets

“I don’t have any share, any board [position], any property, any fixed property, whatever you call that,” he said. “Maybe one car or something, I only have that one room my father used to sleep.”

Deputy Defence and Military Veterans Minister Kebby Maphatsoe was quoted by South Africa’s City Press newspaper as saying that the Guptas owned less than 1% of the Johannesburg Stock Exchange, and should be left alone.

“We met them and asked serious questions [of them], and they responded. These are South Africans, they are not whites. They do not take profits out of the country; they invest,” Mr Maphatsoe said.

In August 2016, the family said it would sell all its shareholdings in South Africa because this would be in the “best interests of our business, the country and our colleagues”.

If they family thought this would remove them from the limelight, they were wrong.