Eskom has suspended its general manager, Velaphi Ntuli at the Koeberg Power station, while investigations are being conducted into his performance at the nuclear power station.  Unit 1 is not working since January 2021.

Mantshantsha also said Chief Nuclear Officer, Riedewaan Bakardien will oversee all the operations of the power station in the interim.

Refer to the other old documents of 2016 (in the article) about Koeberg and tenders.

It was stated in the media that Eskom is currently experiencing load shedding that is affecting the entire country and its economy.   One of Eskom’s biggest generation units, with a capacity of 900 megawatts, Koeberg unit one has been on an outage since January 2021 and could have assisted in the reduction of the depth of the load shedding – had the unit been brought back on time, as originally planned.

The project, which was sanctioned by the Eskom board in 2010 and approved by the National Nuclear Regulator, involves the replacement of all six steam generators at Koeberg’s two units.

Eskom says that, once removed, the current steam generators will be stored on the Koeberg site, where they will be packaged and dismantled for final disposal at a national nuclear waste repository.

Steam generators for Koeberg: the most expensive transport of scrap metal in the history of humankind – Chris Yelland

A former senior nuclear executive at Eskom commented to this writer at the time that: “This was the most expensive transport of scrap metal in the history of humankind”.

This was cited by Eskom as the reason for awarding the contract to Areva, where an allegedly contrived three-month “float” in Areva’s project plan was indicated as the deciding factor. This despite Westinghouse having met all the technical and commercial requirements, with a lower contract price, and a guarantee to meet the 2018 completion date on pain of substantial penalties.

Apparently, each of the six steam generator forgings required the hiring of a Russian Antonov freighter aircraft (six flights in total) to fly the forgings from France to China. However, according to an impeccable source, after taking a closer look at the forgings, Areva’s Chinese partner decided to scrap them and start again from scratch.

Regarding the actual replacement of the steam generators, Eskom now says that: “Installation is aligned with the outages scheduled for 2021 and 2022 respectively for the two Koeberg reactor units (Unit 1 and Unit 2)”. No mention is now made by Eskom of the criticality for completion in 2018 cited by Eskom at the time as the reason for placing a more expensive contract with Areva.

The factory where Koeberg’s steam generators are being built

Eskom awarded the R4.3-billion Koeberg contract to Areva in September 2014, but Westinghouse Electric Company, which also bid for the contract, immediately cried foul and launched an expedited review application in the South Gauteng High Court.

Eskom CEO Brian Molefe has stressed previously that it is proceeding with the steam-generator replacement “not because there is going to be an outage, but because it’s the correct thing to do”. He notes that most other nuclear plants that operate 900 MW-series reactors, such as those deployed at Koeberg, have already replaced their steam generators. 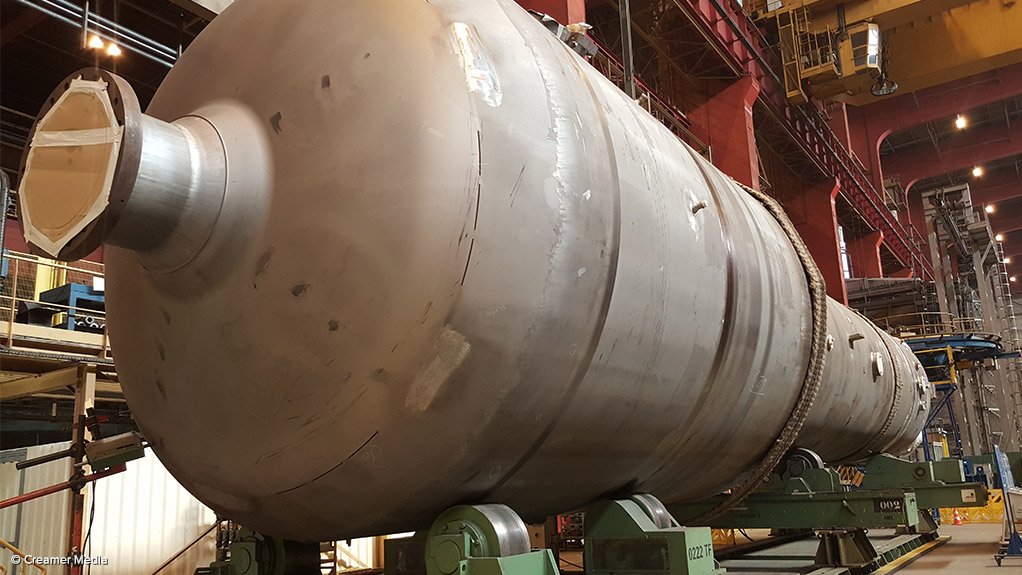 Speaking during a recent media visit to Areva’s Chalon/Saint-Marcel plant, heavy equipment manufacturing line director Patrick Poret said that the contract was at an advanced stage.

He said the group was working in close association with Senpec, of Shanghai, China, where the Koeberg stream generators would be finally assembled ahead of delivery to South Africa.

2018 – Koeberg Unit 2 is currently operating optimally and is contributing 930 MW to the national grid. Every 15 to 18 months a unit is shut down for refuelling, maintenance and statutory inspections. Outages are scheduled to avoid having both units out of service at the same time. This routine maintenance is part of Eskom’s overall maintenance programme for its generation units,” says Velaphi Ntuli, Koeberg Power Station Manager.

“During these routine outages, one third of the used nuclear fuel is replaced with new fuel. Maintenance, plant modifications, inspections and statutory work is done to ensure that international safety standards continue to be met and that reliable plant performance continues,” continues Ntuli.

Unit 1 currently holds a record of running for 400 days without being interrupted, a milestone that was achieved in December 2017. 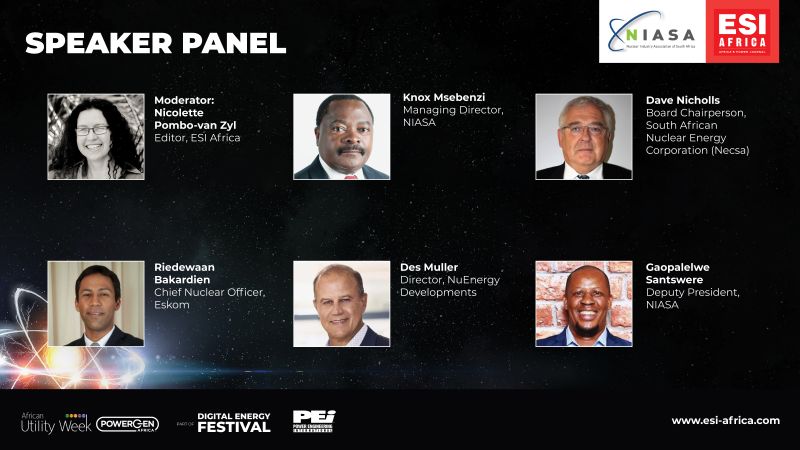 Areva won the contract despite a competing bid from Westinghouse, which was R140 million cheaper. Eskom argued it had awarded Areva the tender based on “strategic considerations”. But those considerations were not included in the original tender, which the Supreme Court took issue with. Both Eskom and Areva appealed the SCA judgment to the Constitutional Court, and Westinghouse also cross-appealed the judgment to be substituted as the successful bidder without the tender being reissued.

During March, DA energy spokesman Gordon Mackay, accused Eskom of misleading the public over the Areva tender. “Phasiwe stated in January 2016 that the work on the generators is 50% complete and that it would not make sense to reissue the tender. Industry experts, however, have noted that this is highly unlikely given that construction only commenced about September last year.

“The alleged progress made in the past six months is further at odds with Areva’s previous statements that they would not meet the 2018 deadline for completion if the contract award is delayed. One can only deduce that Eskom is doing everything possible to avoid having to reopen tender process that landed Areva with the contract over the preferred bidder, Westinghouse,” Mr Mackay said at the time.

* Meanwhile, the Hawks are investigating how a drone managed to breach Koeberg’s safety cordon violating the National Key Points Act and Civil Aviation Act. Eskom released a statement on Wednesday August 10 saying that the drone, which crashed on the Koeberg site was in violation of the nuclear safety regulations and was returned to its owner without the investigation having been completed. The Koeberg safety officer was subsequently suspended as a precautionary measure while the matter was being investigated by the Hawks and the South African Civil Aviation Authority (SACAA). Hawks spokesman, Captain Lloyd Ramovha, said the unit was investigating the incident. No arrests had been made. The SACAA said drone pilots had to comply with civil aviation regulations, which prohibit flying aircraft near a nuclear power plant, prison, police station, crime scene, court of law, national key point or strategic installation. Those who flouted civil aviation regulations could land themselves a 10-year prison sentence, a R50 000 fine or both, he said.

2018 – Westinghouse is contesting a R5 billion contract to replace Koeberg’s steam generators. Eskom awarded the contract to French energy group Areva, but Westinghouse argued that the whole tender process was unlawful because of alleged lack of proper compliance with the tender requirements.

Reforging its core business to return to competitiveness after record losses of €4.83 billion in 2014, French nuclear firm AREVA has split its five operational business units and rebranded them.

The creation of the AREVA group itself was an overhaul effort. The company was formed in 2001 with the merger of Framatome, Cogema, a nuclear business of German giant Siemens, and French propulsion and research reactor arm Technicatome. Framatome—short for Franco-Américaine de Constructions Atomiques—was created in 1958 by Schneider, Merlin Gerin, and Westinghouse Electric to exploit the emerging pressurized water reactor (PWR) market.

By 1975, the company had become the sole manufacturer of nuclear power plants in France, equipping French state-owned utility EDF with 58 PWRs, and gradually taking on more projects overseas, building reactors like South Africa’s Koeberg, South Korea’s Ulchin, and China’s Daya Bay and Ling-Ao. In 1989, Framatome and Siemens created a joint company called Nuclear Power International to develop the EPR, a third-generation reactor that complied with both French and German nuclear regulations. The companies eventually merged in 2001, retiring the Framatome name and giving birth to AREVA.

One of the company’s most prominent contract wins came in 2003 from Finnish utility Teollisuuden Voima Oy (TVO) for construction of the world’s first EPR, Olkiluoto 3, in southern Finland. In 2007, AREVA also signed a contract with EDF for an EPR in Flamanville, France, and separately with Taishan Nuclear Power Co., a joint venture 70% held by China Guangdong Nuclear Power Holding Corp. and 30% by EDF. Two years later, Siemens withdrew its capital in Areva NP—AREVA’s specialized nuclear steam supply system arm—citing a “lack of exercising entrepreneurial influence within the joint venture” as the reason behind the move, and transferred its 34% stake to the AREVA group.


It’s actually Areva, a $9 billion company, with U.S. headquarters in Charlotte, North Carolina, which provides end-to-end materials, equipment, and services to nuclear power plants all over the world. And for the past 10 years, a piece of it has taken up residence in Cranberry Business Park, where it reaches out to serve a cluster of nuclear plants in the U.S. and Canada with electrical equipment and related services.

The Fench state-owned utility EDF has completed the acquisition of a 75.5 percent stake in Areva NP, the nuclear reactor construction unit of fellow state-owned nuclear group Areva. These agreements foresee the acquisition by EDF of 75.5 percent of New NP’s capital on the basis of an adjusted valuation of 2.47 billion euros,” EDF said in a statement.Under a November, 2016 agreement, EDF agreed to buy between 51 and 75 percent of Areva NP based on a value of 2.5 billion euros for 100 percent of its capital.