Mandela was until his death a communist leader in South Africa.   Read also the manifesto of the ANC of 1955 – based on communism and bolshevism.   refer to: ANC FREEDOM CHARTER.

Ahead of an address at European Parliament, the president was forced to defend his policy on land.

President Cyril Ramaphosa gave a quick interview with members of the European press ahead of his addressing European Parliament in Strasbourg, France on Wednesday.  The president appeared alongside European Parliament president Antonio Tajani and used the opportunity to promote trade between Europe and South Africa as well as to talk about the centenary of Nelson Mandela.  Ramaphosa also had to field an uncomfortable question about land, after a journalist asked him if his rhetoric about the legacy of Mandela was contradicted by his presidency’s adoption of what was termed the “Marxist route” of land expropriation without compensation.

In response, Ramaphosa said the issue of land in South Africa, which may seem intractable, would be resolved just as apartheid had before it.  Economists and analysts have questioned whether the adoption of expropriation, which Ramaphosa has said several times is needed to address the “original sin of land dispossession”, conflicts with his desire to encourage investment in South Africa.

In July, Business Unity of South Africa (BUSA) said the issue of land expropriation and the debate over whether section 25 of the constitution should be changed had put the brakes on long-term investment commitments by foreign investors.    Ramaphosa, meanwhile, has taken pains several times to try and calm both South Africans and potential overseas investors.   Speaking to the House of Traditional Leaders in March, he said that people should not panic about expropriation, adding that it would not be a “smash and grab”.   In August, he told a room full of investors that “anarchy” would not be tolerated and that expropriation would be carried out in an orderly way.

He echoed these sentiments at the beginning of November at the Discovery Summit 2018 in Sandton attended by, among others, former US secretary of state Hilary Clinton and former UK prime minister David Cameron.    “We will not allow this to lead to degradation of economy. We won’t allow land grabs. As we heal this wound, we will do it how Mandela taught us. We must have discussions, and reach agreements that contribute to social cohesion and nation building,” he said.

>>
Tajani: “We need to look at Africa not with European glasss. Relationship with Africa is key point. Work on industrialization, research, policy.” 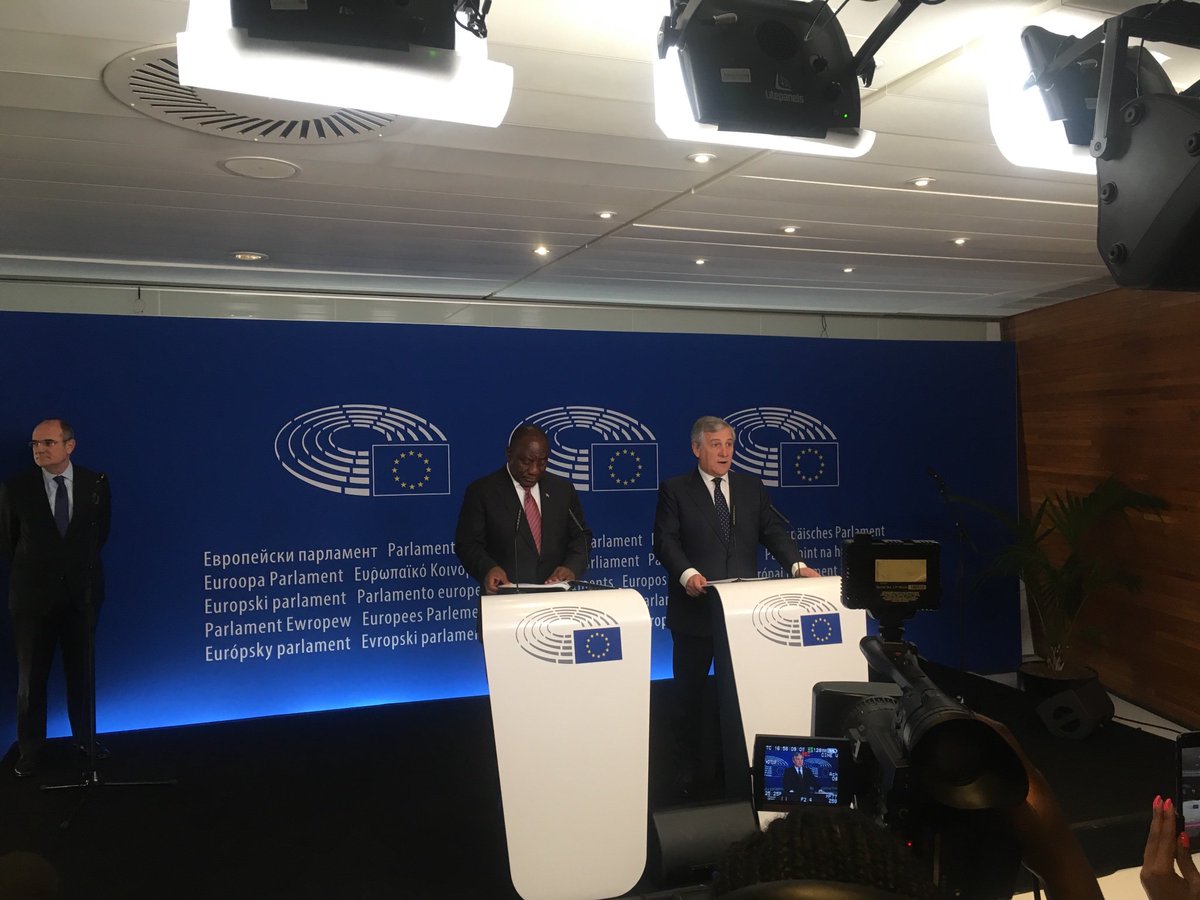 President Ramaphosa: “Just four months after his release from prison, Nelson Mandela was in #EuropeanParliament to receive the Sakharov prize. We thank Europe for the help they gave in fighting apartheid. (Applause). Please continue to support us in rebuilding the country”

President Ramaphosa launches into a patient explanation of land, saying it will be resolved just as the apparent intractable problem of apartheid was solved. European parly President Tajani looks like he’s worried they will end up being late for the sitting

Question from a European journalist who says it’s an apparent contradiction that President Ramaphosa wants to uphold Mandela’s legacy and follow “the Marxist route” of expropriating land. Listen here on the radio about the “original sin” …

President Ramaphosa: “Just four months after his release from prison, Nelson Mandela was in #EuropeanParliament to receive the Sakharov prize. We thank Europe for the help they gave in fighting apartheid. (Applause). Please continue to support us in rebuilding the country” 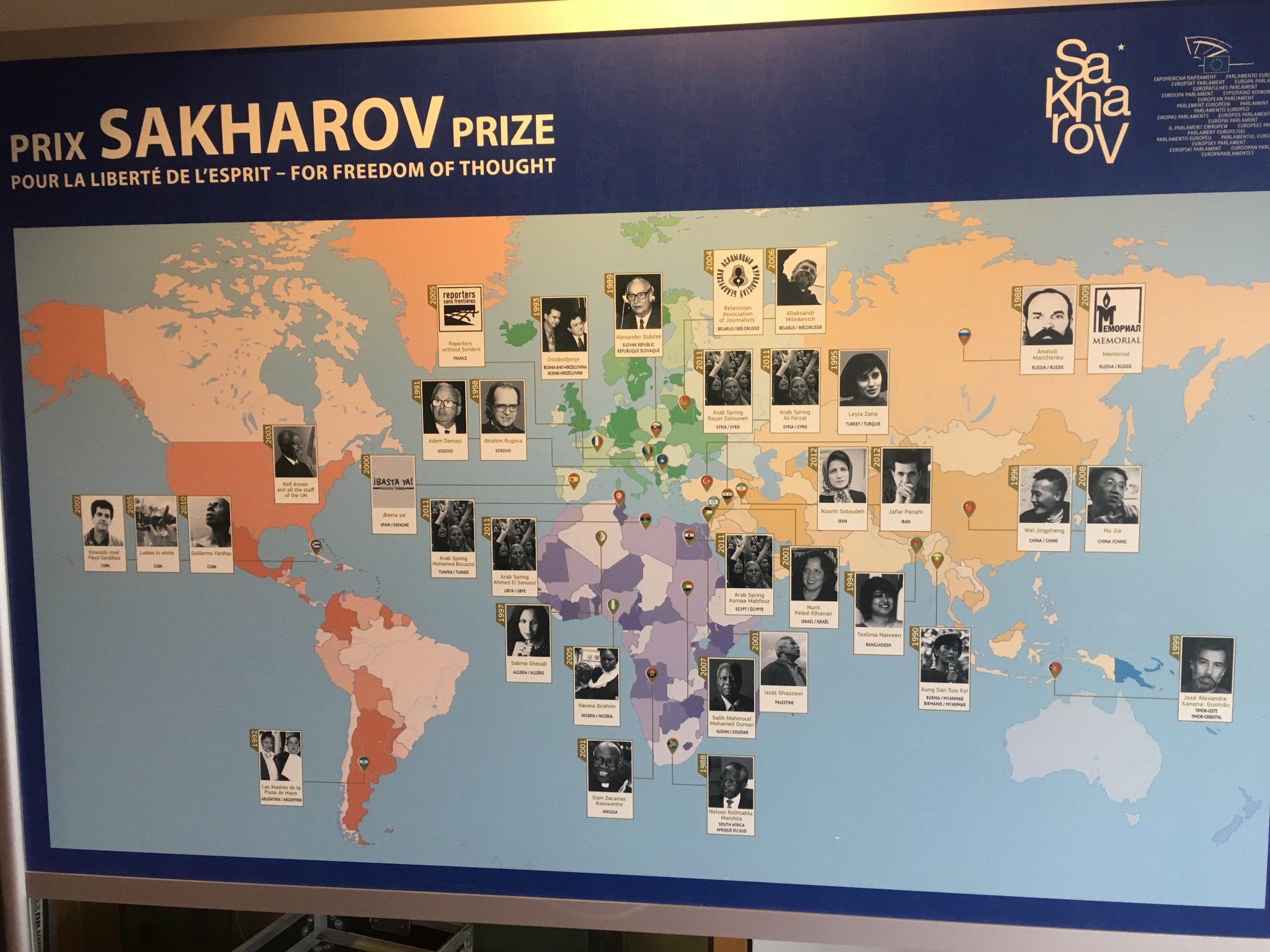 President Ramaphosa: “Nelson Mandela was an ardent advocate of pan-Africanism, and we can draw lessons from Europe on integration and unity.” #EuropeanParliament

President Ramaphosa talks about the benefits of the African Continental Free Trade Area, but also mentions migration. “We need to work together to address the root causes of irregular migration with solidarity and humanity, and respect for human rights.” #EuropeanParliament

ANC and Communism in South Africa