Who was the Black Pimpernel? 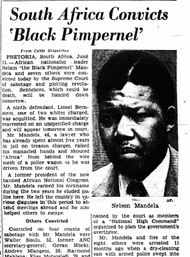 Go back into all our history pages 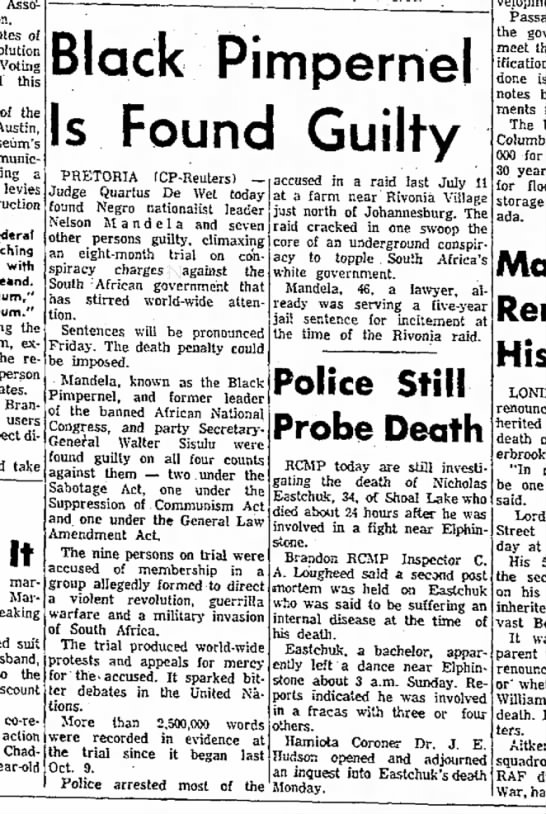 Fifty-one years after he conducted the last print interview with Nelson Mandela before his arrest, South African journalist Peter Hazelhurst has received the missing article.

On 14 May 1961 the Sunday Express journalist published an interview with South Africa’s most wanted man – Nelson Mandela who had been underground since early April 1961.

The article went missing during the journalist’s travels years later and with the assistance of the South African National Library the Nelson Mandela Centre of Memory has found the article and gave it to Mr Hazelhurst.

One day in May 1961 activist Ahmed Kathrada visited Mr Hazelhurst in the Johannesburg newsroom and asked whether he would like an appointment with the fugitive dubbed the Black Pimpernel. On the arranged day and time Mr Kathrada took him to a shop in central Johannesburg and he interviewed Mr Mandela in a back room for 70 minutes.

“Ruth [First] must have asked me to see you … because she was in touch with the media,” Mr Kathrada told Mr Hazelhurst when they met again in June 2012.

In May 1961 Mr Mandela, then aged 42, was the leader of the planned three-day strike against South Africa becoming a republic. He said in the interview that the strikes were not aimed at whites but directly at the National Party regime. He also spoke about his vision of “a national convention of all groups of the country which would form a new non-racial constitution to bring about a new non-racial and democratic South African society.”

Speaking this week Mr Hazelhurst said, “What I found amazing is that’s exactly what he said when he came out of prison.”
He went on to become a correspondent for the London Times covering the whole of Asia except Laos and North Korea. The day after the article appeared in the newspaper Mr Hazelhurst was questioned by the notorious Colonel At Spengler of the police’s Special Branch about the whereabouts of Mr Mandela but he had prepared for that. He had written in his story that he had been blind-folded in order to protect Mr Mandela and his comrades.

“They said, ‘who led you there?’” he recalled. “I said I was picked up on the street and I was blindfolded because I didn’t want to compromise that very brave lady in the shop … That’s why I went through that facade of using that in the lead,” Mr Hazelhurst said.

In fact for more than half a century he remembered the first paragraph of the article: “They took the blind-fold off. Sitting in front of me was Nelson Mandela, the most wanted man in South Africa.” The article ends with “I was blind-folded again and led out to the car. Again the circling and zig-zagging, until I was dropped in the centre of Johannesburg at the same street corner.”

Mr Mandela was arrested on 5 August 1962 soon after his return from a seven-month clandestine tour of Africa and London. He was charged with leaving the country illegally and inciting workers to strike. Mr Hazelhurst was subpoenaed as a witness against him because of the interview. In his cross-examination of the journalist Mr Mandela, an attorney managed to turn him into a witness for the defence. One of the questions he asked Mr Hazelhurst was whether he supported “one man one vote” to which he replied in the affirmative.

In the recess Mr Hazelhurst was recording women, including Winnie Mandela, singing outside the court. While the tape was running a Security Branch policemen and the assistant prosecutor threatened him to make him change his evidence. He refused and showed them the tape recorder and told them, “If you do anything I’ll play this to the judge.” They backed off.

Mr Mandela was sentenced to five years in prison. While he was serving his sentence, the raid on Liliesleaf Farm took place and he later joined his comrades on trial for sabotage. On 12 June 1964 at the end of what became known as the Rivonia Trial Mr Mandela and seven of his comrades were sentenced to life imprisonment.
..

LILLE — Two women and a man who occupied a chateau at Mont du Peruwelz, from which they could reach a house in Belgium just across the border by means of an underground tunnel and railway, were arrested by French officers this morning [June 11] as smugglers into France of millions of francs worth of tobacco, chocolate and other goods. The alleged leader of the accused smuggling ring was Raymond Monteyne, a Frenchman, but the two women gave their names as Carmen Olivares, Spanish singer, and Violette Piesproeck, Italian painter. To add insult to injury as far as customs officers were concerned the tunnel and railway track passed directly beneath a border customs house.

While in PRETORIA, South Africa — African nationalist leader Nelson ‘‘the Black Pimpernel’’ Mandela and seven others were convicted today [June 11] by the Supreme Court of sabotage and plotting revolution. Sentences, which could be death, will be handed down tomorrow. A ninth defendant, Lionel Bernstein, one of two whites charged, was acquitted.