R218 billion for powerships in South African harbours – Karpowership SA (KPSA), is a South African company that is 49% Black owned.   Karpowership is a member of Karadeniz Energy Group, Istanbul, Turkey. The group is a pioneer in innovative energy projects for the last 20 years, with investments in domestic and international markets. The group started its energy investments in 1996, and is the first private electricity exporter in Turkey. Today, the group owns and operates more than 4,350 MW installed capacity globally.

*
MORE EXPENSIVE OR NOT?

In Sudan, they put in place one of these Karpowerships, but the electricity was so expensive… We can produce homegrown renewable energy much quicker, much cheaper and much more reliably.

The final cost for the electricity could change due to the make-up of the tariff. “Karpowership South Africa charges a single price covering the fixed costs for the Powerships and variable charges for fuel and operations,” the company said.
https://techcentral.co.za/south-africa-could-pay-up-to-r218-billion-for-power-ships/106070/

Karpowership is the only owner, operator and builder of the first Powership (floating power plant) fleet in the world. Since 2010, 25 Powerships have been completed with total installed capacity exceeding 4,100 MW. Additional 4,400 MW of Powerships are either under construction or in the pipeline.

Karpowership SA (KPSA), a South African company that is 49% Black owned, welcomes the  announcement made by the Department of Mineral Resources and Energy (DMRE) appointing KPSA  as a Preferred Bidder for projects in the Ports of Coega, Saldanha and Richards Bay, to provide power  to South Africa’s national electricity grid under the Risk Mitigation Independent Power Producers  Procurement Programme (RMIPPPP).

According to the announcement, the lowest bidder for low-cost electricity generation powered by a thermal energy solution using LNG, KPSA will provide electricity to South Africa’s national power grid under the Risk Reduction Independent Power Producers Procurement Program (RMIPPPP). KPSA will employ at least 65% of the workforce required for the study from local communities. Thus, the company will support the employment of the country after the pandemic, prevent frequent power outages in the country and offer a cleaner alternative with LNG in the energy transition process.

Mineral Resources and Energy minister Gwede Mantashe said in a statement on Thursday (18 March), that the ships have been approved in three ports, Coega, in the Eastern Cape, Richards Bay in KwaZulu-Natal and Saldanha in the Western Cape.

The RMIPPPP was released to the market in August 2020 with aim of alleviating the country’s electricity supply constraints and to reduce the extensive utilisation of diesel-based peaking electrical generators in the medium-to-long-term.

Powers hips are cost-effective, privately owned and operated floating power stations which can be moored at South African harbours.    Each power ship contains its own generation, electrical control, and substation components. The ship also includes its own maintenance workshop and engineering capabilities.   The onboard substation can be connected to the national grid without lengthy delays or complicated engineering.

The ships can operate both on liquid fuels (HFO/RFO) and natural gas. With high efficiency and availability, power ships can provide uninterrupted electricity at various high voltage levels.  Operation and maintenance of the power ships are also provided for by the Karadeniz Energy Group, the holding company of Karpowership South Africa.

The Integrated Resource Plan (IRP) 2019 identifies the necessary generation mix of technologies to respond to the demand for electricity. Inherent in the planning process is the commitment to energy security, cost efficiency and effectiveness, and environmental sustainability. The rollout of electricity infrastructure envisaged in the IRP is carried out in line with the Ministerial Determinations that are issued under Section 34 of the Electricity Regulations. These determinations facilitate the process of procuring the required electricity capacity.

In his State of the Nation Address 2020, the President announced various measures that the Department of Mineral Resources and Energy (DMRE) would need to implement, to confront the energy shortages. Among these measures were the urgent need to:

Sooner than anyone of us had anticipated, our country and the world went into lockdown to stave off the devastation wreaked by Covid-19. The pandemic negatively affected lives and livelihoods. At this point, our economy was further driven deep into the mire by rating agencies.

In the light of the Covid-19 devastation and the challenges to our economy, the President announced the Economic Reconstruction and Recovery Plan. The Plan, which is a social compact between government, business and labour, is intended to fast-track reforms and reduce the cost of doing business in the country. It aims to ensure investment, achieve economic growth and transformation. Once more, energy security of supply was recognised as critical to achieving the objective of economic recovery.

Against this backdrop, the Department embarked on the process of meeting the energy needs as required. In October 2020, in response to the President’s directives on the Recovery Plan, we set ourselves a target of Thirteen Thousand Eight Hundred and Thirteen megawatts (13 813 MW), to be delivered from a mix of energy sources. This included, among others,

We are here today to announce the preferred bidders for the Risk Mitigation Independent Power Producer Procurement Programme and to provide an update on the procurement of additional power in line with IRP 2019.

The Risk Mitigation IPP Procurement Programme (RMIPPPP) was released to the market in August 2020. The aim was to alleviate the electricity supply constraints and to reduce the extensive utilisation of diesel-based peaking electrical generators in the medium-to-long-term.

The Bid Submission closed on 22 December 2020 and attracted a total of 28 bid responses with a potential contracted capacity of approximately Five Thousand One Hundred and Seventeen megawatts (5 117MW). This clearly demonstrates a sustained private sector interest in participating in the South African energy landscape.

The quantity and quality of the bid responses and potential megawatt of contracted capacity allowed for a competitive price evaluation.  All compliant bids were subjected to local and international benchmarking which is necessary to ensure that we receive Value for Money as required by the legislation.

The evaluation process has resulted in the selection of 8 (eight) Preferred Bids totalling One Thousand Eight Hundred and Forty-Five megawatts (1 845) and a further 3 (three) Eligible Bids totalling One Hundred and Fifty megawatts (150MW). The three Eligible Bids are subject to value for money proposition in line with the provisions in the Request for Proposal. It is important to note that these Three bidders are within the Two Thousand megawatts (2 000MW) capacity threshold in terms of the evaluation rankings, but their announcement can only be made following satisfactory value for money propositions.

It gives me great pleasure to announce the following eight Preferred Bidders in alphabetical order:

These 8 projects will inject a total private sector investment amount of R45 billion to the South African economy, with an average local content of 50% during the construction period. South African entity participation from these projects is 51% with black ownership at 41%.

About Three Thousand Eight Hundred (3 800) job opportunities will be created during the 18 months construction period and a further 13 500 during the 20-year Power Purchase Agreement (PPA) term.

It is envisaged that, first power from these projects will be connected to the grid from August 2022.

I am pleased to announce the first bidding round in response to the Section 34 Determination. The Request for Proposal (RFP) for the procurement of 2 600 megawatts under the Renewable Energy IPP Procurement Programme Bid Window 5 will be released to the market at Midnight today.

Given the energy challenges that we are facing the objective is to get these projects connected to the grid as soon as possible.

The closing date for the Bid Submission is August 4th, 2021.

Roll out of the rest of the second Determination

We intend to release four more Requests for Proposals within the next 12 months. These will include:

In line with the IRP and the provisions in the Electricity Regulations of New Generation Capacity, additional Determinations will be issued to Eskom and Municipalities as and when requests are received.

The Department is working with the necessary speed to review the licensing threshold for increased embedded generation.

The energy generation landscape of our country is evolving. Concerted effort to ensure that the IPP Procurement Programmes steam ahead to deliver secure energy supply from a diverse range of energy sources, in line with the Integrated Resource Plan (IRP) 2019, is at the core of our work.

Collectively, our interventions give effect to the fourth priority intervention of the Economic Reconstruction and Recovery Plan, that is, to rapidly expand our country’s energy generation capacity.
https://www.dmr.gov.za/news-room/post/1894/media-statement-to-announce-preferred-bidders-for-the-risk-mitigation-ipp-procurement-programme-rmipppp

Karpowership, a unit of the Turkish Karadeniz Energy Group, is on track for its longest contract to date to supply power from vessels to South Africa in a deal worth as much as R218 billion ($15 billion).   The company that advertises a “fast, flexible, reliable” solution of floating electricity generation was named last week as a preferred bidder for three projects fueled by liquefied natural gas to provide 1 220 megawatts of electricity. The program is aimed at closing a supply gap in South Africa that’s resulting in periodic blackouts. 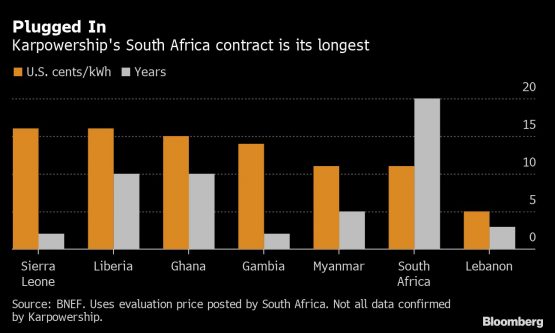 The 20-year deal will cost as much as R10.9 billion annually, according to a presentation by the Council for Scientific and Industrial Research, a state institution. The estimate is based on the Department of Mineral Resources and Energy’s evaluation price of the bids. It didn’t immediately reply to requests for comment.

“Power ships have proven effective at providing fast-response, emergency electricity — hence the maximum 10-year tenor for past contracts,” said Antoine Vagneur-Jones, an analyst at BNEF’s energy transition policy team for Europe, Middle East and Africa. “That the South African government would procure one for 20 years speaks to the depths of the country’s power crisis, and questionable long-term planning in light of dropping renewables costs.”

The agreement also allows for variable charges, including fuel. “Costs are kept low by Karpowership’s reach into the LNG market and an exclusive, long-term deal with Shell,” the company said in reply to questions.

The REIPPPP is most advanced and already making a significant contribution to power supply in the country.