The mass gatherings outside Zuma’s home have left ordinary South Africans furious, with many asking why police allowed so many people to break lockdown regulations.   Many of  the supporters were seen not wearing masks with very little social distancing being observed outside his KwaDakudunuse homestead.     Zuma addressed the media from his homestead, where he criticised a Constitutional Court judgement that sentenced him to a 15-month jail term for being in contempt of court, referring to it as unjust. 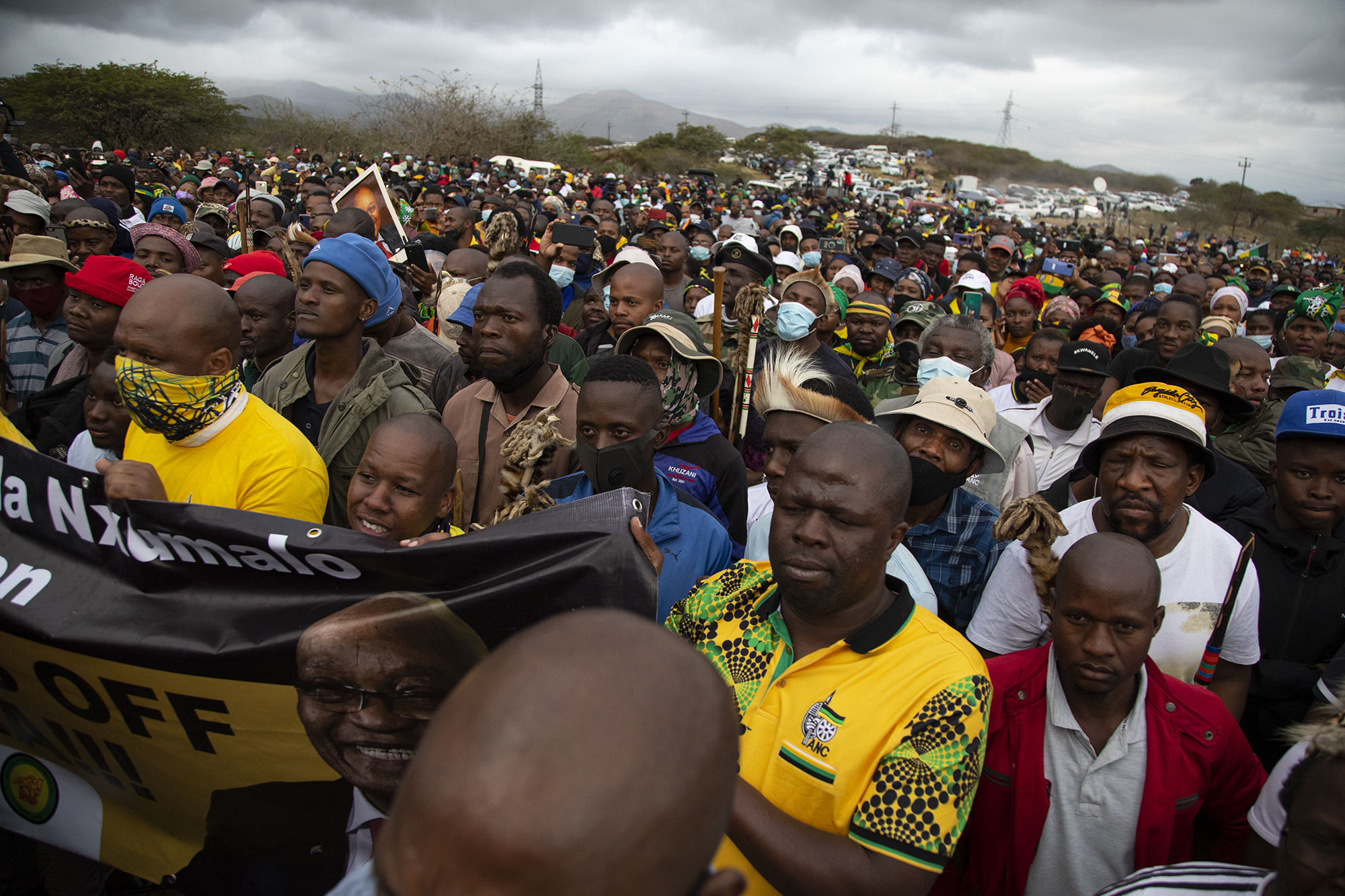 The insulting of Ramaphosa, using Zulu expletives, happened around 11am on Sunday while one of Zuma’s sons, Duduzane, the twin brother of Duduzile, was doing a live interview with the media.

While all was going well, Duduzane then granted the media an interview. As he spoke, some of the supporters around him started uttering slogans insulting Ramaphosa and calling him derogatory names. Not spared from the insults was Sihle Zikalala, the provincial chairperson of the ANC in KwaZulu-Natal.

The media were not spared either and were forced to end the interview with Duduzane.    Just when the situation was stabilising after Duduzane went inside the home, some unruly Zuma supporters started firing their guns in the air. The firing of the guns was heard in at least three different locations outside the home and it appeared that the illegal acts were co-ordinated.

Zuma was found guilty of contempt by the constitutional court last week – he had until yesterday to hand himself in – failing which the police had three days to effect arrest.

The former leader also said in spite of his age and ill health, all he sought was justice – arguing that he was not given a chance to air his side even though he refused to participate in Constitutional Court processes hearing the matter, instead opting to write open letters to the chief justice.

Former President Jacob Zuma has described his 15 months jail sentence from the Constitutional Court as a travesty to justice, comparing the courts in democratic South Africa to those in the apartheid era.   He has complained about the level 4 lockdown regulations comparing them to the state of emergency and expressed concerns over the country sliding into an apartheid-type rule.   He also shared some of his concerns should he go to jail: “Sending me to jail during the height of a pandemic at my age, is the same as sentencing me to death.”

Prince Mangosuthu Buthelezi, in his capacity as an elder statesman, is addressing the media on what is transpiring in Nkandla, around former president Jacob Zuma.
https://www.youtube.com/watch?v=DUGhe0d0DyQ

When one watches the people congregating at Nkandla, there is barely a face mask in sight. They are jeopardising their lives, and the lives of every one of us in whose midst they are living. That is the greatest irresponsibility of all,” he said.

Correcting history, Buthelezi did not spare Mgilija Nhleko, the famed “commander of Zulu regiments”, saying he was never installed in that position but was a mere headman (Induna) of the regiments.

Inkosi Mangosuthu Buthelezi has lashed out at the supporters of former president Jacob Zuma, saying their week-long behaviour in Nkandla was treasonous and made a mockery of the Zulu nation.

Buthelezi, while addressing an impromptu press conference in Ulundi, northern KwaZulu-Natal, and speaking as an “elder”, said that although he sympathised with Zuma and his family as he faced difficult times emanating from his Constitutional Court sentence, which earned him 15 months in prison, any lawyer would have known the consequences awaiting the former president if he refused to comply with the Constitutional Court’s order to appear at the State Capture Commission.

Giving some historical background, Buthelezi said Zuma was not the only senior leader to be sent to jail yet; when others in history were jailed, there were no rebellions. Among the many incidents of jailing was that of King Cetshwayo in 1879.

“Yet when King Cetshwayo was arrested and sent into exile, neither the king’s regiments nor his people threatened a physical uprising, for it would have been hopeless and end in utter destruction.”

Lashing out at Zuma supporters, he said they were committing a sin.

“The ghost of the fly” (video)

It was said the police will release a statement detailing progress of the police’s work on the matter. When asked when the statement would be released, he did not provide much detail.

Zuma was sentenced to 15 months in prison by the Constitutional Court on Tuesday.  He was ordered to hand himself over to the police within five days to begin his sentence, failure of which will force Cele and the National Police Commissioner Lieutenant General Khehla Sithole to force the arrest. 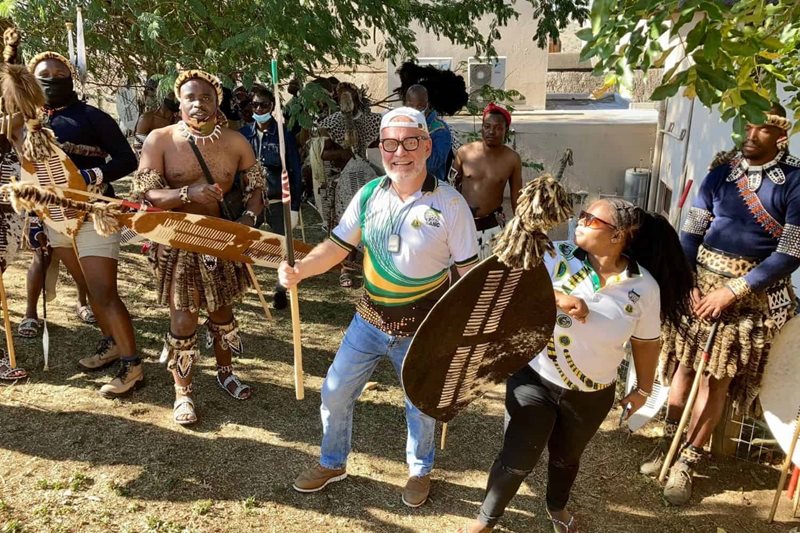 The Nkandla storm – a virus and political storm

Speak about the conflict in the ANC.

The ANC in KwaZulu-Natal says it hopes that the Constitutional Court will consider the arguments that former president Jacob Zuma has put forward in an application to rescind his impending arrest for contempt of court. KwaZulu-Natal ANC chairperson, Sihle Zikalala, and provincial secretary, Mdumiseni Ntuli, held a meeting with Zuma at his Nkandla residence. A large number of Zuma’s supporters have continued to gather outside Zuma’s home, to pledge solidarity with the former president. Suspended ANC secretary-general, Ace Magashule, was among those who visited Zuma. Earlier, the ANC cancelled its National Executive Meeting that had been scheduled for the weekend, and opted instead, to deploy some NEC members to KZN to work with the provincial officials as an intervention to the on-going impasse with its former president…. To help us unpack some of these political developments, we are now joined by Political Analyst Gogo Aubrey Matshiqi.

ANC, MK, Zuma and their struggle