The first Africans taken to the Americas went in small numbers, not directly from Africa, but via Spain and Portugal and the Atlantic sea islands. The development of Brazilian sugar plantations, however, created a growing demand for African slaves. Other Europeans settling their own colonies in the Caribbean and North America followed the Brazilian pattern and became slaveholders, creating profitable plantations that produced commodities for international markets. 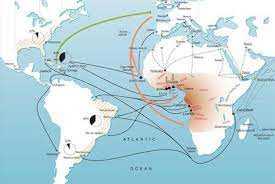 No slavery in South Africa

The form of slavery used in the Cape Colony and the Americas is called chattel slavery. Chattel slaves were obtained in the lands of their birth and taken against their will to different places where they were sold again.

These people were and could be resold, just as we do with property such as homes and cars today. Slaves had no say about to whom they could be sold. Because slaves were regarded as property, it is difficult to speak about slavery without using dehumanizing words such as commodity, cargo and owner to describe the system.

There are no written testimonies from the enslaved Africans on the “San Juan Bautista” in 1619, but later accounts shed light on the brutal experience of captivity on slave ships. Olaudah Equiano, an African man who was kidnapped in present-day Nigeria and sold into slavery, described his transatlantic journey in his autobiographical narrative in 1789. When he boarded the slave ship, he recalled seeing “a multitude of black people of every description chained together, every one of their countenances expressing dejection and sorrow.” They endured wretched living conditions and physical abuse during the journey that led to extreme suffering and illness. Some slaves even committed suicide by jumping into the ocean, an act that Equiano says showed they “preferr[ed] death to such a life of misery.”

These enslaved men and women were forced aboard a vessel called the “San Juan Bautista” that was headed for Mexico. While at sea, the ship was assailed by two armed English ships. The crews captured between 50 and 60 of the enslaved Africans. Both privateers then traveled to Point Comfort, where the first ship, the “White Lion,” sold its human cargo in exchange for food. The second ship, the “Treasurer,” docked at Port Comfort a few days later and sold several more enslaved Africans. Jamestown’s governor, George Yeardley, and head merchant, Abraham Piersey, purchased African slaves at what Rolfe calls “the best and easyest rates they could.”

Four hundred years ago, the first Africans set foot on mainland English America. Held as captives first on a Portuguese slave ship and then an English privateer, they had endured a grueling journey across the Atlantic Ocean during the summer of 1619. They traveled from present-day Angola to Point Comfort, Virginia, where they were sold to the colonists of Jamestown. The arrival of enslaved Africans in colonial Virginia would shape not only the future of Jamestown, but also the subsequent development of the United States.

Power and prosperity in the Atlantic flowed from colonial settlements, and especially from slave colonies. Barbados, for example, (home to 50,000 enslaved people by 1700) proved the point. Bridgetown was, by then, the most prosperous town in British America. A century later, 118,000 Africans in Jamaica had made that island the jewel in the British Atlantic crown.

A similar pattern emerged elsewhere. In the French islands of Guadeloupe, Martinique, but especially Saint-Domingue (Haiti after 1804), the number of Africans imported was astonishing—some 140,000 had been settled in the French islands by 1700, and another 450,000 enslaved Africans in other non-Spanish Caribbean islands. Half a million had been landed in Brazil. The numbers of Africans shipped to North America were smaller. By 1750 about 145,000 slaves were working in Virginia and Maryland, mainly in tobacco, and another 40,000 were transported to South Carolina for work in rice cultivation.

Only about 6 percent of all Africans shipped across the Atlantic were taken to North America. The largest numbers went to Brazil and to the Caribbean. North American enslaved populations, however, soon increased naturally, enabling North American slave owners to acquire slaves not from slave ships but from local plantations and slave traders. The newly founded United States was home to 700,000 enslaved people (one million lived and toiled in Brazil at the same time).

The Oldest Kitchen in Louisiana. Like Whitney Plantation’s Big House, the kitchen was built in the late eighteenth century and stands as the oldest detached kitchen in Louisiana.
http://slaveryandremembrance.org/collections/object/index.cfm?id=OB0087

The plantation’s restoration was funded by the museum’s founder, John Cummings. A trial attorney from New Orleans, Mr. Cummings owned and operated the property for 20 years, from 1999 – 2019. He restored the plantation over a period of 15 years before opening it to the public.    In 2019, John Cummings donated the museum, which is now a 501(c)(3) governed by a board of directors. In its first five years, the museum has welcomed over 375,000 visitors from all over the world.

In 1712, there were only 10 Africans in all of Louisiana. In this early period, European indentured servants submitted to 36-month contracts did most of the work clearing land and laboring on small-scale plantations. This would change dramatically after the first two ships carrying captive Africans arrived in Louisiana in 1719. These ships, which originated in the West Coast of Africa, carried captive rice farmers who brought the agricultural expertise to grow Louisiana’s rice plantations into profitable businesses for their European owners. In addition to enslaved Africans and European indentured servants, early Louisiana’s plantation owners used the labor of Native Americans. In 1722, nearly 170 indigenous people were enslaved on Louisiana’s plantations. Marriages were relatively common between Africans and Native Americans. “Grif” was the racial designation used for their children. The Africans enslaved in Louisiana came mostly from Senegambia, the Bight of Benin, the Bight of Biafra, and West-Central Africa. A few of them came from Southeast Africa.

In 1795, there were 19,926 enslaved Africans and 16,304 free people of color in Louisiana. The German Coast, where Whitney Plantation is located, was home to 2,797 enslaved workers. After the United States outlawed the Atlantic slave trade in 1807, many captives came to Louisiana from the Upper South through the domestic slave trade.

Under French rule (1699-1763), the German Coast became the main supplier of food to New Orleans. German immigrants, white indentured servants and enslaved Africans produced the land that sustained the growing city. Enslaved Africans cleared the land and planted corn, rice, and vegetables. They built levees to protect dwellings and crops.  They also served as sawyers, carpenters, masons, and smiths.  They raised horses, oxen, mules, cows, sheep, swine, and poultry.  Enslaved people also served as cooks, handling the demanding task of hulling rice with mortars and pestles.  In plantation kitchens, they preserved the foodways of  Africa.

During the Spanish period (1763-1803), Louisiana’s plantation owners grew wealthy from the production of indigo. Indigo is a brilliant blue dye produced from a plant of the same name. This dye was important in the textile trade before the invention of synthetic dyes. It was also a trade-good used in the purchase of West African captives in the Atlantic slave trade.

Enslaved women worked in the indigo fields growing and maintaining the crop. Enslaved men typically worked to produce the dye from the plants. In order to create the dye, enslaved workers had to ferment and oxidize the indigo plants in a complicated multi-step process.

To begin, enslaved workers harvested the plants and packed the leaves into a large vat called a steeper, or trempoire. Once inside the steeper, enslaved workers covered the plants with water. After soaking for several hours, the leaves would begin to ferment. This process could take up to a day and a half, and it was famously foul-smelling. Enslaved workers had to time this process carefully, because over-fermenting the leaves would ruin the product. Once fermented, the leaves dyed the water a deep blue. Enslaved workers siphoned this liquid into a second vat called a beater, or batterie. In the batterie, workers stirred the liquid continuously for several hours to stimulate oxidation.

The core zone of sugar production ran along the Mississippi River, between New Orleans and Baton Rouge.  In the 1830s and 1840s, other areas around Bayou Lafourche, Bayou Teche, Pointe Coupee, and Bayou Sara, and the northern parishes also emerged as sugar districts despite the risk of frost damage.  In 1817, plantation owners began planting ribbon cane, which was introduced from Indonesia. This cane was frost-resistant, which made it possible for plantation owners to grow sugarcane in Louisiana’s colder parishes.

In 1822, the larger plantation owners began converting their mills to steam power. This was advantageous since ribbon cane has a tough bark which is hard to crush with animal power. 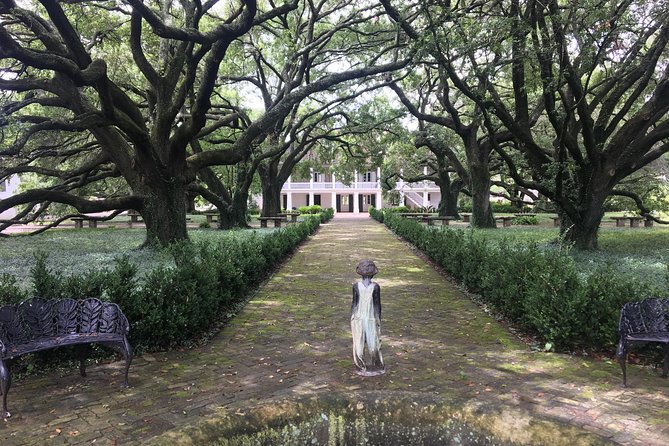 2015 – The first museum in America dedicated entirely to slavery opened a few months ago in Wallace, Louisiana. Michelle Miller visits the museum and found a surprising history, not only about the plantation, but her own family.

During the visit – a tour

… they then proceeded through a series of memorials that illustrated the scale of slavery on the plantation (through the names of all the enslaved people here), the scale of slavery in Louisiana, and the infant mortality among those enslaved. Again, it is the narratives of enslaved people written across the walls of the memorials that powerfully capture the quotidian indignities and horrors.

The Whitney Plantation Museum on Slavery