The Zondo commission will have until 12 March to file a replying affidavit, and until 15 March to file written submissions. The respondents have been given until 19 March to respond with written submissions of their own.   The Zondo  commission asked the court to impose a prison sentence on Zuma, who has been implicated 40 times and counting by witnesses testifying on the rent-seeking state capture scandal that mainly played out during his two terms as president.  It is not about personal relationships between them or women, it is about corruption.    Why must the big 6 get involved here – this is unconstitutional and unhuman. 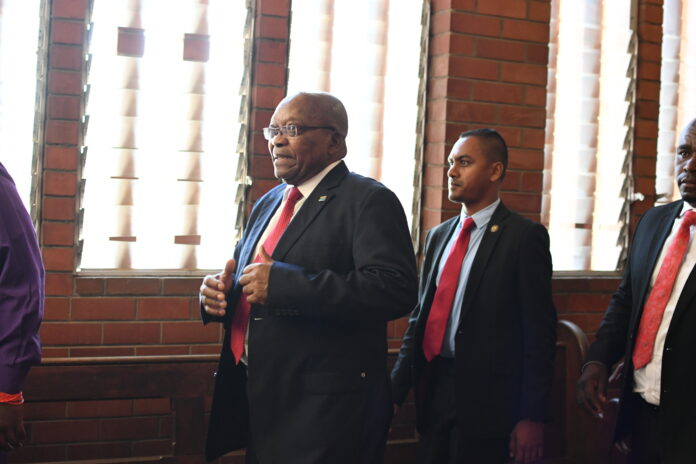 This type of corruption (state capture) is nothing more than irreparably sabotaging the country on an economic level and robbing it of everything, as well as robbing every citizen in this country of all human dignity and then expecting to get away with it.   And the ANC top 6 are assisting with this kind of sabotage.

There is and is no respect for another man’s money (tax payers), and these are taxes that have been and are being abused and taken over years.  They are allowed by presidents of South Africa and Zuma is certainly not the only one following that path.

If the presidents of South Africa were really serious about stopping corruption, but on the same time involved, why is there still an Eskom that shuts down power while there is enough power.   And Eskom is not the only one.   Thus, every entity is abused with black empowerment to have every business and company close their doors. This is true at all levels of government as well.   Black empowerment assistants and their supporters to kill this country – a communist revolution.

On 28 January, the court granted the Zondo commission an order compelling Zuma to cooperate with all future summonses and directives. The judgment included a stinging rebuke of Zuma for defying the state capture inquiry and, along with it, the rule of law.

But the court also reprimanded the commission for having been too lenient towards the former head of state while he stone-walled its approaches for more than two years.

The state capture inquiry has heard concrete claims that Zuma’s administration had set aside money for such bribes. An official report into the state of the country’s intelligence agencies under Zuma claimed that millions of rands were funnelled to sources in the judiciary “in order to influence the outcome of cases against President Zuma”.

Zuma, while president, appointed Zondo Commission and the presidents of SA appointed the Commissions.   Has nothing to do with “girlfriends” or treatments or relationships from Zondo.

The Zondo Commission was appointed by Zuma himself.  It was to “establish the truth regarding the fraud, corruption, state capture, etc.”   Is this really possible in a corrupt and failed state?
Zuma in action – his own Zondo Commission

It was stated in an article of DM that Zuma’s plan is to scuttle the State Capture inquiry so he can nullify the evidence already presented at the commission by questioning the integrity of the judge.     If he cannot scuttle the inquiry, he wants to prevent it from completing its deliberations without him giving evidence or responding to questions.

Soviet-trained and as a former member of the Central Committee of the South African Communist Party, Zuma knows how to use Marxist language to prevent himself from being tried in court for theft of public funds. The ideology of radical economic transformation is designed to whip up mass public support against the constitutional process among the very people who are most hurt by the destruction of the economy caused by the looting of public funds carried out by Zuma’s cronies.

Zuma’s main excuse for refusing to present himself in front of Deputy Chief Justice Raymond Zondo is his claim that once upon a time they had girlfriends who were siblings.   According to Zuma, Zondo will not treat him fairly because their former girlfriends were siblings!

This is Zuma, the man who has claimed he wants to clear his name in court from the time when Schabir Shaik, his former financial adviser, was arrested — up to now. Ever since Shaik was found guilty by the high court in Durban/eThekwini in 2005 for paying Zuma R1.2-million and for soliciting a bribe from the French arms company Thomson-CSE (now Thales), as well as guilty of fraud for writing off more than R1-million of Zuma’s unpaid debts, Zuma has found every trick, every excuse in the law books, to evade presenting himself before the commissions and the courts.    Interesting facts.  The man is a professional liar. When former Public Protector Thuli Madonsela asked him questions about his close friends and patrons, the Guptas, and their meetings with them at the Guptas’ mansion in Saxonwold, he refused to answer, unaware that Madonsela was tape-recording him.


ANC on Zuma and Zondo commission

OUTA released compelling case document which we have compiled in an effort to convince Parliament and other organs of state, including the Constitutional Court if need be, to have Jacob Zuma removed as the President of South Africa.

South Africans have become complacent about complaints of corruption in our government.

The allegations are endless but the accountability is nowhere.

For years, President Jacob Zuma has been at the centre of the worst corruption and state capture allegations, which he and his cronies brush off and a compliant law-enforcement system ignores.

When Members of Parliament have been asked to take sides in a vote of no confidence against the President, they have chosen the self-serving path of party politics and cushy employment rather than defence of the Constitution and accountable government. Another of those votes is now expected, and no doubt there will be a repeat of the pretence by Zuma’s defenders that there is no clear case against him.

We started with tracking and collating information that was publicly reported and often well known, moving on to legal reports and documents publicly available but insufficiently used and the records of appointments which show responsibility for decisions on lucrative and disgraceful state contracts. Recently, with the substantial trove of #GuptaLeaks documents, we added significantly to our investigation with e-mail trails, connections between cronies and culpability; for this we acknowledge the whistleblowers and the AmaBhungane journalists who started it.

The result is our case document, called “Nowhere to Hide: A President caught in the act”, with bulky annexures which cannot be misinterpreted and leaves no shadow of doubt: state capture is well advanced, it’s costing us tens of billions of rand and it’s criminal behaviour. This is a case file which should have be drawn up by South Africa’s prosecution services, if they had not been so preoccupied with in-fighting, building fiefdoms and defence of the powerful.

Report:  Used or manipulated state resources or appointments to avoid prosecution for
at least 783 charges;     Follow the Annexures as well on: 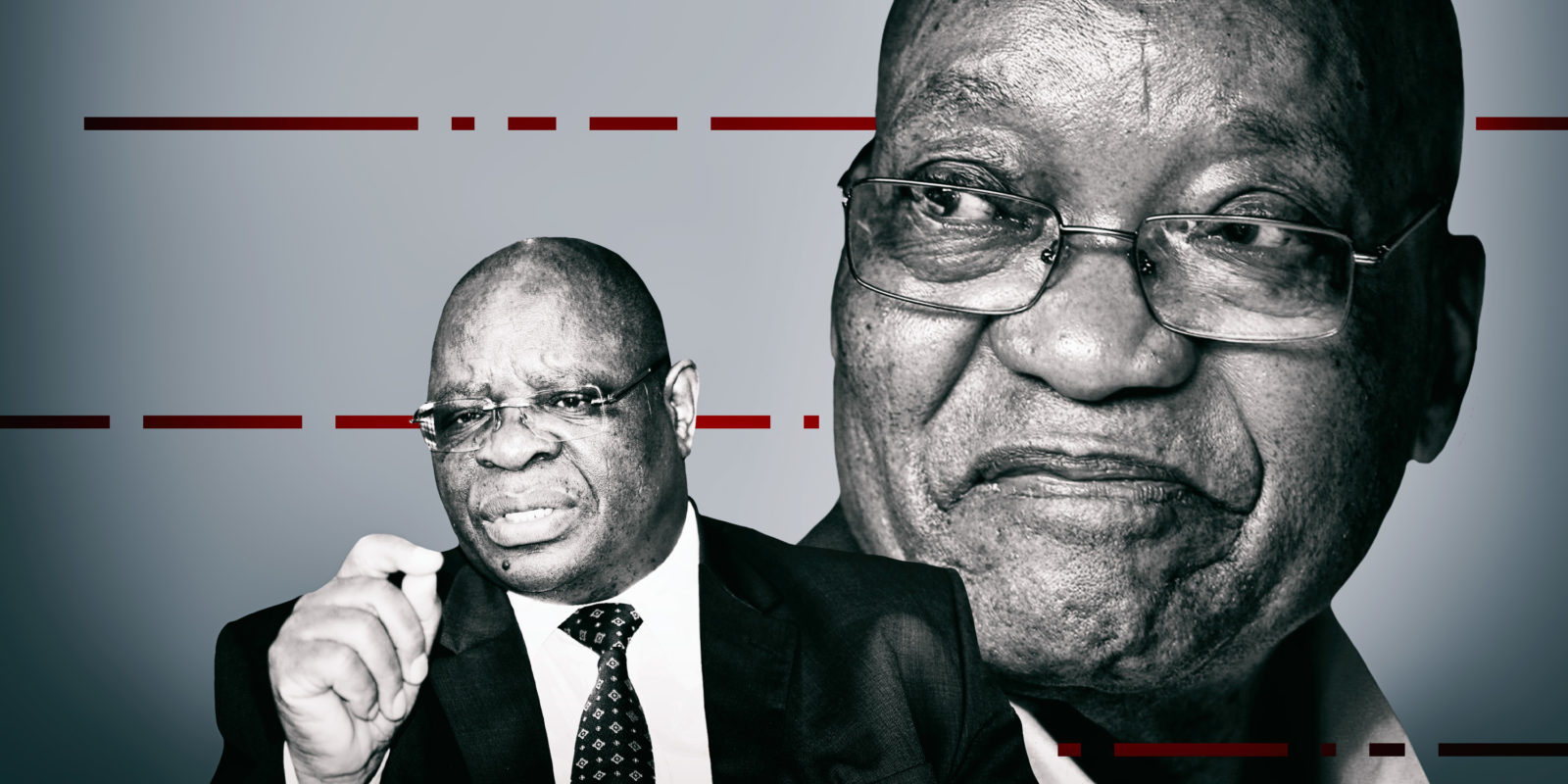 When Zuma was twice sworn in as president, he took an oath that he would “be faithful to the Republic of South Africa, and will obey, observe, uphold and maintain the Constitution and all other laws of the Republic.”
Zondo Commission – Zuma – 2021

The Nugent report of the Commission of Inquiry into Tax Administration and Governance barely scratched the surface in documenting the extent of damage state capture has inflicted upon the South African Revenue Service (Sars), with the man tasked with cleaning up and resuscitating the agency saying it was worse than imagined.
Damage state capture