It is an  ongoing liberal terrorist revolution.   The liberation movement called itself in their manifesto – an ANC revolution started before 1994 – actually before 1955 already and today,  it is worse than before.   A small bomb thrown at peoples’ houses  or a car bomb are all part of terrorism against the country and their citizens.  If you burn down a house or business it is terrorism.   And they all proud of what they are doing.  They rule South Africa. today.  How many of those were arrested and sentenced like the Boermag people? None. 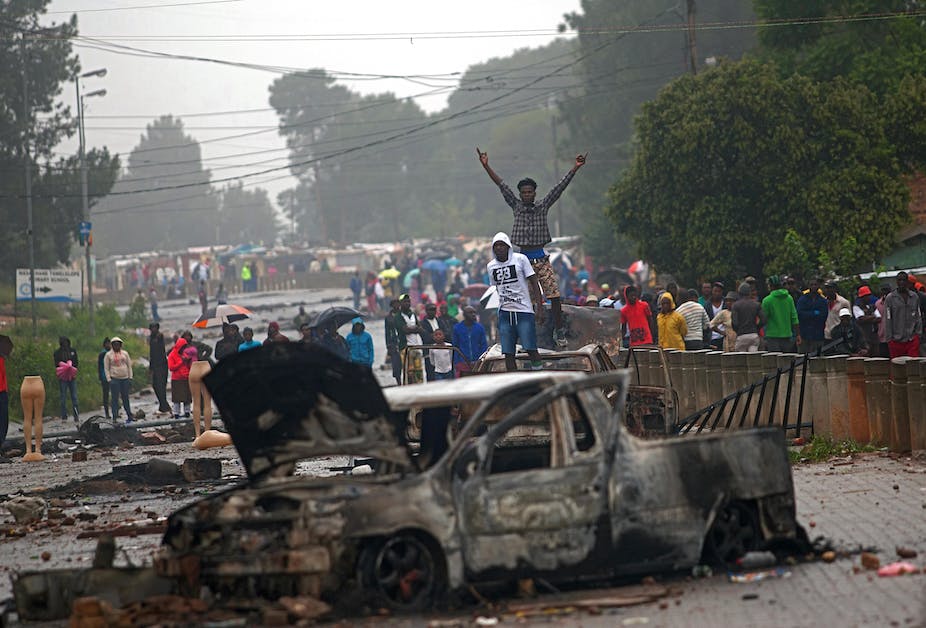 REVOLUTION SINCE 1955 AND EVEN BEFORE
ANC “Freedom charter 1955”

The so-called apartheid era was marked by violence and bloodshed. Some leaders would make compromises to avoid civil war.

He was killed by them.

An old news story from 1988 covering the bombings being carried out by the ANC and showing the explosive devices being used by them.

My Meeting with Nelson Mandela (1 of 2) Dr. Peter Hammond
https://www.youtube.com/watch?v=cTFhaUYmzV0/

My meeting with Nelson Mandela (2 of 2) Dr. Peter Hammond  https://www.youtube.com/watch?v=HKO7MmJ60zY

Directed by Clint Eastwood and starring Morgan Freeman as President Nelson Mandela, Invictus makes a major contribution towards the building up of the mythology of Nelson Mandela as a modern day idol. This stirring film on South Africas 1995 Rugby World Cup victory includes serious distortions of history. Time and again the film focuses on Mandelas imprisonment on Robben Island, often with dream-like imaginative flashbacks of Nelson Mandela breaking rocks on Robben Island.

The film even includes a pilgrimage to Mandelas cell in the prison on Robben Island, but there is never any mention of why he was imprisoned. Nelson Mandela was the head of UmKhonto we Sizwe, (MK), the terrorist wing of the ANC and South African Communist Party. He had pleaded guilty to 156 acts of public violence including mobilizing terrorist bombing campaigns, which planted bombs in public places, including the Johannesburg railway station.

Many innocent people, including women and children, were killed by Nelson Mandelas MK terrorists. Invictus never mentions Nelson Mandelas open support for brutal communist regimes such as Fidel Castros Cuba, Robert Mugabes Zimbabwe, Red China, Gadhaffis Libya, Saddam Hussein, Yasar Arafat and other dictators. During the very time covered by Invictus Mandela received Fidel Castro, the longest reigning dictator in the world, and gave him the highest award that South Africa could give and then had both Houses of Parliament gather to hear an address from the Cuban tyrant.

The Ugly Reality During the very time covered by the movie many hundreds of white farmers, and their wives and children, were being brutally murdered, actually tortured to death, often by UmKhonto we Sizwe guerillas, many of whom were now part of the South African National Defence Force. Double Standards Although Invictus gives all glory for the Springbok Rugby World Cup win to Nelson Mandela, it does not attach any blame to him for the rising crime and plummeting economy.

During one short visual in the film Mandela looks at a newspaper headline which speaks of the rising crime and plummeting rand. This reality deserved a little bit more attention.

During 46 years of National Party apartheid rule over 18,000 people had been killed by rioters, terrorists, by the police and the army, on all sides, including terrorists, civilian victims, military casualties and police.

A total of 18,000 dead during 46 years of conflict. However, in peacetime, under Nelson Mandela, an average of 20,000 to 25,000 people were murdered every year. Fueling the Crime Wave Yet to celebrate his birthdays, Mandela would regularly open the prison doors and set many criminals, including armed robbers, murderers and rapists, free. Some of whom were murdering and raping within 24 hours of being released.

But according to Invictus, no blame can be attached to Nelson Mandela for the economic deterioration and the sky-rocketing crime rate under his presidency. However, he should be given all the credit for what the Springbok rugby team achieved on the field! Legalising Abortion and Pornography Viewers of Invictus also need to be aware that the kind and thoughtful gentleman portrayed in Invictus was the prime mover of the legalisation of abortion, pornography, gambling and homosexuality in South Africa and of the introduction of sex education in public schools.

Since Nelson Mandela forced through the legalisation of abortion, not even allowing ANC MPs a conscience vote, and signed it into Law, 1 February 1997, over 900,000 South African babies have been killed through abortion, officially, legally and with tax-payers money.

Mandela, Mbeki and the Guptas