Erf, wind and fire: ‘We are grateful when God responds to black oppression,’ says BLF on Cape blazes   – remember Knysna fires?
Cape Town – Black First Land First (BLF) national spokesperson Lindsay Maasdorp, in reference to the recent devastating blazes around the Western Cape, has said that, because wind and fire are God-given elements, these could be seen as a form of justice for black people.
When Maasdorp posted the remark, some Facebook users were horrified.   “Inciting violence: this guy thinks that it is OK to tell people to burn white owned farms in CT,” posted a user, who tagged the SA Human Rights Commission.   “How disgusting is this post!” another wrote.

Maasdorp earlier had made a controversial statement on Facebook about the fires and was accused on the platform of inciting violence against white farm owners.   ”black god needs servants in CT: wind + matches + white owned farms,” read the post that on January 3, the same day Bezweni Lodge near Somerset West went up in flames which were fanned by strong south-Easter winds.

But in an interview with News24 on Friday, Maasdorp denied inciting violence.

‘We must thank God in good and bad times’

His view is that, because wind and fire are God-given elements, they could provide a sense of justice from the perspective of black people deprived of their land up to 400 years ago.

“We are grateful when God responds to black oppression,” said Maasdorp.

He said that if farmers felt blessed by God when it rained on their fields, then oppressed black people could feel blessed if white-owned farms burnt down.

“We must thank God in good and bad times,” he said, adding that the fires could be seen by the oppressed as proof that God existed.

He denied starting any of the fires or inciting anyone to do so.

On Monday, Co-operative Government and Traditional Affairs Minister Des Van Rooyen said the fires were most likely started by people and an investigation into this was underway,

But Enviro Wildfire Services, a private company which does forensic investigations into fires for insurance companies, cautioned against blaming anybody without evidence.

A company spokesperson could not immediately take a call as he was working at a flare-up line, but a company statement estimated that damages so far could be more than R100m.

Cause of fires still unknown

The fires could have been started by a cooking fire, burning the outer coating off copper wires or children playing – any manner of causes must be considered, the company said.

Merely being spotted running away from a fire did not mean that person was an arsonist, it cautioned.

More than 100 Working on Fire firefighters have been at the fireline for two weeks, with naval officers from Simon’s Town bolstering their forces this week.

Helicopters, fixed wing aircraft and residents have all been working to put the fires out.

Meanwhile on Friday, SA National Parks fire manager Phillip Prins said that the wind changing to a south-easter had caused a flare-up in Glencairn, near Simon’s Town, and another flare-up closer to the town. Firefighters were focusing on putting it out.

Working on Fire spokesperson Lauren Howard said fires had been contained by Friday, but weeks of keeping flare-ups under control still lay ahead.

Initial estimates were that 1600ha had been burnt in Simon’s Town and 3 000ha around Somerset West.

Since the fires started at the beginning of 2017, damage includes:

– 40% of Vergelegen wine farm, which was founded around 300 years ago, according to its website,

– Four holiday huts out of 200 at the Goudini Spa resort in the Slanghoek Valley, owned by the Afrikaanse Taal en Kultuur Vereeniging (Afrikaans language and culture society), near Worcester;

– A childhood home of Afrikaans literary figure and language promotor Totius in the Paarl region;

– Druk My Niet wine estate in Paarl, which was first bought by Huguenot Francois du Toit in 1692, according to the company’s website, and is now owned by the Kirchners, originally from Germany.
https://www.politicsweb.co.za/news-and-analysis/burning-of-white-farms-gods-work–lindsay-maasdorp

“If a farm is owned by black people, curse the gods. If white-owned, it must burn.” This is the message posted on social media by Lindsay Maasdorp of Black First Land First. Knysna is a disaster area, and some people are continually being insensitive and raising suspicion. 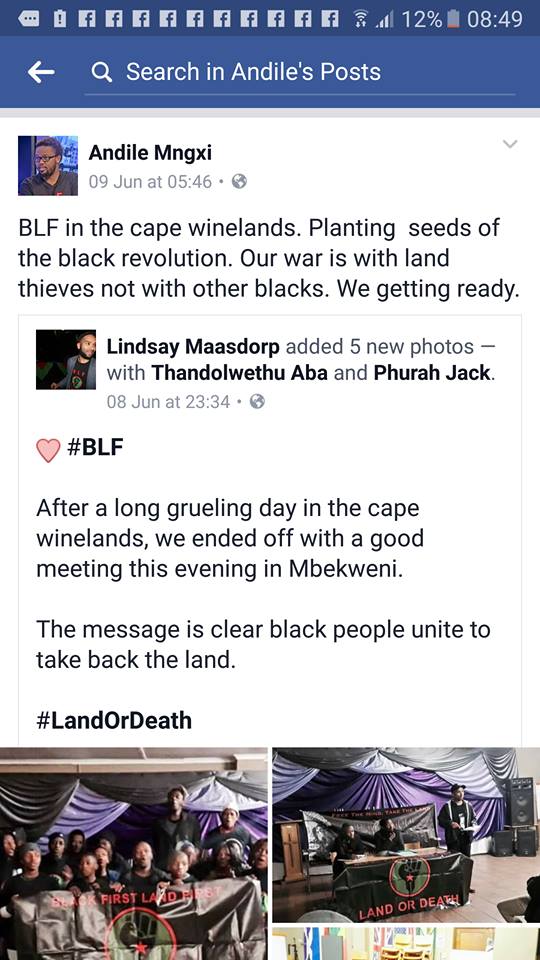 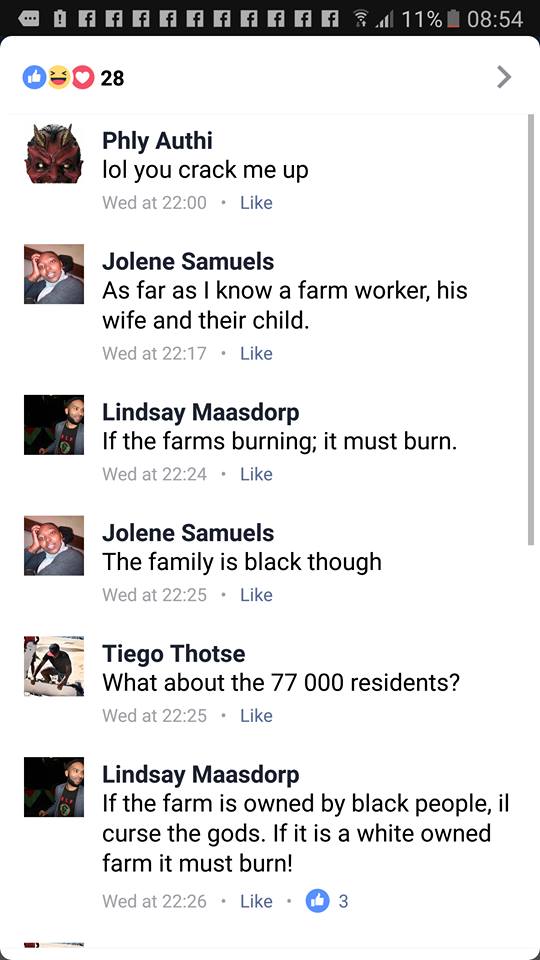 Several other fires have flared up and raised a question of whether it is possible for so many fires to start on their own at different locations?

There are reports that a forensic investigator believes arson is the cause of the Knysna Fires. However, the police rubbish these claims.

During December there were more than 40 fires reported in the Knysna area, and helicopter pilots battling the blazes spotted children starting forest fires. These same children then returned to help the firefighters put out the fires. Some of the fires were caused by negligence and some caused by arson.

The fire at Signal Hill in January this years was arson, and a teenage boy was identified by the locals of starting this terrible fire.

There have been reports that several fires in and around the Western Cape were caused by arson and the current fires at Knysna could be due to arson.

When posts over social media smack of hatred for white people, then the fear of arson becomes a reality. Although the gusty winds are also responsible for the fires flaring up, and as the firefighters work under severe situations, it is disgusting that people take this disaster and turn it into a racial/land claim element.