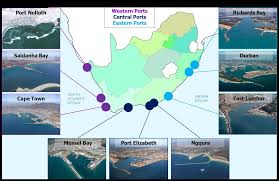 Is the road, rail and port transport too much for all the black empowerment officials to handle and is it a much easier option to claim there was a hijacking of their systems to stop import and exports, to make sure food is part of that.  They all knew what was in that containers. … END_OF_DOCUMENT_TOKEN_TO_BE_REPLACED

According to a statement by the South African Meat Processors Association (Sampa) and the South African Association of Meat Importers & Exporters (Amie SA), there are currently 290 temperature-controlled ‘reefer’ containers that require an urgent cold storage remedy, with more containers en route from international markets set to offload at the Durban port.  *… END_OF_DOCUMENT_TOKEN_TO_BE_REPLACED

It is not just ports that are closed to improve South Africa's economic condition - no trade means no growth at all. All businesses are closed in KZN province, schools and residential areas are also targeted and burned. Many houses are in ruins. Large shopping centrums, housing hundreds of small businesses have been destroyed… END_OF_DOCUMENT_TOKEN_TO_BE_REPLACED

Please avoid most of the roads but also the Shongweni road around the Shongweni area. Road closed due to Rock Falls and can be extremely dangerous. *** Ntshongweni area. https://www.facebook.com/stormreportsaOFFICIAL/videos/417352002176589/ *** From Rupert Sebire Road to Ntshongweni this am just past farmers market *** From Michael Nelson Umgeni River - KZN https://www.facebook.com/stormreportsaOFFICIAL/videos/2694207037287812/     ***… END_OF_DOCUMENT_TOKEN_TO_BE_REPLACED

West Street was named after Sir Martin West, Lieutenant Governor of Natal from 1845 to 1849. When Natal was annexed to the Cape of Good Hope in 1845, Martin West who was formerly the Civil Commissioner for Albany in the Eastern Cape and Resident Magistrate at Grahamstown, was appointed to this position. West Street became… END_OF_DOCUMENT_TOKEN_TO_BE_REPLACED