Kibbutz Ramat Yohanan – Jan Smuts.      A Kibbutz (Hebrew: קיבוץ), plural Kibbutzim (Hebrew: קיבוצים), from the Hebrew word meaning “gathering” or “together,” is an Israeli collective community.   The Kibbutzim movement combines socialism and Zionism in a form of practical Labor Zionism, founded at a time when independent farming was not practical. Forced by necessity into communal life, and inspired by their own socialist ideology, kibbutz members developed a pure communal mode of living that attracted interest from the entire world.

The kibbutz system was established at the end of 1931 and was named for Jan Christian Smuts, a former Prime Minister of South Africa. He was an ardent Zionist sympathizer and one of the first politicians who supported the creation of the state of Israel.   It is a secular kibbutz in the north of Israel, about half an hour from Haifa. Today about 950 people work on the kibbutz.

On the kibbutz, there is a big plastic factory (Palram), an herb and spices factory, avocado fields, orchards, other fields for crops, video studio, cow barn for dairy and beef, welding and carpentry shops, and more.

For the convenience of the Kibbutz members and Ulpan students, there is dining room, supermarket, ATM, clinic (with insurance Clalit), salon, physical therapy, soccer field, basketball court, tennis court, pub, etc. There is a fitness park located a few minute’s walk from the Ulpan.  There is also a synagogue at neighboring kibbutz, Kfar Maccabi.

History: In April 1948, the Druze began an offensive attack on Ramat Yohanan. There was a hard battle at the kibbutz against the Druze based in the city of Shfaram. The Druze attacked Ramat Yohanan and other neighboring kibbutzim in order to try to take over the roads leading to Haifa.  Casualties were suffered from both sides. With the help of the Hagana, the battle stopped at Ramat Yohanan and a non-aggression treaty was signed with the Druze.  Throughout the kibbutz, there are scattered defense towers and hidden stashes of weapons that were used by the kibbutz to defend itself in the War of Independence.

Kibbutz Ramat Yohanan. Hills and orchard near the kibbutz. 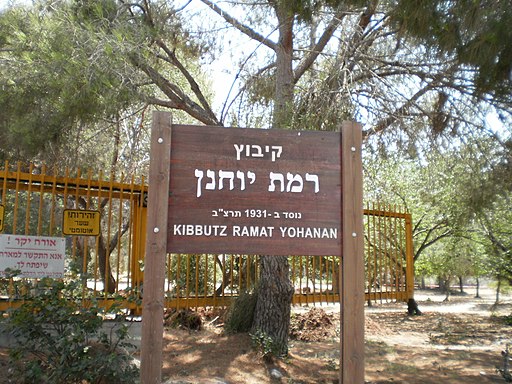 Did you know that Jan Smuts has a kibbutz named after him because of his support in founding the state of Israel, and that this kibbutz was at the centre of the 1948 Arab Israeli War (or sometimes known as the Israeli War of Independence)?    Jan Smuts was a supporter of the Balfour Declaration, first adopted in November of 1917 and then again reaffirmed in 1922 in the League of Nations British Mandate for Palestine which set forth British policy towards the establishment of a Jewish national homeland in Palestine.

Smuts became personal friends with Chaim Weitzman, who would go on to become the first President of Israel and Smuts and he saw to it that his government voted in the United Nations in support of the creation of the State of Israel. As a consequence of this a Kibbutz near Haifa is named after him, Ramat Yohanan.

Kibbutz members took pleasure in bringing the land back to life by planting trees, draining swamps, and countless other activities to make the land more fertile. In soliciting donations, kibbutzim and other Zionist settlement activities presented themselves as “making the desert bloom.”

Of particular interest was their collective mode of child-rearing, in which the children, like all their property, were considered as under collective ownership and responsibility. The Children’s Societies provided a place and adults who raised all the children together, meeting their parents only at scheduled visits.

While the kibbutzim lasted for several generations as utopian communities, most of today’s kibbutzim are scarcely different from the capitalist enterprises and regular towns to which they were originally supposed to be alternatives. Today, farming has been partially abandoned in many cases, with technology industries commonly replacing them. Nuclear families have replaced the Children’s Societies.

Though the kibbutz movement never accounted for more than seven percent of the Israeli population, it did more to shape the image Israelis have of their country, and the image that foreigners have of Israel, than any other Israeli institution.

Ideology of the Kibbutz movement

The spiritualism of the pioneers of the kibbutz movement consisted of mystical feelings about Jewish work, articulated by labor Zionists like Berl Katznelson, who said, “everywhere the Jewish laborer goes, the divine presence goes with him.”[1]

In addition to redeeming the Jewish nation through work, there was also an element of redeeming Eretz Yisrael, or Palestine, in the kibbutz ideology.

Even prior to the establishment of the state of Israel, kibbutzim had begun to branch out from agriculture into manufacturing. Kibbutz Degania, for instance, set up a factory to fabricate diamond cutting tools; it now grosses several million dollars a year. Kibbutz Hatzerim has a factory for drip irrigation equipment.

Hatzerim’s business, called Netafim, is a multinational corporation that grosses over $300 million a year. Maagan Michael branched out from making bullets to making plastics and medical tools. Maagan Michael’s enterprises earn over $100 million a year. A great wave of kibbutz industrialization came in the 1960s, and today only 15 percent of kibbutz members work in agriculture.

Although Smuts had originally advocated racial segregation and opposed the enfranchisement of black Africans, his views changed and he backed the Fagan Commission’s findings that complete segregation was impossible. Smuts subsequently lost the 1948 election to hard-line Afrikaners who created apartheid. He continued to work for reconciliation and emphasised the British Commonwealth’s positive role until his death in 1950

South African supporters of Theodor Herzl contacted Smuts in 1916. Smuts, who supported the Balfour Declaration, met and became friends with Chaim Weizmann, the future President of Israel, in London.

In 1943 Weizmann wrote to Smuts, detailing a plan to develop Britain’s African colonies to compete with the United States.

During his service as Premier, Smuts personally fundraised for multiple Zionist organizations.    His government granted de facto recognition to Israel on May 24, 1948 and de jure recognition on May 14, 1949.

However, Smuts was deputy prime minister when the Hertzog government in 1937 passed the Aliens Act that was aimed at preventing Jewish immigration to South Africa. The act was seen as a response to growing anti-Semitic sentiments among Afrikaners.

He lobbied against the White Paper.

Several streets and a kibbutz, Ramat Yohanan, in Israel are named after Smuts.

Smuts’ wrote an epitaph for Weizmann, describing him as the greatest Jew since Moses.”

Great as are the changes wrought by this war, the great world war of justice and freedom, I doubt whether any of these changes surpass in interest the liberation of Palestine and its recognition as the Home of Israel.

In the harsh conditions of the First Aliya with the struggle for Jewish Labor and conflict between the workers and farm managers, the “Hadera Commune” accepted the proposal of Dr. Arthur Ruppin, head of the Zionist Federation’s Land of Israel Office, to work the lands of Umm Juni independently, under their own responsibility. Thus was founded Degania, “The Mother of the Kibbutzim”, laying the foundations for the cooperative settlement movement in Palestine.

“On the 25th of Tishrei, 5671 (1910) we have arrived, ten men and two women, to receive the inventory from the “labor conquest group”. We have proceeded to establish an independent settlement of Jewish workers in the national homeland – a Commune.”

As the first Kibbutz Degania is a landmark in the history of the Zionist movement and the state of Israel.

It was there that the principles of independent work and collective life materialized. After Degania, hundreds of kibbutzim were established, drawing the borders of a state on its’ way, the state of Israel. Some of those groups’ members received their training on Degania.
Although Degania is known as “the mother of the collectives and the kibbutzim”, Degania also differs some in her way of life from the other kibbutzim and collectives which arose after her. Contrary to the other Kibbutzim, Degania kept the children in the family core and never had separate sleeping quarters for the children – they always slept at home within the family unit. Hired labor always existed in Degania, and Degania was known in her liberal approach with understanding of the needs of the individual.
From the beginning of its existance Degania was allways evolving. During the past few years, this procesee has advanced quickly, of which at the end she will emerge as a different Degania.