Why is there so much conflict, especially in the middle east?   When Mark Sykes and François Georges-Picot met in London and took a pen to a map of the Middle East 100 years ago this week, only one of them had ever been there. It was, some say, as if the two were playing a game of Risk.   From Israel’s point of view, she says, the lines drawn are colonial lines, lands conquered by the British and the French in 1917.     They stated it is their heritage, borders defined by somebody outside, not by the peoples of the Middle East (Ottomans empire). 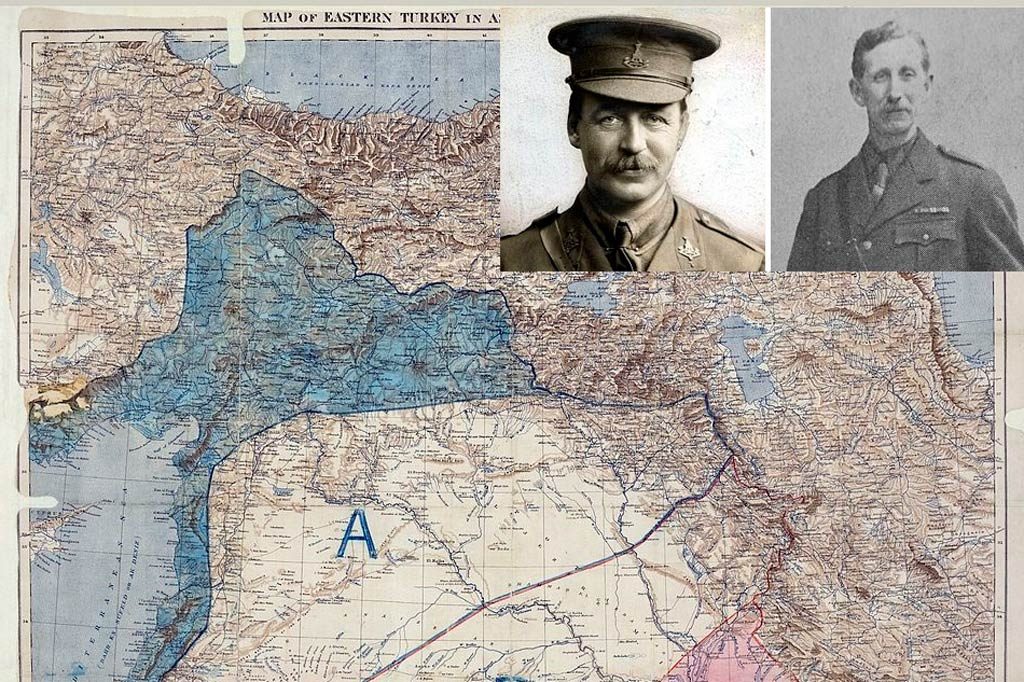 In 1915 — that year of Gallipoli, which forced the resignation of First Lord of the Admiralty Winston Churchill — Britain, to win Arab support for its war against the Ottoman Turks, committed, in the McMahon Agreement, to the independence of these lands under Arab rule.

In November 1917, however, one month before Gen. Allenby led his army into Jerusalem, Lord Balfour, in a letter to Baron Rothschild, declared that His Majesty’s government now looked with favor upon the creation on these same lands of a national homeland for the Jewish people.

Between these clashing commitments there had been struck in 1916 a secret deal between Britain’s Mark Sykes and France’s Francois Georges-Picot. With the silent approval of czarist Russia, which had been promised Istanbul, these lands were subdivided and placed under British and French rule.

France got Syria and Lebanon. Britain took Transjordan, Palestine and Iraq, and carved out Kuwait.

The Unraveling of Sykes-Picot

Alongside the French and British portions, Palestine – the Holy Lands – came under a supposedly “international” section, the line drawn from Haifa (Acre/Akko) to Kirkuk, the heart of the Kurdish area, which may soon declare itself an independent state, and where Kurds are currently leading the fight against Islamic State.

One hundred years ago, this was “a place, a nation, a people, a language, a culture, with Christians, Jews and Muslims,” says Eisin, noting similarities with Israel. But their mountainous homeland was divided between Syria, Turkey, Iraq and Iran. “If I was Kurdish, and wanted to make a statement,” she says, “I’d declare Kurdistan this year, 100 years after it was wiped off the map. The Kurds existed in 1916, but they didn’t really matter to the British and French.”

“The Balfour Declaration was the first attempt to unravel Sykes-Picot,” he says. “Israel would never have been born if Sykes-Picot had remained [in-place].” Former Israeli ambassador Freddy Eytan says the region became one of confrontation in part because of “the rivalry between the US and USSR, the control of natural resources, gas and oil, the arms race, arms supplies and freedom of navigation in the Suez Canal” which “all prompted a power battle”. The centenary, he says, is “a reminder to avoid the naiveté and mistakes of the past”.

The Ottoman Empire was a vast territory in the Middle East, Arabia and Southern Central Europe.   A secret agreement was struck on 19 May 1916 between the British and French governments to divide the Middle East into spheres of influence at the conclusion of World War I.   Negotiations began in November 1915, coordinated by the British diplomat Sir Mark Sykes along with his French counterpart, Francois Georges Picot (hence the name Sykes-Picot), in London.

Its provisions stated that :

(1) Russia should acquire certain Armenian provinces, with some Kurdish territory to the southeast;

(2) France should acquire Lebanon, certain Syrian provinces and other areas in Turkey and Iraq;

(3) Great Britain should acquire southern Mesopotamia, including Baghdad, and also the Mediterranean ports of Haifa and Acre;

(4) between the French and the British acquisitions there should be a confederation of Arab states or a single independent Arab state, divided into French and British spheres of influence;

(5) İskenderun, in Turkey, should be a free port; and (6) Palestine, because of the holy places, should be under an international regime.

This secret arrangement conflicted with pledges already given by the British to the Hussein bin Ali, Sharif of Mecca. He was prepared to bring Arab groups against the Ottoman Empire on the understanding that the Arabs would be granted self-rule and a more important share of land. Therefore, the Sykes-Picot Agreement was seen as a betrayal by the Arab peoples of the Middle East when its double-dealing was revealed.

The Kurds as well ..

“The Kurdish Tribes of the Ottoman Empire” by Mark Sykes, The Journal of the Royal Anthropological Institute of Great Britain and Ireland Vol. 38 (Jul. – Dec., 1908).

The best evidence of how heavily stacked the deck was against Kurdish independence comes from the many other proposals for the regional borders floated at the time of Sykes-Picot, all of which in one way or another denied the Kurds an independent nation-state.

Turkish government spokesman Omer Celik made the somewhat confusing case that a new Kurdish state would “only lead to the further reinforcement of the artificial agenda that Sykes-Picot created.” In explaining the alternative, however, he was more persuasive, suggesting that instead of redrawing borders “what we need to consider in this region is how all ethnic groups and all sectarian groups can create new zones of prosperity that go beyond borders, while also respecting existing borders, new freedoms, new political approaches and new cultural integrations.”

The Kurds and Arab belt