If you do not know who is Soros – find out and who is in charge of South Africa as well as the land, minerals and restitution – nationalization of lands
Soros and Ramaphosa

Buthelezi of the IFP Ingonyama trustland and is in support of land expropriation – Good for all the Zulus that live on that lands since 1854.  Then all trustlands and lanclaims must be open to all of the people – most of those lands have only “communal rights” – give the people title deeds.   Both are open just to certain people in this country and not open to all.   Blacks created their own separate lands (segregation) since 1854 and not the whites or Verwoerd.
Buthelezi and land expropriationa

***
ABOUT THE MOTION OF LAND RESTITUTION WITHOUT COMPENSATION

This vote follows the report’s adoption by the National Assembly on Tuesday, with 209 MPs in support of the adoption of the report and 91 against.

Fana Vincent Mlombo, representing the provincial legislature of Mpumalanga at the NCOP, said the party “supports the expropriation of land without compensation because we want future generations of South Africans to have ownership of the means of production”.

Now that the report has been adopted, a member of the executive or a member of the National Assembly can introduce a Bill to amend the section.  ANC MP Vincent Smith, the former co-chair of the constitutional review committee, told SAFM on Wednesday morning the debate on land “cannot wait any longer”.

When asked whether the joint committee had followed the correct protocol on accepting the report, Smith said, “When you went out into the field, the people’s arguments were far more potent.”

“Land has been central to the struggle for many years.”

The process to amend the constitution is expected to take some time, but ANC Lewis Nzimande, the co-chair of the joint constitutional committee, has urged that the process is concluded before the elections in May.  “The house must urgently establish a committee to take further this matter. Further, we resolve that this matter is concluded before the rise of this fifth parliament,” Nzimande said.

The process of amending the Constitution

The process to amend Section 25 began in February this year with a motion from the Economic Freedom Fighters, which was led by Julius Malema, calling for the establishment of a parliamentary ad hoc committee to review and amend the Constitution after hearing public submissions from policymakers, academics, civil society and the public.

The joint committee engaged the public over the issue and adopted a report that recommended the expropriation of land without compensation on November 15.

Once introduced, the statement noted, the individual who introduced the Bill will submit any written comments from the public on the Bill to the Speaker of the National Assembly and the chairperson of the National Council of Provinces. 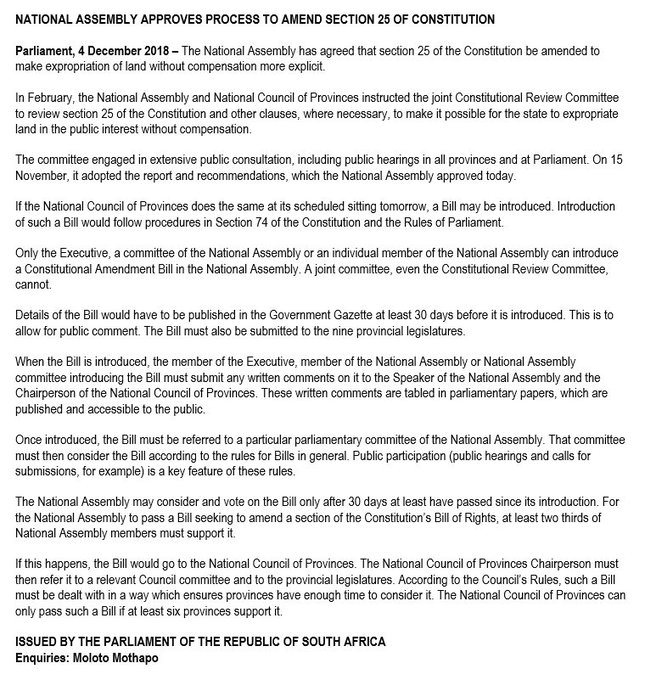 The Bill will also be subject to a Parliamentary committee of the National Assembly where the Bill will be considered “according to the rules of Bills in general. Public Participation (public hearings and calls for submissions) is a key feature of these rules.”

The Bill, the statement reads, “must be dealt with in a way which ensures provinces have enough time to consider it.” The Bill is only passed if at least six provinces, out of the nine, support it.

The Democratic Alliance (DA) announced on Tuesday that they would approach the courts following the adoption of the constitutional review committee report.

However, they would take a different approach to Afrikaner nationalist group AfriForum.

AfriForum’s application to interdict the report from being debated in both houses of Parliament was dismissed by the high court in Cape Town.

During a press briefing on Tuesday, the DA said there were procedural flaws with the report.

“The written submissions report has not been finalised, yet the ANC and EFF approved the final report,” said DA MP Thandeka Mbabama.

DA MP Annaleigh Lotriet told SAFM on Wednesday morning: “There was no real debate on this” referring to the report compiled by the joint constitutional review committee.

President Cyril Ramaphosa has announced that the ANC will spearhead an amendment to section 25 of the country’s Constitution to outline more clearly the conditions under which expropriation of land without compensation can be effected.

He emphasised that the property clause in the Constitution already enables  expropriation  of land without compensation in the public interest. The proposed amendment would be aimed at putting this beyond any doubt.

But what is the process that would have to be followed for such an amendment to be passed?

Like all modern constitutions, the South African Constitution provides for its own amendment by Parliament and prescribes special procedures to effect them. The Constitution has already been amended 17 times since it came into force in 1996, following this prescribed procedure.

Section 74(2) of the Constitution allows Parliament to amend any provision in the Bill of Rights – including section 25. But this cannot be done by a simple majority vote as would be the case for ordinary legislation. A Bill amending any provision of the Bill of Rights must be passed by the National Assembly, with a supporting vote of at least two thirds of its members, and by the National Council of Provinces, with a supporting vote of at least six of the nine provincial delegations.

This means that at least 266 members of the national assembly must support the amendment. The additional requirement that six of the provincial delegations in the National Council of Provinces must support the Bill in effect means that the party – or parties – wishing to amend the Constitution must control at least six of the nine provincial legislatures. This is because provincial legislatures give each provincial delegation to the National Council of Provinces a mandate on how to vote on constitutional amendments.

Some commentators have argued that an amendment to section 25 of the Constitution would have to be supported by at least 75% of the members of the National Assembly.

But this is incorrect, and confuses two things. It’s true that the founding values in the Constitution – set out in section 1 – can only be amended with a supporting vote of 75% of the members of the Assembly. But, as long as an amendment doesn’t affect the values in section 1 (specifically the Rule of Law) by allowing the arbitrary expropriation of property, a 75% majority wouldn’t be required.

Apart from the increased majorities required to pass an amendment to section 25, the Constitution also prescribes other procedure that must be followed for an amendment.

At the same time these details must also be submitted to the provincial legislatures to get its views. Only after this 30 day period can the Bill be formally tabled in the National Assembly. When it’s introduced in the assembly, the government must also submit any written comments from the public and the provincial legislatures to the Speaker for tabling in the assembly. These must also be tabled to the chairperson of the National Council of Provinces.

facilitate public involvement in the legislative and other processes of the National Assembly and its committees.

The Constitutional Court held that this imposed a duty on the assembly and the National Council of Provinces to act reasonably in ensuring the voices of ordinary people are heard before passing legislation.

The more important the Bill, and the greater the public interest, the more onerous the obligation to facilitate public involvement. The rules of the National Assembly and National Council of Provinces already provide for this and will therefore have to be followed.

This process could take some time to conclude as it can be time consuming to ensure extensive public involvement in the process.

Once the Bill amending the Constitution has been through all these steps, it’s then referred to the President for signing into law.

The governing party also held a land summit in May where it decided there was no need to amend the Constitution. Instead, it opted to test current legislation. This, the party explained, was because many believed Section 25 in its current form allowed expropriation of land without compensation.

President Ramaphosa’s qualifiers to amending Section 25 of the Constitution to enable land expropriation without compensation (EWC) were:

The Food Freedom Fighters (FFF) is inviting interested members of the public to add their names to this submission, which is a caveat to whatever amendments are made.  An explanation of the FFF’s business model may help:

In the Durban Metro alone, the city’s population grows at about 2 000 people a week (and only 15% of residents pay rates).  The FFF tackles urban migration’s impact on food security by buying the surplus crops of people who already grow food in their yards for private consumption, and selling it on to other consumers.  By doing this, the FFF catalyses an evolution in the relationship between the property-owner and the gardener from that of employer-employee to an egalitarian one of business partners.  This association begins with the conversion of all or part of the property-owner’s premises from, say, a non-utilitarian lawn, into a manicured vegetable garden.

Because the FFF buys the food from the gardener (not the property-owner), s/he “reaps” the financial value of land ownership without the initial owner losing the fact of land ownership.  Said gardener then becomes an urban farmer who, as a businessperson, can expand operations to all the gardens where she or he previously maintained only flowers.  This businessperson can employ people, too.

The homeowner’s role would be keeping the property agri-viable to maximise yields by facilitating steps to protect soil integrity, sustain water-saving practices, shelter plants from the elements and use clean energy to power irrigation and other aspects of the operation.  With the necessary paperwork complete, these actions would make the business partnership not only B-BBEE-compliant but also a microcosmic example of what a sound triple-bottom line looks like in terms of achieving economic justice, enhancing the physical environment and bringing about the empowerment of others in society.

Our submission envisages government as offsetting the initial costs of this exercise by designating participating premises as ‘protected environmental economic zones (PEEZ), a term coined by academic Helen Moffett when I was explaining the concept to her at the Franschhoek Literary Festival) and by constitutionally, legally defining complying owners as, let’s say, “ideal property-owners”.

If government can spend money on RDP houses, it makes sense to shift some of that money onto the set-up costs of PEEZs without unduly enriching their owners on the one hand, and without making them single-handedly shoulder the costs of the urban farmers’ scaling their operations up on the other.

Where (black) labourers enjoy most of the freedoms and financial value of the property that they would have enjoyed had they owned the property under discussion (and are therefore business partners on paper and in practice, not just labourers), the fact and title deed of property ownership should not be removed from owners who maintain those properties out of their own pockets, let alone moved to the state to be dangled in black people’s faces through leases that are not outright ownership.

For government to own property on the basis of political fiat, where it has not demonstrated restitutive stewardship over that property, is an abuse of political power gained through sheer majoritarianism.  This undermines Constitutional democracy and the rule of law.

To take land from the owners and give it to strangers from another Continent – Chinese?
Is this really Land expropriation?

Goverment ANC bought more than 5000 farms and still not give them to anybody – what is the real purpose? – nationalization of all land and properties
Grond eienaars: ANC regeringsplase

There are already 7.6 million black owners of properties with title deed, so it is impossible that the whites have most of the land
Die 7.6 miljoen swart titelakte houers