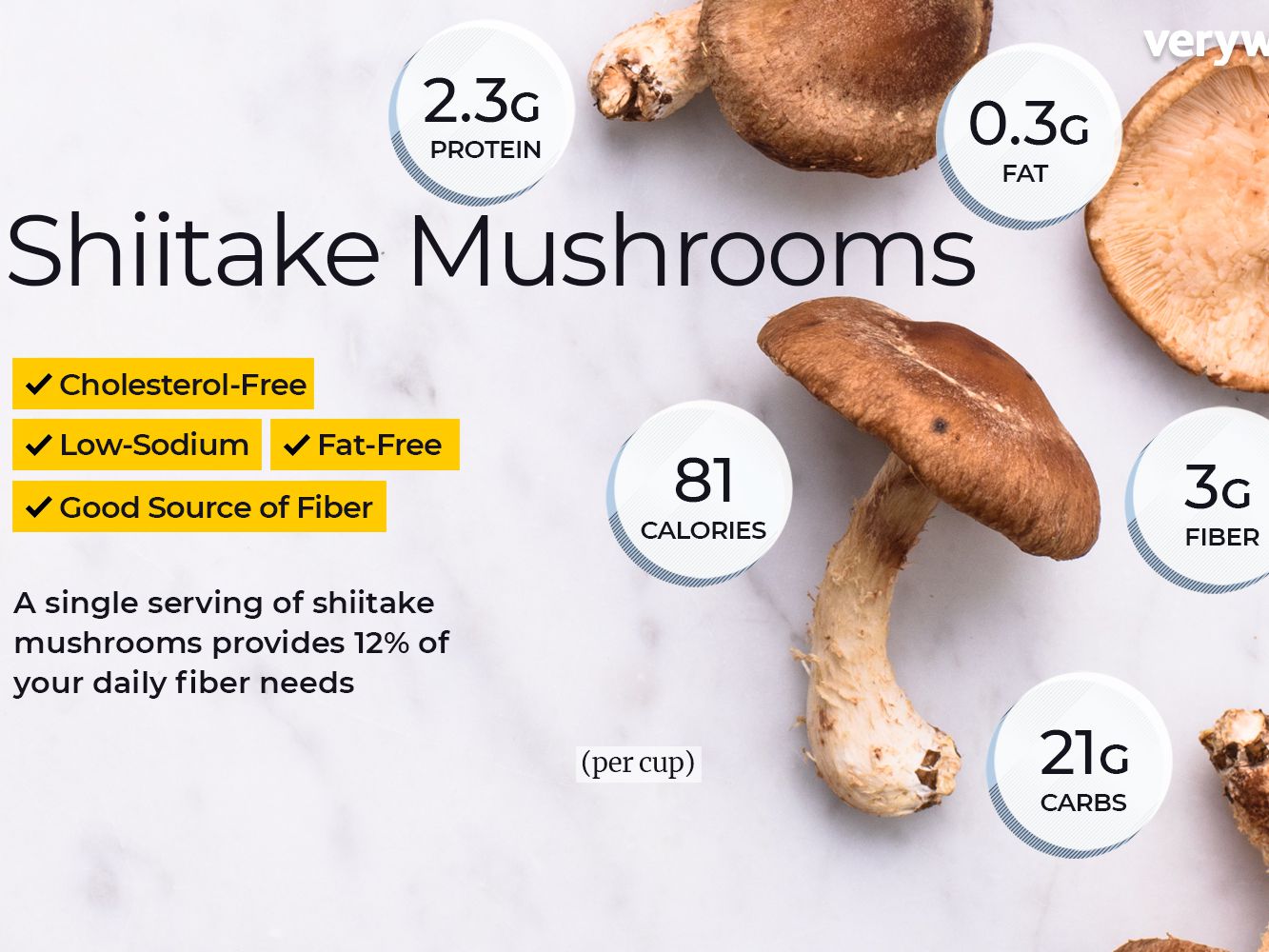 It is fat free,   fat free, saturated fat free, cholesterol free, low in sodium, and a good source of Zinc, Copper, Selenium, choline, vitamins D,  B2, B3 and B6, and phosphorous.

Mushrooms can be part of a healthy diet. By substituting mushrooms in recipes that call for meat, you can reduce your total cholesterol intake. Even if you can replace half of the meat in a dish with mushrooms, this will greatly reduce your consumption of cholesterol.  Research suggests a possible relationship exists between a compound in mushrooms called eritadenine and lower cholesterol values. However, research is still ongoing and needs to be evaluated in human subjects. The studies use shiitake mushrooms because they are known to be high in eritadenine.

Mushroom coffee has become a popular medicinal beverage made from a wide range of mushroom species such as Chaga, reishi, lion’s mane, and cordyceps, which purport many benefits. These mushrooms are classified as functional foods, which are those that promote health through specific natural compounds found in them.

The fruiting bodies of the mushrooms are extracted, dried, and ground into powder which is then added to instant coffee granules, roasted ground coffee beans, or pods. Mushroom coffee tends to be less acidic and less caffeinated than regular coffee, making it easier to drink and tolerate for some people.

People taking medications for diabetes may need to avoid cordycep mushrooms since together, they may cause an extreme drop in blood sugar levels (hypoglycemia).

There are around 40 types of oyster mushrooms, including Pleurotus ostreatus (or P. ostreatus), commonly known as the American oyster mushroom. All types are edible and are commonly enjoyed in dishes like pasta and stir-fries.

A type of beta-glucan fiber derived from P. ostreatus — has been shown to have immune-modulating properties. Plus, the mushrooms may boast antiviral and antibacterial effects.  Pleuran treatment has also been shown to significantly improve symptoms in children with recurrent respiratory tract infections and significantly reduce the incidence of upper respiratory tract infections in athletes.

The inhibition of angiotensin converting enzyme (ACE) activity was determined in vitro by mushroom-derived eritadenine (EA), which was analyzed in 11 principal Korean edible mushrooms.
https://pubs.acs.org/doi/abs/10.1021/acs.jafc.5b05869

Fruit bodies and mycelia of shiitake mushroom ( Lentinus edodes) have been shown to contain the cholesterol-reducing compound eritadenine.
https://pubmed.ncbi.nlm.nih.gov/18363329/

Dried mushrooms at 60 °C increased the concentration of EA by 90.7%.   The boiling process increased the total concentration of EA of dried mushrooms at 100 °C.  The amount of EA decreased drastically by treatments such as roasting and frying.  The autoclaving and hot water bath of dried mushrooms increased EA concentration 1.4 times.
Cardiovascular diseases are the main cause of worldwide mortality, high levels of cholesterol in the blood are one of the main risk factors for the development of these diseases.  The high importance is due to its therapeutic properties. These mushrooms are useful in the traditional Chinese medicine, where its integration into the diet produces beneficial effects as immunomodulatory, hypocholesterolemic, hepatoprotective, antibacterial, antiparasitic, antiviral activity, and anticarcinogenic.
https://www.sciencedirect.com/science/article/pii/S0023643818311125

This is how you inoculate a log with mushroom spore (mycellium). I show the preparation, the procedure of inserting the plugs, and the sealing of the log, along with the care of the log while waiting for the mushrooms to appear.

North Spore interviews and visits Max Boudreau at his farm in Falmouth, ME called Winslow Farm. Winslow Farm is a diversified vegetable operation that incorporates no till, organic, and permaculture farming practices. We talk with Max about his commercial shiitake log production, the costs of production, and the market for his mushrooms.

Learn how to grow shiitake mushrooms at home! In this video, I take some pre-colonized fruiting blocks and toss ’em in the fruiting chamber to get more shiitake then I know what to do with.