The psilocybin group of mushrooms, popularly known as magic mushrooms, shrooms or psychedelic mushrooms, is found in over two hundred varieties around the world. We know them today as a recreational drug used to induce hallucinations and a sense of euphoria, but the ancient origin of magic mushrooms goes back thousands of years. Let us take a look at some of the history that mankind shares with the psychoactive drug psilocybin and its host, magic mushrooms.
Maya mushroom stones. Credit: Dr Richard Rose 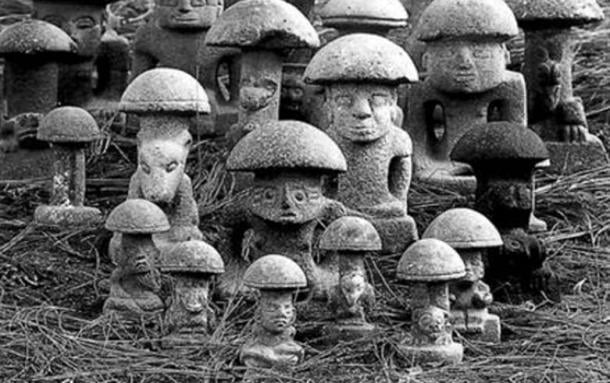 It wasn’t till the late 1950s that the Western civilized world got introduced to psilocybin. R. Gordon Wasson and Roger Heim, with help from Albert Hofmann, managed to extract and identify the two hallucinogenic drugs (psilocybin and psilocin) found inside the mushrooms, which they had collected from the Mazatec tribe while on an expedition in Mexico. In 1957, a piece with the title, “Seeking the Magic Mushroom” was published in Life magazine, where Wasson detailed his discovery of the mushroom and his findings. Once the drug gained popularity as a psychedelic substance, it became closely associated with the contemporary Hippie culture , where magic mushrooms were soon considered to be the gateway to spirituality.

Although it would be impossible to determine exactly when and where it first began, there is evidence in the form of stone paintings that Saharan aboriginal tribes of North Africa might have been using mushrooms from around 9000 BC. Similarly, rock paintings in Spain created about 6000 years ago suggest that the mushroom Psilocybe hispanica was used during certain religious rituals near Villar del Humo. It is very much possible that mushroom use by prehistoric cultures began even before that time, and we have just not found the evidence to suggest so yet.

Native American cultures like the Mayas and Aztecs had symbols, statues and paintings which indicate that they consumed psilocybin mushrooms, especially during religious rituals, as a way to communicate with deities. The “flesh of the gods” or “ teonanácat,” as the Aztecs called them, is believed to be a type of magic mushroom. Other tribes originating in Central America such as the Nahua, Mazatec, Mixtec, and Zapatec were also involved in mushroom use for similar reasons. 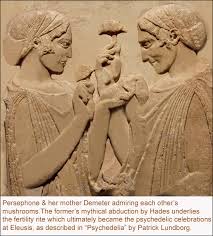