Manipulation of seed “slavery” – Since 2016, the USDA has approved dozens of gene-edited crop varieties, including corn, soybeans, tomatoes, pennycress and camelina. The first gene-edited soybean, developed by Minnesota-based biotech startup Calyxt, entered the US food supply in March 2019.  “There are about 7,000 large and small seed companies across the world….There are seeds coming from many, many different places.  – Adrian Percy, head of research and development for Bayer CropScience 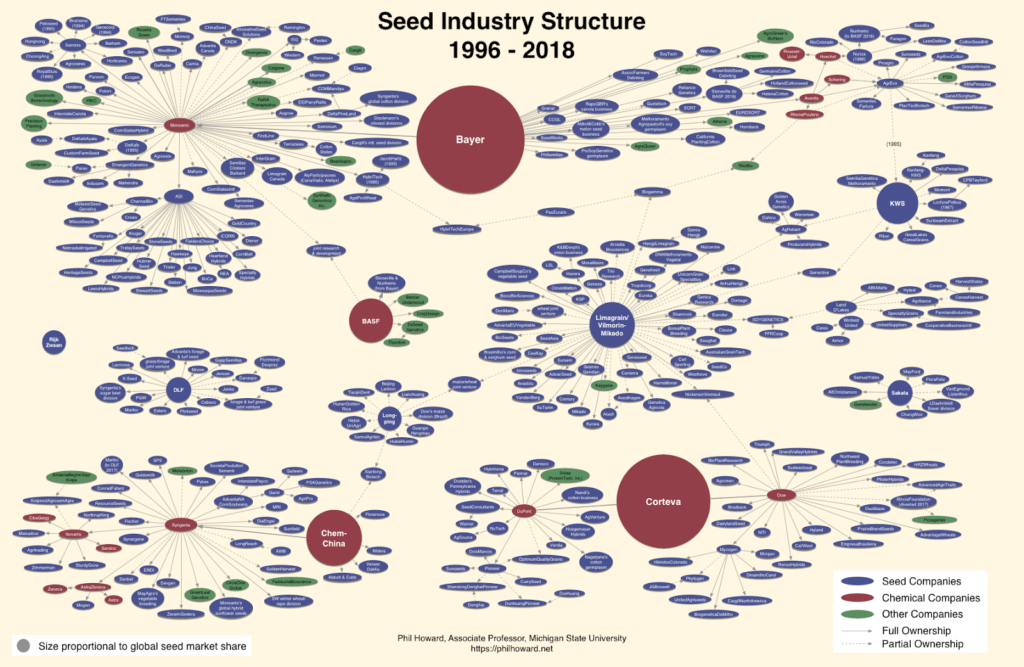 Howard does not provide evidence to back up these claims and it is difficult to verify them because of numerous unknown factors, including proprietary information from these companies, accurate sales data from much smaller competitors and data on the amount of non-commercial seeds used in farming. In 2013, Monsanto, then the world’s largest seed company and now owned by Bayer, pegged its own share of the worldwide seed market at 5 percent, noting that there are many crop areas in which the company has little or no participation. When asked by the Genetic Literacy Project in June 2016 for further clarification, the company replied:

According to anti-GMO activists, “The real purpose of GM foods is to give giant corporations legally-enforceable monopoly powers over the entire global food chain.” Major corporations are alleged to control the production of the overwhelming majority of patented seeds and 75% of the world’s pesticides market.

Although these claims are rampant throughout the Internet and are often cited by the mainstream media, verification is impossible, based on available public data. While the seed industry has undergone major consolidation in the biotech era, there remain several thousand smaller seed producers around the world.

It can be said that large companies dominate the corn and soybean row crop markets (particularly in the United States and South America), based on the popularity of their GMO seed offerings. But when considering global food supply, one must factor in crops such as wheat—still largely developed by public universities—and many other staple crops such as rice, cassava, sorghum, sweet potatoes, potatoes, plantains and yam for which there are not yet any commercial GMO varieties and that receive limited attention from Bayer and its competitors. Increasingly fewer numbers of farmers in the developed world save seeds for future use because they are not as productive as hybrids and GMOs.

While several large biotechnology companies have a dominant presence in key global grain markets, it is a stretch to say they ‘control the world’s food supply.’ Bayer, DowDupont and several others have a major impact on the corn, soybean and cotton markets, particularly in the United States. It’s also true that North American corn and soybean farmers may face more limited choices in terms of the seed companies they can purchase from. But farmers are business people and are not forced to buy patented seeds. They do so because those seeds historically represent the best chance at profitability, through stronger yields and lower input costs.
*

Through those agreements and its own seeds, Monsanto biotech traits can be found in most of the corn and soybeans planted in the US. In a report to the Department of Justice, Dupont wrote:

The ag biotech trait market is firmly in the grip of a single supplier, acting as a bottleneck to competition and choice… it also threatens the global goals for agriculture in the 21st Century doubling the world’s food supply by 2050.

A common complaint by anti-GMO activists is that Monsanto and a handful of other biotech firms have taken control of the world’s food supply by restricting the options available to farmers. Vandana Shiva, philosopher and anti-GMO activist, calls is “seed slavery”:

Seed slavery is ethically important to address because it transforms the Earth family into corporate property. It is ecologically important because with seeds in the hands of five corporations, biodiversity disappears, and is replaced by monocultures of GMOs. … In our times some corporations think it is alright to own life on earth through patents and intellectual property rights (IPR). Patents are granted for inventions, and life is not an invention. These IPR monopolies on seeds are also creating a new bondage and dependency for farmers who are getting trapped in debt to pay royalties. 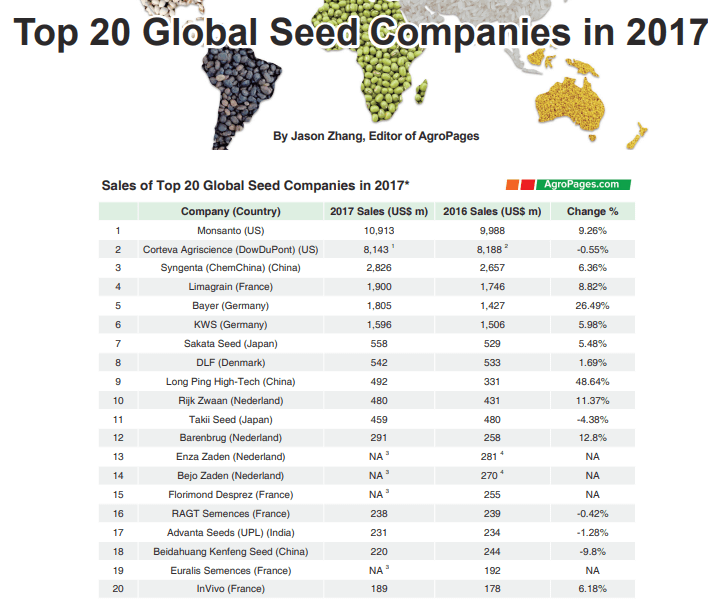