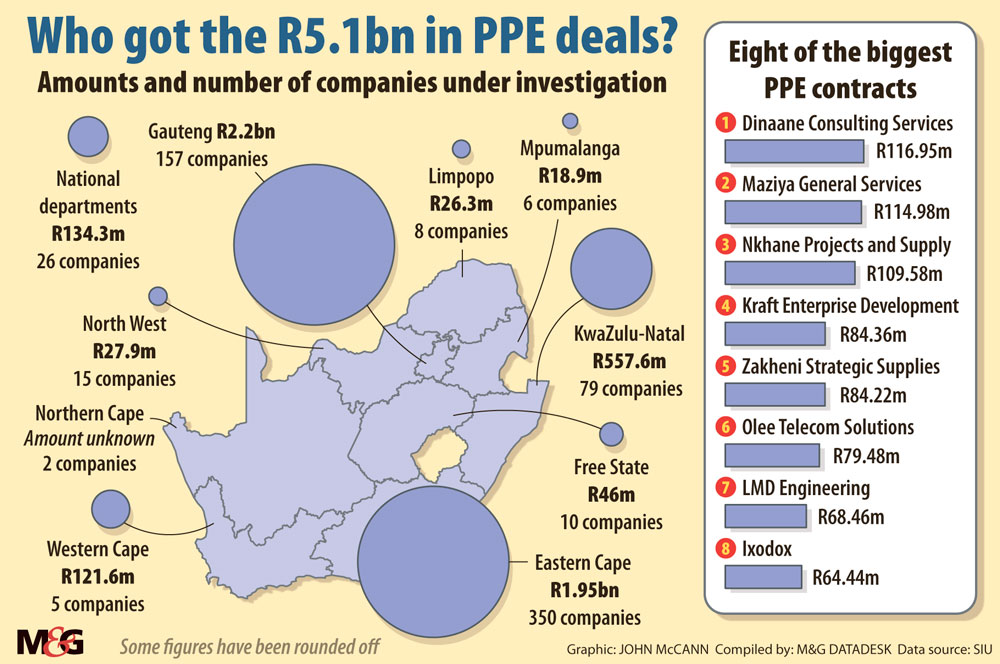 More than 12 000 people have died of Covid-19 in South Africa. Nearly 250 of those were healthcare workers. To protect them and other essential workers who come into contact with people who have the coronavirus, the government has spent R10-billion on procuring personal protective equipment (PPE).

Since then, a network of unqualified, barely qualified and under-capacitated companies have dug into the PPE tender pie. Some of these are allegedly government employees.

The law on who can tender for state work is simple. According to the Public Administration Management Act, a state employee, as defined by the Public Service Act, may not conduct business with the state or be a director of a company doing business with the state. This includes part-time employees, says department of public service and administration spokesperson Kamogelo Mogotsi: “There is no distinction and they [part-time state employees] don’t fall outside the category of ‘employee’.”

Meanwhile, the Special Investigating Unit (SIU) briefed Parliament’s standing committee on public accounts this week, noting that 658 contracts are currently under the microscope. In its presentation, the SIU said in Gauteng alone it was currently investigating, 90 companies used to procure PPE; 30 companies used to procure medical equipment and 32 companies for services related to catering, flights, accommodation, counselling sessions for staff, among other services.

There are currently investigations in all nine provinces, as well as ongoing  probes into national departments, including the departments of labour, education, defence, public works, and correctional services.

The PPE bonanza and how ‘flukes’ made people millions

The South African government is investigating reports of large-scale “looting” of its $26 billion coronavirus rescue package, launched to cushion the economic impact of the pandemic on struggling households.    The government’s Special Investigating Unit is probing more than 600 corruption cases linked to $294 million in coronavirus procurement tenders.

Corruption allegations linked to Covid-19 procurement first emerged a month ago, when newspaper reports tied the husband of Ramaphosa’s spokeswoman to a 125 million rand ($7.6 million) contract to supply the health department of Gauteng province with equipment. South Africa’s specialized crime unit has since started investigating potential impropriety in the awarding of 658 government contracts worth more than 5 billion rand.

According to figures by Johns Hopkins University, South Africa, with a population of about 59 million, (excluding the millions of immigrants and illegals) is ranked fifth in the world in terms of COVID-19 cases. It falls behind the US, Brazil, Russia and India respectively  — all these countries have a  bigger population than South Africa.

Those working on the frontline of fighting the virus face a stiff challenge caused by issues with personal protective equipment (PPE).     Massive corruption surrounding the purchasing and supply of PPE puts the workers at risk when taking care of patients.    The graft involves overpricing, substandard products and services, and giving tenders to those connected to the government and the ruling party.

Anti-corruption groups in South Africa say that in Gauteng alone, some 91 companies who received purchase orders from the Department of Health are under investigation.  Amongst the top officials being investigated is President Cyril Ramaphosa’s spokesperson Khusela Diko. Her husband allegedly scored a $7 million (€5.9 million) tender. The Gauteng provincial minister of health, Bandile Masuku, and his wife have also been put on special leave over COVID-19 related tender corruption allegations.

Nine civil society groups have written to South African authorities demanding action be taken against state officials, private companies and individuals who are siphoning funds meant to deal with COVID-19 in Gauteng province.

“Our country has had to borrow money from the IMF to deal with the crisis. Yet, for the ruthless ‘covidpreneur,’ and those within the state and other institutions who enable corruption, this is simply an opportunity to exploit the situation,” a statement by the organizations read.

The International Monetary Fund (IMF) approved $4.3 billion in emergency support for South Africa to help the nation deal with the COVID-19 pandemic. The organization said the money would assist South Africa in coping with the unfolding deep economic recession resulting from the COVID-19 shock.   Corruption Watch — one of the organizations that petitioned the South African authorities to take an action — said the issue of corruption was “extremely serious.”

“It has been acknowledged as such by the presidency,” Karam Singh, head of legal and investigations, told DW.  “It was not unexpected given the increasing systemic challenges posed by corruption and the heightened corruption risks created by the mobilization of funds to address the pandemic.”

The current corruption scandal is not only in Gauteng. According to Zaakirah Vadi of Ahmed Kathrada Foundation, the vice is rampant at all provincial treasuries, health departments and within municipalities.    The Special Investigative Unit is reportedly investigating alleged irregular contracts in KwaZulu Natal and the Eastern Cape. The Hawks raided the Nkomazi Municipality in Mpumalanga over alleged COVID-19 tender fraud, Vadi told DW.

“There have been reports of food parcel corruption in different provinces over the last few months, a form of corruption that has impacted at a very local level. And this is just what we know of for now, publicly,” Vadi added.

Parliament’s Portfolio Committee on Higher Education, Science and Technology has expressed concerns over the delays in the procurement of the laptops for the National Student Financial Aid Scheme (NSFAS) qualifying students.    Committee chairperson Philly Mapulane says it has been four months since Higher education minister Blade Nzimande announced that government will procure laptops for all NSFAS qualifying students in universities and Technical and Vocational Education and Training (TVET) colleges.   The laptops form part of government’s remote learning strategy to save the 2020 academic year as a result of the country being placed under lockdown.    “Students have since being eagerly awaiting the delivery of these laptops which to date remain undelivered as a result of unnecessary delays in the finalisation of the procurement processes by NSFAS,” said Mapulane.   Mapulane said that allegations have since been brought to the committee that there is “interference” with the procurement processes around these laptops.    It will be followed up with the administrator of NSFAS, Dr Randall Carolisen.

The warning from parliament comes a day after president Cyril Ramaphosa published an open letter to the ruling ANC in which he warned that the party was central to recent Covid-19 corruption claims.   Ramaphosa said that recent reports and findings of corruption related to Covid-19 emergency aid is “an unforgivable betrayal to millions of South Africans”.     Private sector companies and individuals were involved, including civil servants, but it was noted that the problem corruption is deeply rooted within the party and within the government.    The ANC has launched a party-wide investigation into corruption allegations, where all provincial branches and leaders are required to draw up lists of every person accused of, or facing charges of wrongdoing.

Parliament warns of another Covid-19 corruption scandal in South Africa

The National Departments and entities list can be found here.

After the government has come under repeated criticism for corruption in the awarding of tenders dealing with the fight against COVID-19, and investigations have been launched to uncover illicit dealings, the National Treasury has released a detailed list of the companies to whom government has given contracts.

The Treasury said the register will be regularly updated. It can be found here.