The Koch Brothers aren’t the only funders of Cato Institute.   As the back-and-forth between the Koch brothers and the Cato Institute continues, with fellows and political philosophers weighing in, it helps to look at some hard financial facts.  Many individuals and family foundations have also contributed. One could certainly argue that these donors also have a stake in Cato, even if they don’t hold shares.     The map shows not only the Koch connections, but some of the donor foundations and their officers. (An interactive version can be found on the Muckety web site.) 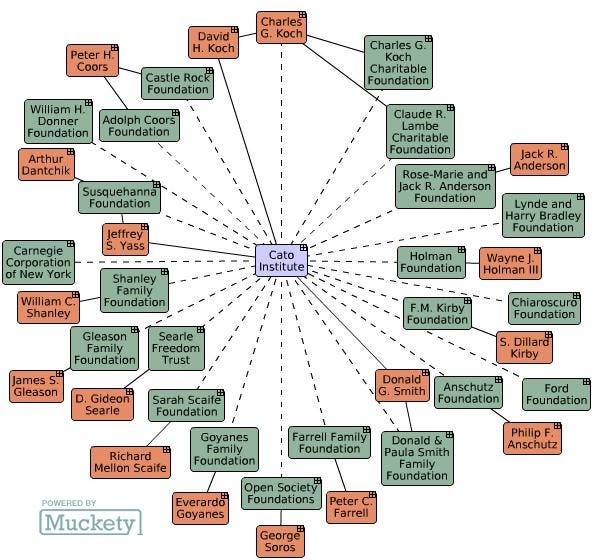 13 March 2012 – Look closely, and you might find a surprise. Liberal financier George Soros is among the backers. His Foundation to Promote Open Society gave $80,000 to Cato in 2010.    Now matter how smart or impassioned the leadership of a think tank, financing is crucial.   Indeed, according a statement released by Levy on Monday, concerns about funding led the institute to reject a proposal by the Kochs for a “standstill agreement” delaying discussion of ownership.

“Several of Cato’s largest donors had announced they would discontinue their donations until it became clear that the Kochs would not control Cato,” Levy said. “A number of Cato benefactors said they would change their wills to eliminate Cato as a beneficiary if Koch dominance was an ongoing threat.”

Although the nugget of the lawsuit against the think tank by Charles and David Koch is the ownership of shares, Cato is not a business.   It’s not traded on a public exchange, and it doesn’t operate for profit, as the privately held Koch Industries does.

It is a nonprofit organization that has received millions of dollars in donations from individuals not named Koch, as well as from foundations and corporations.

After the Kochs filed suit, Cato President Ed Crane issued a statement saying, “While (Charles) Koch and entities controlled by him have supported the Cato Institute financially since that time, Mr. Koch and his affiliates have exercised no significant influence over the direction or management of the Cato Institute, or the work done here.”

The degree of financial support was not spelled out.

A review of recent tax returns filed by Koch foundations shows no donations to Cato.

David Koch, who serves as a trustee, is listed in the institute’s 2010 annual report as a donor of $25,000 or more, but there is no time line given for his contributions.

A spokesperson for Koch Industries tells us:

“Charles Koch and David Koch have contributed tens of millions of dollars to Cato Institute, including more than $13 million since 2000. In addition to their financial support, David Koch has served on the board of directors and executive committee of Cato for a number of years, and Charles Koch served on the international selection committee for Cato’s Milton Friedman Prize for Advancing Liberty as recently as 2010.”

And here’s a response from a Cato spokesperson:

“Charles stopped donating personally around 1991 (I don’t have an exact date.) He did continue to contribute about $250,000 a year through a foundation he controls (The Claude Lambe Foundation), but that ceased in 2010. David contributed varying amounts from the time he became a shareholder and board member in the 1980s, but his contributions ceased in 2010 as well.

“Total contributions from the Kochs over our 35 year existence is about $30 million. During that time, the Cato Institute has raised more than $340 million, so over the life of the Institute, their contributions have amounted to about 10 percent of our funding. It was more in the early years – for the first few years of Cato’s existence, Charles Koch provided 100 percent of the funding. It dropped off to about 4 percent of total funding after 1990, to 0 percent the last two years.”

The most recent annual report (2010) for Cato, published on its web site, reported a yearly budget of $23 million.

He is very active in South Africa as well, that started already 1979 with the Black Sash and later, Codesa and SA Parliament.

A rift between the Cato Institute and two of its leaders, the billionaire brothers Charles and David Koch, ended Monday with an agreement to revamp the research group’s leadership in a way that Cato officials said should maintain its political independence.   As part of the agreement, the Koch brothers will drop two lawsuits they had brought to gain greater control over the institute’s board. In exchange, the Cato Institute said that its longtime chief executive, Ed Crane, who had been at odds with Charles G. Koch, would retire.

Since breaking into the open in March, the feud had captivated many academic and political onlookers in Washington because of the heavyweight names involved: the Cato Institute, widely cited by both Republicans and Democrats for its libertarian research, pitted against the Koch brothers, two of the country’s biggest financiers of conservative politics.

Charles Koch helped found Cato in 1977, and his family has donated more than $30 million to it over the years. But he and Mr. Crane had a bitter falling-out over management and philosophical differences, and the Kochs had been angling for Mr. Crane’s removal for years.   In March, the Kochs, who held two of the four founding “shareholder” seats on Cato’s board, brought their lawsuits to gain control of the seat of another shareholder who died.  Cato’s other leaders said the Kochs’ gambit, if successful, would make it their “mouthpiece” and give the brothers control of the group’s scholarship to advance a conservative political agenda.

Through groups like Americans for Prosperity, the Kochs have fought many of President Obama’s key policies, including business regulation and health care reform. But some of Cato’s libertarian positions supporting liberal causes like same-sex marriage and drug decriminalization have angered conservatives.

Under the agreement, Cato’s unusual shareholder structure is to be dissolved, and it will be led instead by 12 directors, including David H. Koch and three others named by the Kochs.

“For a majority of Cato’s directors,” a joint statement by Cato and the Kochs said, “the agreement confirms Cato’s independence and ensures that Cato is not viewed as controlled by the Kochs.” It continued, “For Charles Koch and David Koch, the agreement helps ensure that Cato will be a principled organization that is effective in advancing a free society.”

Mr. Crane is to be replaced as Cato’s chief executive within six months by John Allison, an Ayn Rand admirer who led BB&T, a bank based in North Carolina.   Charles Koch predicted that Mr. Allison would take Cato to “new levels of effectiveness” in fighting what he called “the alarming increase in the size and scope of government.”   After 35 years at Cato’s helm, Mr. Crane said in a telephone interview that he held “no bitterness” over his ouster.   “It was probably time for me to go anyway,” he said. “I think both sides got what they wanted. I’m happy. This was the tradeoff: Cato’s independence for new leadership.”

Who is the Quicy Institute?   Names of Soros and Koch…