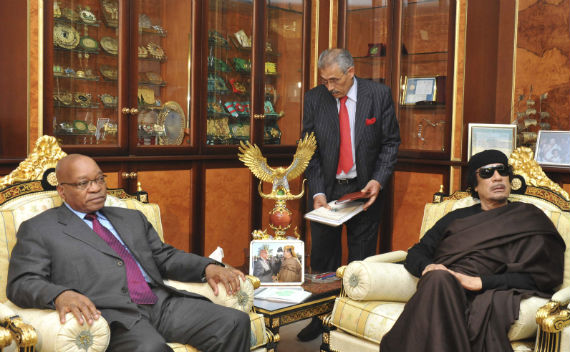 Resolution 1973 (2011)
Protection of civilians
No Fly Zone
Ban on flights
Asset freeze
Adopted by the Security Council at its 6498th meeting, on 17 March 2011

While he was president, Zuma, spoke at a high-level Africa Union panel on Libya in Pretoria during 2011, warned NATO against the “political assassination” of Muammar Qaddafi. Following the line of other African heads of state, Zuma said that UN Security Council Resolution (UNSCR) 1973 authorized military action only for the protection of the Libyan people and to facilitate humanitarian relief — not regime change. Zuma also called for a negotiated compromise between Qaddafi and the rebel Transitional National Council.

It was mentioned that the African National Congress (ANC), was a liberation movement during the days of apartheid and received funding and political support from Qaddafi. Further, many of Zuma’s ANC constituents will not be happy at the spectacle of NATO bombs apparently intended to bring about regime change.

The Libyan crisis has gone on longer than most observers expected when South Africa voted on March 17 for UNSCR 1973. Zuma must walk a fine line as he seeks the leadership of the African Union, preserves his liberation credentials — and yet also looks over his shoulder at the Democratic Alliance (DA), which did better than many expected among black voters in April’s local government elections, despite its image as a predominately white and middle class party.

“The way to make money,” predatory oilman John D Rockefeller once said, “is to buy when blood is running in the streets.” An easier way is when another predatory oilman — say, a Libyan dictator — gives it to you, as the late Muammar Gaddafi allegedly did to former president Jacob Zuma when real blood was running in Gaddafi’s streets.

The money, $30m in cash, was apparently a rainy-day fund to pay for Gaddafi’s expected legal troubles; or perhaps to buy a plot in Nkandla, a fresh start, maybe, away from a country on fire?

At the meeting on Wednesday, June 15, 2011 in Pretoria, Zuma has spoken out against what he termed the “misuse of the good intentions in Resolution 1973”, which was put in place as a means of dealing with the Libyan conflict.

Addressing Parliament on the Tuesday, Zuma said the events in Libya have “re-emphasised the urgency for the full operationalisation, without delay, of the African Peace and Security Architecture, and also the reform of the UN Security Council.”

He pointed out that the North Atlantic Treaty Organisation (NATO), which is at the helm of bombings in Libya, was pursuing regime change and political assassinations in Libya, instead of sticking to a UN resolution to protect civilians.

He said the United Nations Resolution 1973, which was only meant to enforce a no-fly zone and protect civilians in the civil war, was being abused for regime change, political assassinations and foreign military occupation.

He was of the opinion that these actions undermined the efforts of the African Union in finding solutions to the problems facing its member states. It also flies in the face of all efforts to promote the sanctity of international law,” he said, urging all parties to respect human rights and comply with international humanitarian law.

NATO leaders have repeatedly called for Muammar Gaddafi to go and air strikes have reportedly killed one of his sons, although western leaders have ruled out the possibility of a land invasion or occupation.

Zuma has visited Libya twice since March on behalf of the African Union (AU), seeking a solution to the civil war.   On his last visit, he delivered the AU plan which the embattled government of Libya accepted, while the rebels have rejected the plan.

At the 5 July 2011 meeting, NATO Secretary General Anders Fogh Rasmussen  spoke during a break from a meeting of the NATO-Russia Council in the Black Sea resort of Sochi, where Russian President Dmitry Medvedev also met South African President Jacob Zuma to discuss the situation of Libya.

Russia abstained from the U.N. Security Council resolution in March that authorised military intervention to protect civilians. It has criticised the NATO operation, but also joined Western nations in calling for Gaddafi to give up power.
It was stated by Medvedev they looked at Libya’s future practically identically, and everyone would like Libya to be a modern state, naturally, and a sovereign and democratic state.

Asked about the rebel declaration that Gaddafi is welcome to remain in Libya under international supervision if he gives up all power, Rasmussen made no direct statement about NATO’s position on the offer.