Ukraine is located in Eastern Europe. It is the second-largest country on the continent after Russia. Its capital is Kyiv. It shares a border with Russia. It used to be part of the Soviet Union but when did it gain independence? 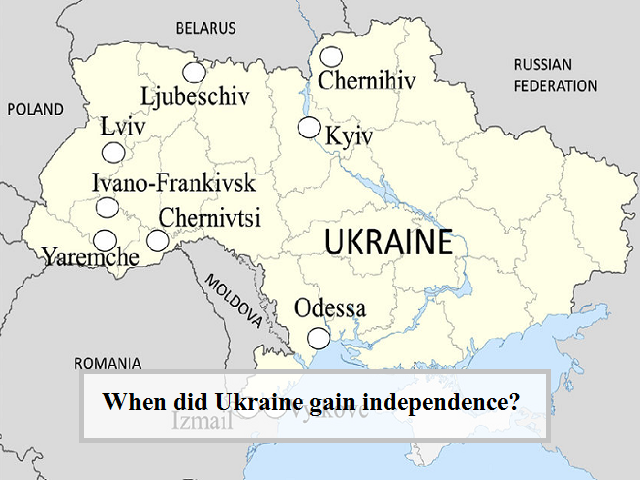 When did Ukraine gain independence?

Ukraine as a fully independent country emerged only late in the 20th century, after long periods of successive domination by Poland-Lithuania, Russia, and the Union of Soviet Socialist Republics (U.S.S.R).

Ukraine became an independent state with the collapse of the Soviet Union in 1991 which was formalized with a referendum in December 1991. On 24 August 1991, officially Ukraine declared itself an independent country. It was when the communist Supreme Soviet (Parliament) of Ukraine proclaimed that Ukraine would no longer follow the laws of the U.S.S.R. The only laws of the Ukrainian SSR, de facto declared Ukraine independence from the Soviet Union.

Voters approved a referendum formalizing independence from the Soviet Union on 1 December. Over 90% of the Ukrainian citizens voted for independence with majorities in every region which also included around 56% in Crimea.

In an election coinciding with the referendum, Kravchuk was chosen as president. Till this time, various important developments had taken place in Ukraine like the dissolution of the Communist Party, and the development of the infrastructure for separate Ukrainian armed forces.

There was political pressure on Ukraine from Moscow to reconsider its course toward independence and enter into a restructured Soviet Union. After a week after the independence referendum, leaders of Ukraine, Russia, and Belarus agreed to found the Commonwealth of Independent States (CIS). Thereafter, the U.S.S.R. was formally disbanded.

In 1918-20, Ukraine had experienced a brief period of independence but portions of western Ukraine were ruled by Poland, Romania, and Czechoslovakia in the period between the two World Wars. Thereafter, Ukraine became a part of the Soviet Union as the Ukrainian Soviet Socialist Republic (S.S.R). In 1990-91, the Soviet Union began to unravel and the legislature of the Ukrainian S.S. R declared sovereignty.

[Ukraine] had a vote on sovereignty in March 1991, which was fairly overwhelmingly voted in favor of. This wasn’t independence, it was still under sovereignty… in the Soviet Union, but because the vote was so overwhelming, you had a sense that they weren’t going to stop there.

“With Ukraine, Russia is an empire. Without it, Russia is just another country.” The history between these two is long and often fraught with conflict. Before the current protests in Ukraine over relations with Russia, Ukraine had to fight to free itself from the Soviet Union. Official independence was declared August 24, 1991 and with it came its own host of problems

As per reports, Russian President Vladimir Putin has ordered an invasion of Ukraine, its southern neighbour. There is a large-scale military attack on Ukraine and Russian convoys entering from all directions. On 24 February 2022, Vladimir announced the action during a televised address and said that the move was a response to threats from Ukraine.

Vladimir Putin announced a “military operation” in Ukraine’s eastern Donbas region. He further stated that Russia did not want to occupy Ukraine but would demilitarise and “de-Nazify” the country.

Ukraine is the eighth-most populous country in Europe and has long been a target of territorial invasion, mainly by Russia as a neighbouring country and a former Soviet state. Let us take a look back at when Ukraine gained independence and when the country was established.