According to information sources, there were discussions and agreements during 1990’s regarding the issue of enlargement of Nato closer to Russia, but it was “informal” and is quoted below.  Was it really only informal?    So it is not a matter of who is or was right and who is in the wrong. Who acts within their powers when they feel threatened? In the beginning, the NATO organisation was smaller than it is now with less members. The question is, who or what of the NATO countries is expanding their powers or military basis so much in Europe or elsewhere to gain foothold around, for example against Russia? 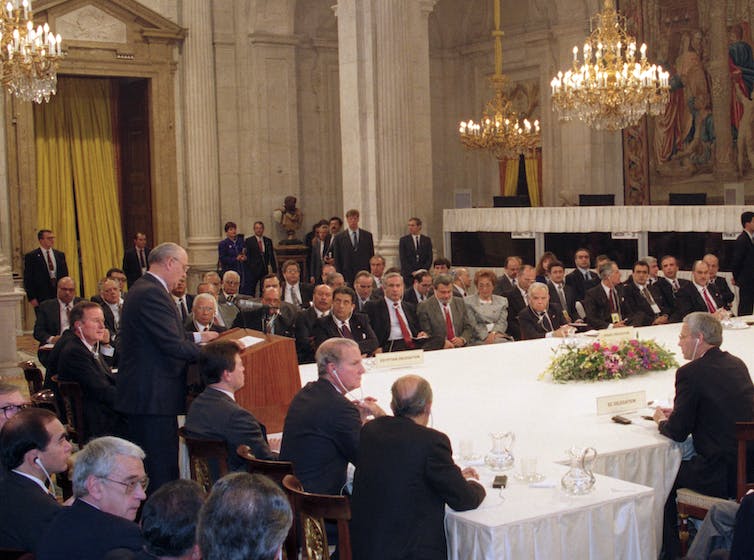 Document No. 119: Record of Conversation between Mikhail Gorbachev and James Baker, February 9, 1990

Baker again assures Gorbachev that “neither the President nor I intend to extract any unilateral advantages from the processes taking place,” and that the Americans understand the importance for the USSR and Europe of guarantees that “not an inch of NATO’s present military jurisdiction will spread in an eastern direction.” Gorbachev responds by quoting Polish President (and former dictator) Jaruzelski: “that the presence of American and Soviet troops in Europe is an element of stability.” 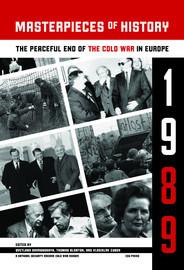 The key exchange takes place when Baker asks whether Gorbachev would prefer “a united Germany outside of NATO, absolutely independent and without American troops; or a united Germany keeping its connections with NATO, but with the guarantee that NATO’s jurisprudence or troops will not spread east of the present boundary.” Instead of taking the guarantee, the Soviet leader says only that “[w]e will think everything over. We intend to discuss all these questions in depth at the leadership level. It goes without saying that a broadening of the NATO zone is not acceptable.” Baker responds, “We agree with that.” Somehow for Gorbachev this is sufficient reassurance, and he never asks for a pledge in writing.

And the last point. NATO is the mechanism for securing the U.S. presence in Europe. If NATO is liquidated, there will be no such mechanism in Europe. We understand that not only for the Soviet Union but for other European countries as well it is important to have guarantees that if the United States keeps its presence in Germany within the framework of NATO, not an inch of  NATO’s present military jurisdiction will spread in an eastern direction.

We believe that consultations and discussions within the framework of the “two + four” mechanism should guarantee that Germany’s unification will not lead to NATO’s military organization spreading to the east.

READ ALSO:
More than thirty years have gone by since U.S. Secretary of State James Baker assured Soviet leader Mikhail Gorbachev in February 1990 that if Germany remained part of the North Atlantic Treaty Organization after reunification  and if the United States “maintained a presence” in that country, “there would be no extension” of NATO’s jurisdiction “one inch to the east.” …..

While both the Soviet Union and the United States expressed an understanding of the consequences of leaving Germany to unilaterally reestablish its own security, Baker’s statement was remarkable.

Perhaps even more remarkable, though, was the Soviet Union’s willingness to accept this condition knowing that it would likely alter the global balance of power, at least in the short term.  Thirty years later, Germany remains a successful example of reunification as a democratic state reintegrated into the international system.  A key exception from what was envisioned in that February meeting, however, is that in the same thirty-year period NATO grew from sixteen to thirty member states – it expanded significantly further than Baker’s “one inch” east promise.

Whether NATO should expand to include countries once under Soviet influence — including Ukraine — is a question that has dogged U.S. and Russian officials for 30 years.

There’s a grievance at the heart of the standoff between NATO countries and Russia over Ukraine. Russians say the U.S. and its NATO allies broke a key pledge. They claim the West promised Russia in the 1990s that NATO would move not one inch to the east. Putin recently said, you cheated us shamelessly. The U.S. and NATO say that’s nonsense and they’ve always had an open-door membership policy.

In his annual end-of-year press conference in Moscow in December, Putin accused NATO of deceiving Russia by giving assurances in the 1990s that it would not expand “an inch to the East” — promises made to Soviet leader Mikhail Gorbachev during negotiations between the West and the Soviet Union over German unification, the Russian leader said.

“They cheated us — vehemently, blatantly. NATO is expanding,” Putin said. He cited former U.S. Secretary of State James Baker as Exhibit One in his indictment and quoted a remark Baker made to Gorbachev in 1990, saying, “NATO will not move one inch further east.”

In a speech at the Munich Security Conference in 2007, he asked, “What happened to the assurances our Western partners made after the dissolution of the Warsaw Pact?”

Gorbachev explained that the Baker remark was being taken out of context and replied: “The topic of ‘NATO expansion’ was not discussed at all.” But another issue was discussed: “Making sure that NATO’s military structures would not advance and that additional armed forces would not be deployed on the territory of the then-GDR [German Democratic Republic] after German reunification. Baker’s statement was made in that context.”

Although there was no formal agreement between NATO and Russia, Putin is referring to informal conversations that are publicly available today, said John Lough, an analyst at the London-based think tank Chatham House and NATO’s first representative in Moscow, who worked there in the mid-1990s.

According to him, the then US Secretary of State James Baker did mention in a conversation with Soviet leader Mikhail Gorbachev that NATO’s military jurisdiction was not expected to extend beyond Germany’s eastern border.

“Let us remember that in 1990, the Soviet Union and the Warsaw Pact were still in existence. So the idea that NATO would enlarge was certainly ambitious,” he told LRT.lt

“No international treaty is valid forever and, in this case, there wasn’t even a treaty. To say that any verbal references or attempts at reassurance should be valid now is simply naive,” he said.

NATO has never promised Russia not to expand eastwards. The supposed existence of such an agreement is based on informal conversations. In 1990, the US Secretary of State mentioned in a conversation with Gorbachev that NATO’s military jurisdiction would not be extended beyond Germany’s eastern border. Experts stress that this does not indicate that an agreement was reached, while the subject was never discussed afterwards. Moreover, this conversation, devoted exclusively to the unification of Germany, was between the US and the Soviet Union representatives, not those of NATO and Russia.

The decision to accept former members of the Warsaw Pact, the defensive alliance which included the USSR and several eastern European countries, is being subject to a revisionist history. This is perpetuating a myth that Nato promised not to expand eastwards after the Soviet Union dissolved.

The main issue highlighted by the crisis on the Ukraine borders over the past few months has predominantly focused on the role of Nato and the friction over the eastward expansion of the alliance. This has been a constant message emerging from the Kremlin: that the Nato membership of many parts of the old Soviet Bloc, and the prospective membership of Ukraine to the alliance, poses a threat to Russian sovereignty.

Indeed, the only formal agreement signed between Nato countries and the USSR, before its breakup in December 1991, was the Treaty of Final Settlement with Respect to Germany. The promises made specifically relate to Germany, and the territory of the former GDR, which were on the deployment of non-German Nato forces into eastern Germany and the deployment of nuclear weapons – and these promises have been kept.

In 2014, the former Soviet leader Mikhail Gorbachev marked the 25th anniversary of the fall of the Berlin wall by noting in an interview that that Nato’s enlargement “was not discussed at all” at the time:

Not a single Eastern European country raised the issue, not even after the Warsaw Pact ceased to exist in 1991. Western leaders didn’t bring it up, either.

There was, he said, no promise not to enlarge the alliance, though in the same interview Gorbachev also stated that he thinks that enlargement was a “big mistake” and “a violation of the spirit of the statements and assurances made” in 1990.

But many former Warsaw Pact countries wanted a greater level of assurance of their security after the collapse of the Soviet Union, especially Poland, Hungary and Czechoslovakia. These countries duly signed the Visegrad Declaration in February 1991, with the objective of “full involvement in the European … system of security”.

The relative security of the eastern European states was challenged during the 1990s due to the attempted October coup in Moscow in 1993, the first Chechen war in 1994 and Russian assistance to the breakaway Republic of Abkhazia in the south Caucasus. The combination of these events increased the perception of vulnerability, particularly in the Baltic states, indicating that Moscow was prepared to act militarily to pursue its security objectives.

Alongside the increasing security concerns of former Warsaw Pact countries, there was significant debate in the early 1990s about the merits of enlargement. Rather than jump straight into enlarging Nato, the Partnership For Peace (PfP) was established in 1994 and included NACC members as well as former Soviet Asian countries, such as Kyrgyzstan and Kazakhstan. The result was a greater formalisation of the security arrangements, initially developed by the NACC, into a structure that allowed for PfP members to engage in Nato peacekeeping operations in the former Yugoslavia.

Russia was a participant in these new security arrangements, and was keen to clarify that Nato enlargement was not a security threat to Russia. The then president of Russia, Boris Yeltsin, wrote in a September 1993 letter to the then US president, Bill Clinton: “Any possible integration of east European countries into Nato will not automatically lead to the alliance somehow turning against Russia.” So it was being clearly signalled that Russia did not object to the direction Europe’s new security architecture was following.

The three Visegrad countries were duly invited to join Nato at the 1997 Madrid Summit, joining in 1999. Slovakia was forced to wait until 2004. The move was widely supported by the people of the countries which joined. Hungarians voted 85.3% in favour of Nato membership in a referendum, for example.

The bedrock of the Nato-Russia relationship, the Nato-Russia Founding Act, was also signed at the 1997 Madrid Summit alongside the enlargement invitations. As the second formal agreement of the post-Cold War era between Russia and Nato, the act confirms that “Nato and Russia do not consider each other as adversaries”, and that Nato transformation is “a process that will continue”. It is, therefore, clear that Nato enlargement, was not considered a primary security concern for Russia.

The Baltic States openly pursued Nato membership, following the signing of the Baltic Charter of Partnership with the US in 1998. Rather than oppose Baltic membership, Russia actually helped it to happen by resolving border disputes with Lithuania.