Ivermectin has been used all over in African countries.  Nobody has to be a scientist to compare the maps of countries of Africa where Ivermectin was used versus the Corona virus 19 today.   It is obvious and not a co-incidence.   Credit to the master in Japan, Prof.
(Photo) Red areas represent areas receiving ivermectin treatment. Yellow areas represent areas requiring further epidemiological surveys. The green area is the area covered by the Onchocerciasis Control Programme in West Africa. Pink zones indicate the special intervention zones, i.e., previous OCP areas receiving ivermectin and some vector control. 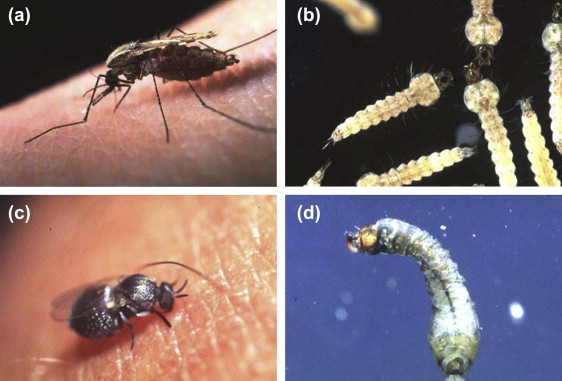 What is RIVER blindness?

This video explains the cause, symptoms and means of transmission of onchocerciasis, how it can be treated and how its elimination is now in sight.


IT WAS DONATED TO CONTROL DISEASES

Registered for human use in 1987, ivermectin was immediately donated as Mectizan tablets to be used solely to control Onchocerciasis, a skin disfiguring and blinding disease caused by infection with the filarial worm Onchocerca volvulus, which afflicted millions of poor families throughout the tropics.

WHO recommends treating onchocerciasis with ivermectin at least once yearly for between 10 to 15 years. Where O. volvulus co-exists with Loa loa, treatment strategies have to be adjusted. Loa loa is a parasitic filarial worm that is endemic in Cameroon, the Central African Republic, Congo, the Democratic Republic of the Congo, Nigeria and South Sudan. Treatment of individuals with high levels of L. loa in the blood can sometimes result in severe adverse events. In affected countries, it is recommended to follow the Mectizan Expert Committee (MEC)/APOC recommendations for the management of severe adverse events. 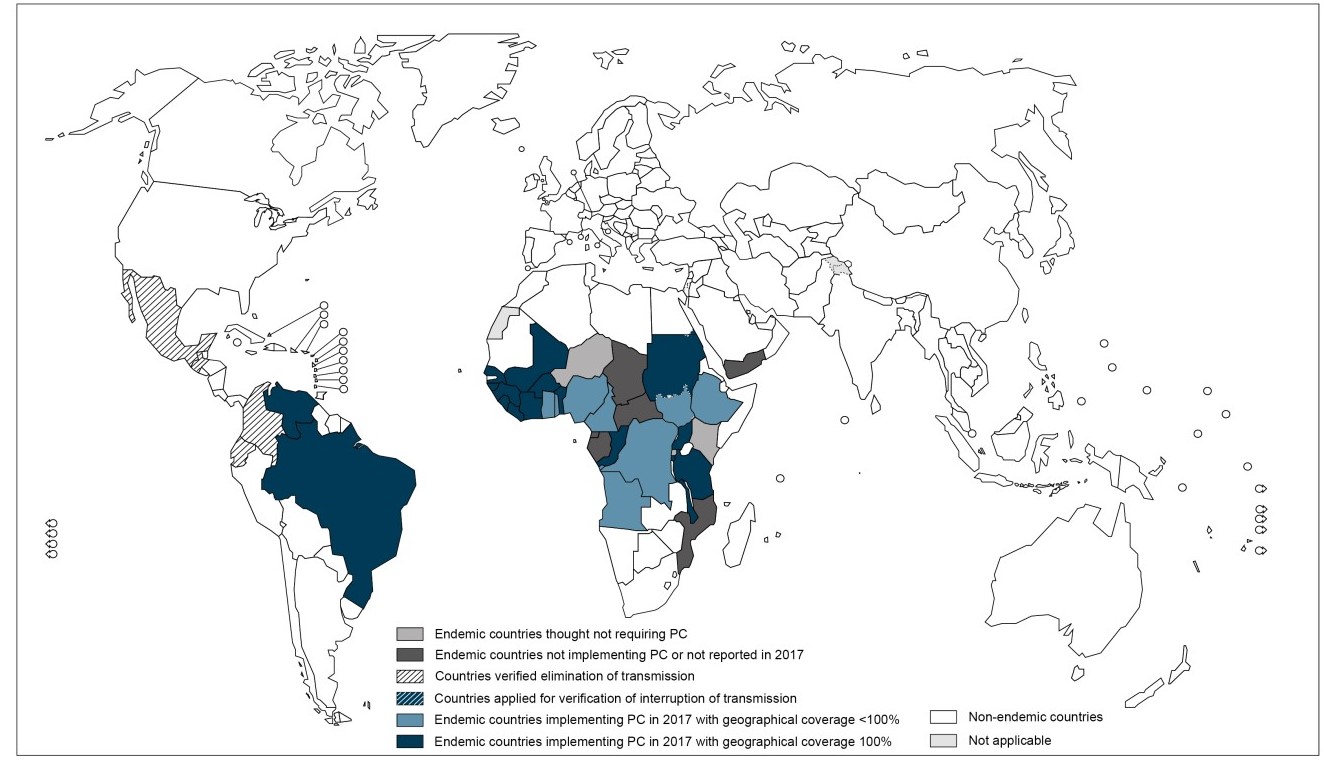 There is no vaccine or medication to prevent infection with O. volvulus.

Between 1974 and 2002, disease caused by onchocerciasis was brought under control in West Africa through the work of the Onchocerciasis Control Programme (OCP), using mainly the spraying of insecticides against blackfly larvae (vector control) by helicopters and airplanes. This has been supplemented by large-scale distribution of ivermectin since 1989.

The OCP relieved 40 million people from infection, prevented blindness in 600 000 people, and ensured that 18 million children were born free from the threat of the disease and blindness. In addition, 25 million hectares of abandoned arable land were reclaimed for settlement and agricultural production, capable of feeding 17 million people annually.

The African Programme for Onchocerciasis Control (APOC) was launched in 1995 with the objective of controlling onchocerciasis in the remaining endemic countries in Africa and closed at the end of 2015 after beginning the transition to onchocerciasis elimination. Its main strategy has been the establishment of sustainable community-directed treatment with ivermectin (CDTI) and vector control with environmentally-safe methods where appropriate. In APOC’s final year, more than 119 million people were treated with ivermectin, and many countries had greatly decreased the morbidity associated with onchocerciasis. More than 800,000 people in Uganda and 120,000 people in Sudan no longer required ivermectin by the time that APOC closed.

In 2017, more than 145 million people were treated in Africa where the strategy of CDTI was implemented, representing more than 70% coverage of the number of people who require treatment globally. The Expanded Special Project for the Elimination of Neglected Tropical Diseases in Africa (ESPEN), set up to cover the five preventive chemotherapy NTDs,  has 4 core objectives: 1. Scale up treatments towards the achievement of 100% geographic coverage, 2. Scale down: stopping treatments once transmission has been interrupted or control achieved, 3. Strengthen information systems for evidence-based action, and 4. Improve the effective use of donated medicines through enhance supply chain management.  ESPEN is housed in the WHO Regional Office for Africa.

The Onchocerciasis Elimination Program of the Americas (OEPA) began in 1992 with the objective of eliminating ocular morbidity and interruption of transmission throughout the Americas by 2015 through biannual large-scale treatment with ivermectin. All 13 foci in this region achieved coverage of more than 85% in 2006, and transmission was interrupted in 11 of the 13 foci so far in 2017. Elimination efforts are now focused on the Yanomami people living in Brazil and Venezuela (Bolivarian Republic of).

On 5 April 2013, the Director-General of WHO issued an official letter confirming that Colombia has achieved elimination of onchocerciasis. Colombia was the first country in the world to be verified and declared free of onchocerciasis by WHO. This has been followed by Ecuador in September 2014, Mexico in July 2015, and Guatemala in July 2016. More than 500 000 people no longer need ivermectin in the Americas.

There is another study done of the Ivermectin in Africa, specific regarding Covid 19 virus and the citizens of certain countries that used Ivermectin.

The low frequency of cases and deaths from the SARS-CoV-2 COVID-19 virus in some countries of Africa has called our attention to the unusual behavior of this disease. Data from 19 countries that participated in the WHO sponsored African Programme for Onchocerciasis Control (APOC), from 1995 until 2015, intended to treat over 90 million people annually and protect an at-risk population of 115 million, were compared with thirty-five (Non-APOC), countries that were not included. The statistics show a significant 28% lower mortality (0.72 IC 95% 0,67-0,78) and 8% lower rate of infection (0.92 IC95% 0,91-0,93) due to COVID-19.  It was concluded that the incidence in mortality rates and number of cases is significantly lower among the APOC countries compared to non-APOC countries. Additional studies are needed to confirm it.


Ivermectin has been banned in South Africa to used for Covid19 – there is no vaccine and those “promised vaccines” all over, are also not of any guarantee to anybody. For how long is those vaccines, for a year perhaps? And people still need to wear masks and closed down businesses to harm all economies. No income, no food and no employment. Mass control and manipulation.

What are the benefits of Ivermectin? There were already various trials in different countries.

Learn about Tanzania and Madagascar


Regarding the Covid-19 virus, it was earlier stated on 2 November 2020, that when Covid-19 arrived in Tanzania, their President Magufuli didn’t believe in his people to stay at home. He wanted his people to get into the churches and mosques to pray.


Speaking during a political rally in Chato Geita, Magufuli said his government did not bow to pressure to lockdowns.    He stated that many threatened us with dire consequences, they wanted us to shut down the economy so that we run away from the problem but in reality, leadership is about carrying the problems on those you lead on your shoulders that is why today we are here.   He is not the only country that decided not to close down the businesses and economy.

New Approval Of Ivermectin For COVID-19: Review Of How It May Work And Research To Date [9 Studies]

Belize, a Central American country, has just recently approved the use of Ivermectin for the treatment of COVID-19. Their health ministry reviewed the evidence to date and felt that the current benefits of Ivermectin justified it’s formal integration into their treatment protocols for COVID-19. They acknowledge that many of the studies have shortcomings, but fall back on the overarching positive results of these studies mixed with the safety profile and history of widespread use of Ivermectin as an anti-parasitic. Beyond this, they state that by placing it into their formal treatment protocols, it gives the control back to healthcare providers to ensure that the medication is being taken in the correct manner at appropriate doses using formulations intended for humans and that people with contraindications to the medication will be able to talk about these with their healthcare provider. After that, we will touch on 4 theorized mechanisms by which Ivermectin may be efficacious including Imp alpha/beta, RNA dependent RNA polymerase inhibition, CD147R inhibition, and modulation of the STAT3 pathway. Check out the video to understand all these things and more!

VARIOUS OTHER VIDEO LINKS ON IVERMECTIN

A combination of vector control in West Africa, the use of ivermectin, large-scale Community Directed Treatment (ComDT) and the use of ONCHOSIM [2] (a microsimulation model for onchocerciasis transmission) has allowed the continuous annual treatment of more than 30 million people.

Onchocerciasis is found in 28 countries in Africa — in the savannah as well as in the forest zone — from Senegal to Malawi, 6 countries in Latin America and in the Yemen. At present, the World Health Organization estimates that there are more than 17.7 million people infected with onchocerciasis — approximately 500,000 with visual impairments, 270,000 of whom are blind [1,2]. 99% of the cases are, however, found in Africa.