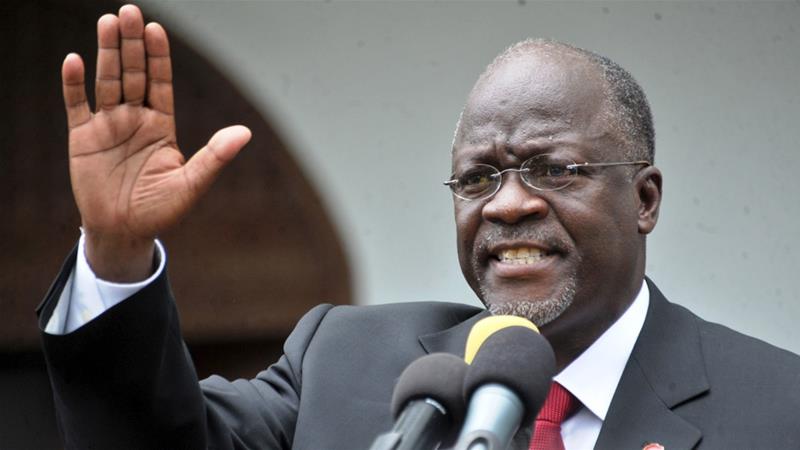 So far, four people have died from the coronavirus in Tanzania, where social gatherings have been suspended and schools closed, but places of worship remain open and people still move about without restrictions.

At a time when countries have imposed and are easing lockdowns in the fight against COVID-19, Tanzanian president John Magufuli insists there will be no such thing as lockdown in the east African nation. During an address to a church congregation over the weekend, Magufuli stressed that when the neighbours are done with their lockdowns, they could still come for help with food. “There is not going to be any such thing as lockdown in Tanzania, God will help us. We need to work hard, once the o…

“We have had a number of viral diseases, including Aids and measles. Our economy must come first. It must not sleep. If we allow our economy to sleep, we will not receive salaries,” President John Magufuli said during a Sunday mass in his hometown Chato, according to local daily The Citizen.

He also said Tanzania has decided to leave its borders open.

“We share borders with about eight countries and if we close borders, we will be destroying their economies,” Magufuli added.

He said the country’s economy is on the right path and will lift quarantine requirements for tourists in order to boost the economy.

Magufuli has been criticized for not implementing strict measures to curb the spread of the virus. Unlike neighboring countries, Tanzania has not closed places of worship, with some saying prayers would “defeat the virus.”

“My own son after contracting the virus closed himself in his room, took lemon and ginger solution before getting well and is now doing some exercise,” he said in a viral video posted on Sunday, according to The Standard, a Kenyan daily.

Last week, the US Embassy in Tanzania warned that the risk of contracting coronavirus in Dar es Salaam, a major city and commercial port on Tanzania’s Indian Ocean coast and other regions is extremely high because it has not released COVID-19 data in several weeks.

Tanzania has confirmed 509 COVID-19 cases, with 21 deaths and 183 recoveries, according to data from the US’ John Hopkins University.

Tanzanian president John Magufuli insists there will be no lockdown in Tanzania, following the outbreak of the coronavirus. Magufuli has instead told Tanzanian nationals to go about their work, while observing the guidelines in place to stop the spread of the virus. He says he will consider the resumption of the Tanzanian football league in the near future. He was speaking at the swearing-in of the new justice minister.

Tanzania’s President John Magufuli has dismissed imported coronavirus testing kits as faulty, saying they returned positive results on samples taken from a goat and a pawpaw.   Magufuli made the remarks during an event in Chato in northwestern Tanzania on Sunday. He said there were “technical errors” with the tests.

The president, whose government has already drawn criticism for being secretive about the corona virus outbreak and has previously asked Tanzanians to pray the coronavirus away, said he had instructed Tanzanian security forces to check the quality of the kits.   They had randomly obtained several non-human samples, including from a pawpaw, a goat and a sheep, but had assigned them human names and ages.

These samples were then submitted to Tanzania’s laboratory to test for the coronavirus, with the lab technicians left deliberately unaware of their origins.   Samples from the pawpaw and the goat tested positive for COVID-19, the president said, adding this meant it was likely that some people were being tested positive when, in fact, they were not infected by the coronavirus.

“There is something happening. I said before we should not accept that every aid is meant to be good for this nation,” Magufuli said, adding the kits should be investigated.

On Saturday, Magufuli announced that he had placed an order for a herbal treatment for the coronavirus touted by the president of Madagascar.     “I have already written to Madagascar’s president and we will soon dispatch a plane to fetch the medicine so that Tanzania can also benefit from it,” he said.   The herbal remedy, called “Covid Organics” and prepared by the Malagasy Institute for Applied Research, is made out of Artemisia, a plant cultivated on the Indian Ocean island of Madagascar.     Despite a lack of scientific evidence, President Andry Rajoelina of Madagascar claimed that the remedy has already cured some Madagascans of COVID-19. Children returning to school have been required to take it.

President of Tanzania – “There Is A Dirty Game Played In These Tests!”

Magufuli caused alarm by branding lab tests a ‘dirty game’ and hailing natural remedies. Now he is calling for country to open up.

Tanzania’s divisive president John Magufuli has said the economy is “more important than the threat posed by coronavirus”, adding that he wants to reopen the country for tourism despite warnings that Africa could face the next wave of the disease.

The comments by Magufuli, who has modelled his populist response on that of Donald Trump and Brazil’s Jair Bolsonaro – in repeatedly denying the risk of the pandemic to his country – come amid mounting alarm among Tanzania’s neighbours over his approach.

So far there have been 21 officially recorded deaths in Tanzania.

Magufuli made the remarks on Sunday during a mass in his hometown of Chato, where he said he intended to keep Tanzania’s borders open with its eight neighbours. The remarks follow a series of statements in recent weeks minimising the threat of coronavirus.

In a video the Tanzanian president once again touted natural remedies for coronavirus, saying these had helped his son.

“My own son, after contracting the virus, closed himself in his room, took a lemon and ginger solution before getting well and is even able to do push-ups,” he said in a video that went viral.

“We have had a number of viral diseases, including Aids and measles. Our economy must come first. It must not sleep. If we allow our economy to sleep, we will not receive salaries … Life must go on,” he added.

“As I am talking here,” he continued, “some airline operators are fully booked – until August – with tourists who want to visit Tanzania.”  The president’s latest comments follow several bizarre interventions – including his order that animals and fruit be tested for the virus as a demonstration of “false positives”. He has also been accused by health professionals of covering up the true number of infections.

Elected in 2015, and nicknamed the “Bulldozer”, he has become Tanzania’s most high profile leader since Julius Nyerere both for his popularity and also for his reputation of targeting those critical of him.

Even as the US embassy has warned of the risk of “exponential growth” of Covid-19 cases in the country, adding that hospitals were “overwhelmed”, Magufuli has accused international health officials of exaggerating the crisis and suggested some health workers “may have been put on the payroll of imperialists”.

While Tanzania has introduced some of the same social distancing measures as its neighbours, Magufuli’s own preferred solution has been to encourage people to attend services in churches and mosques, insisting that prayers “can vanquish” the “satanic” virus.

While neighbouring countries have watched with mounting concern, the stunt by the former maths and chemistry teacher of sending samples from animals and fruit to the country’s main testing laboratory to undermine testing credibility has been baffling.

Calling for an investigation into the “dirty game” in the laboratory, he suggested that “equipment or people may be compromised”, hinting at “sabotage” in a speech broadcast on the state-run channel. What he did not address, as he ordered the firing of the head of the lab, was where the testing kits had come from or how accurate they are.

“I have always raised my suspicions about how our national lab has been conducting the Covid-19 cases,” the president said in a speech.

Like Trump, Magufuli is facing elections in the autumn and is no friend of his country’s media. He is a follower of charismatic Nigerian preacher TB Joshua, who subscribed to magical thinking predicting the virus would stop spreading on 27 March.

When that did not happen he revised his prophesy to say that he meant that the virus would stop spreading from Wuhan on that date. Perhaps equally worrying is how Magufuli (again like Trump) has used the pandemic to further his own political ends, including calling for self-isolating opposition MPs not to be paid.

The country has denied it has been weak in the face of the pandemic. “The claims that Tanzania has wavered and isolated itself in the fight against Covid-19 are not true because Tanzania has provided leadership in the economic bloc of the southern African countries (Sadc), which the country chairs, and it has continued to do so with respect and all efforts required,” said foreign affairs minister Palamagamba Kabudi.