CONSTITUTION – Life 11. Everyone has the right to life.
There is no doubt, the government ANC can not stop and do not want to stop farm killings, tortures and attacks.  Create own neighbourhood security watch or like the old ‘Commando’ system that previously worked in rural areas – our own people, the veterans can run the system, our previous army included in that system.   Link the farm and cities/town security systems together, like a puzzle.

The man that ruled South Africa currently is part of the ANC – Ramaphosa denied farm attacks and farm tortures and killings.   Even land expropriation without compensation.  He is also in charge (rule) the Commission on Black Economic Empowerment – B-BBEE and EE – discrimination and racism.

According to “legal experts” or constitutional writers of 1996 and their views, the SA Constitution is a “so-called ” democratic constitution  which is supposed to protect human rights.  That means, who are actually being protected now.

After 1996, that did not happen. Separate areas, for example, are still there, on the contrary, there are now more segregation – they call their areas CPA and trust areas and each CPA has registered leaders, which we as tax payers must maintain.   They get income, whether in the CPA or tourism industry, and of course all the traditional leaders get their salaries. So, why would they be worried about attacks, tortures and murders – they believe their ANC leader. There are 8840 traditional leaders (2018 Hansard) and all are reimbursed from the state coffers.

Murders are incited by ANC-EFF leaders who sing that we are being murdered, but the “judiciary” finds it is not “racism or discriminatory”.     And, Black empowerment, (B-BBEE and EE) said it is their right to have it.   It is against the international treaties as well.    We are SA are all minority groups of people, but there is definitely discrimination against only the whites.

VIOLATIONS OF HUMAN RIGHTS – A RIGHT TO LIVE

Human dignity
10. Everyone has inherent dignity and the right to have their dignity respected and protected.

Life
11. Everyone has the right to life.
https://www.justice.gov.za/legislation/constitution/SAConstitution-web-eng.pdf

Ramaphosa denies the killings of farmers in South Africa for the international community. Do you want to know what is happening in South Africa watch The Boer Project:
https://www.youtube.com/watch?v=EQOqCi2ubjU

If the ANC change their liberal communist constitution, they can do what they want, without compensation – not only land, ALL properties, as well as shares, everything.
Ramaphosa : “Farmers/Whites are thieves” – accusations > expropriation 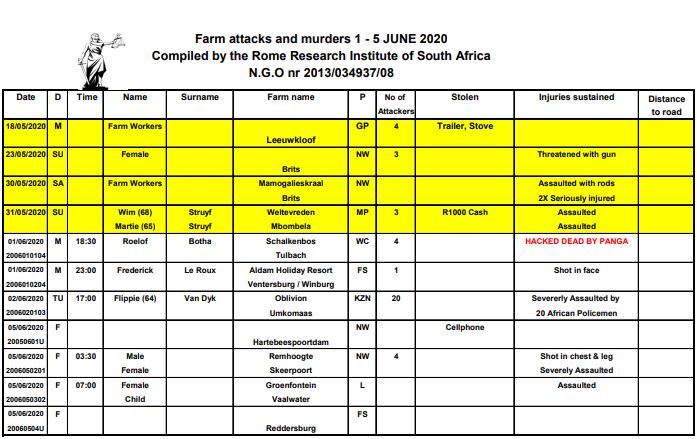 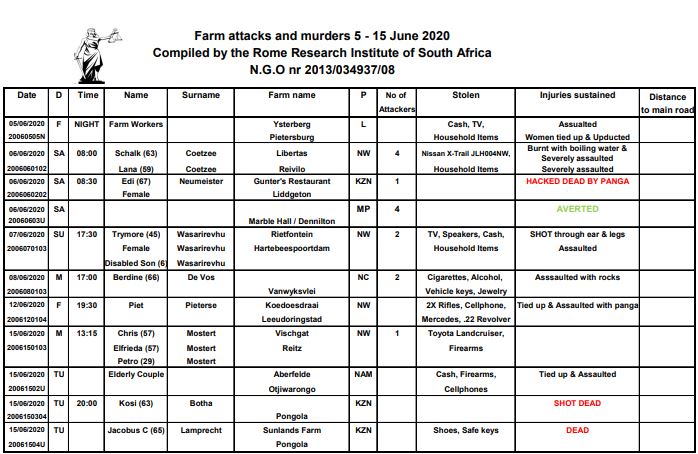 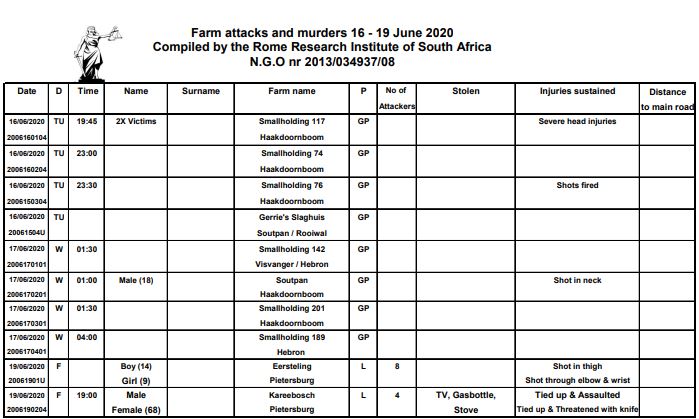 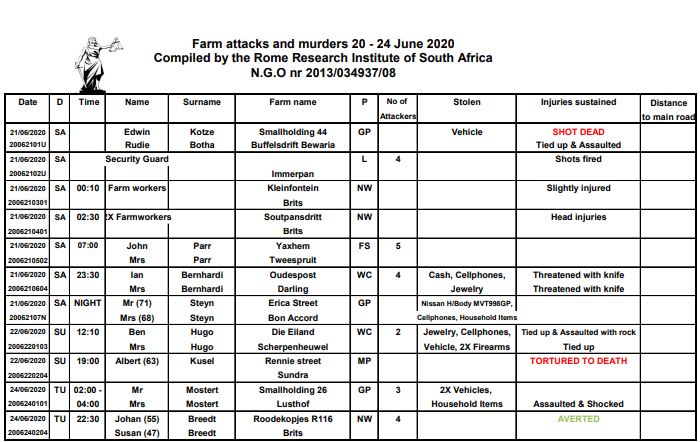 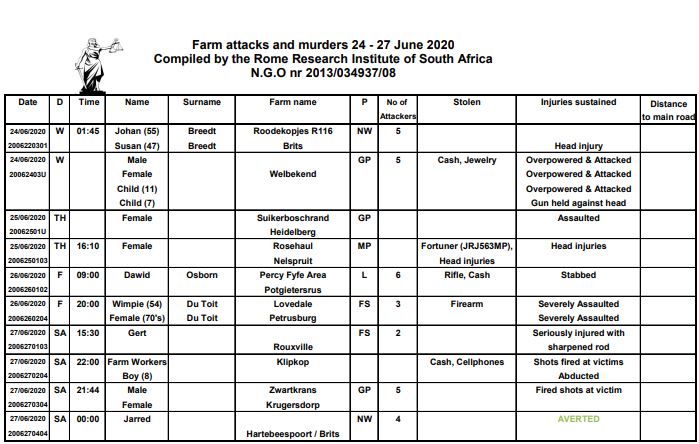 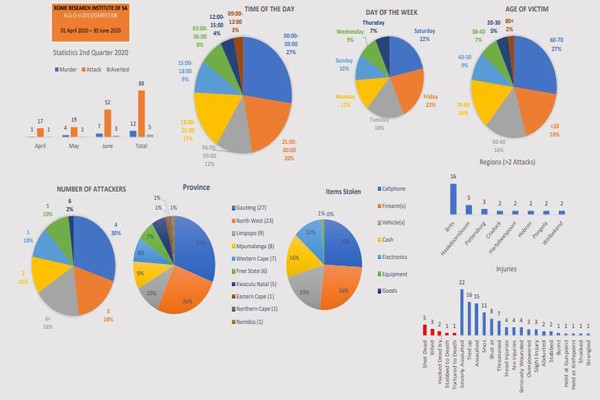 Thousands of white South African farmers have been brutally murdered by blacks and, No there have been no riots, no destruction and no mayhem as a result. And YES, these are racially motivated murders! Black leaders in the country openly call for these racial murders. And its not only the farmers, scores of other innocent white people have been murdered by blacks. Nothing is being said about it and towns are not been destroyed by angry mobs over it. So why no outcry from the world and why no major media drive about ‘these’ racist atrocities and why no demonstrations?

The major mainstream media outlets are part of the world liberal movement and as a result don’t drive issues that don’t suit their narrative, whilst, for example, driving the George Floyd incident in America does just that and helps further their cause, in this case, to remove Trump and to create one world without borders. (Floyd was an habitual criminal who was high on drugs that caused a heart attack.)

We all know by now, the liberal controlled social media networks similarly decide what will be shared and whilst blacks openly post about the killings of whites and while other other suitable left agenda is promoted, you will find that any other posts not fitting this narrative, are deemed to not ‘meet community standards’ and are removed or you cant share them.

Only a few to mention …

Jeffrey Zetler, who was well known in the local community, was stabbed to death on Saturday afternoon.   A Stellenbosch farmer was murdered at the weekend in what’s been called the first attack of its kind in the area.   Head of the Stellenbosch Community Policing Forum, Dr Carol Puhl-Snyman says Zetler was attacked by two men wearing balaclavas and when he resisted they stabbed him twice, once straight in the heart.

The Democratic Alliance is calling on the Gauteng MEC for Community Safety, Faith Mazibuko, to urgently intervene in what the party believes is an increase in farm attacks.   This follows a number of attacks in the north of Tshwane being reported in the last 48 hours.  Meanwhile, the South African Police Services says police visibility in the area has been intensified.
https://www.enca.com/news/farm-attacks-spike-during-lockdown

Gauteng – This follows seven incidents of farm attacks in 24 hours within a 15-kilometre radius at the Onderstepoort smallholding farms.   Cases of house robbery, attempted house robbery and attempted murder have been opened at the Pretoria North Police Station.   In one of the incidents, two people sustained head injuries, and, in another incident, an 18-year-old boy was shot in the neck.   These incidents are some of many that indicate that farmers are under attack by criminals, yet the ANC-led government is doing nothing to ensure their safety.
https://www.da.org.za/2020/06/7-farm-attacks-within-24-hours-in-onderstepoort-north-of-tshwane-raise-major-concerns

According to the report, KZN, the Free State, Gauteng and Limpopo had the highest number of farm murders.

Free State had 11 murders followed by Gauteng and KZN which both had eight murders.

KZN had 39 farm attacks, an increase of 16 from the previous year.    Police Ministry spokesperson Lirandzu Themba said the SAPS was intent on tackling crime in rural and farming areas. This commitment was demonstrated by the revamping of the National Rural Safety Strategy plan now aimed at enhancing community-police partnerships, she said.   The police have also introduced rural safety priority committees. This, Themba said, would see an increased police capacity and resources.   “These committees will monitor incidents of violent crime and together with police plan interventions.  “It will also collaborate work at national, provincial and district levels to ensure safety in rural communities. Whether it be on foot or by air, in vehicles, motorcycles, quad-bikes or on horses, this strategy will see crime-prevention measures go where they have never gone before by focusing on hot spots in rural areas to turn the tide against crime,” Themba said.

DA MP Dianne Kohler Barnard, who has recently been tasked to head the party’s rural safety work stream, said: “These aren’t crimes of passion, or drunkenness, or anger. They are coldly and carefully planned and executed invasions characterised by sheer brutality.”

“Minister (Bheki) Cele says we don’t need specialised rural safety units, because the Rural Safety Strategy is working.
REALLY?   If that is working, why are there attacks, tortures and killings – also a person in denial.

Earlier this month, Midlands farmer Edi Neumeister, was hacked to death on his farm.   Neumeister, 69, was the owner of Gunther’s Sausages, a popular eatery specialising in Swiss sausages and German beer on the Midlands Meander.   He was in his workshop when a panga-wielding man attacked him.    At least nine attacks have been recorded thus far.   Pappa said the DA has repeatedly called for more action from the provincial government when it comes to the protection of KZN’s farming and rural communities.

From 15/06/2020 to 26/06/2020 at about 15H30, there were 28 ATTACKS AND 3 MURDERS. These attacks are accompanied by extremely heinous acts and murder and rape and abuse and extremely brutal assaults are the norm of the day. Preparedness is no longer good enough.

ARMOR YOURSELF ACCORDING TO THE ABOVE ACTIONS.

You are and remain the first line of defense. You will be exposed to 4 to 14 heavily armed brutal sadists who do not hesitate to kill or mutilate people.

Arm yourself thoroughly and fight FIRE with FIRE. Send this message to everyone on your list. Be warned for the upcoming weekend 26/06/2020 – 28/06/2020. Specifically Saturday night and Sunday.