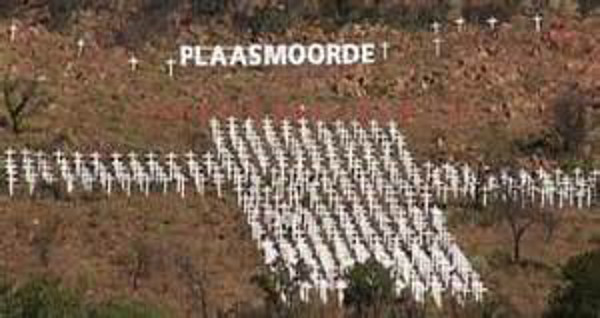 A shocking picture under the so-called lockdown with how many thousands of “army” around.    Seven farm attacks and or attempted attacks and house robberies took place between 19:45 on 16 June and 04:00 on 17 June 2020, in the Haakdoornboom, Onderstepoort in the area of Pretoria North, Gauteng province of South Africa. Several people have been seriously injured and or shot during these attacks. An 18 year old boy was also shot in the neck.

Agricultural union TLU SA has recently published farm attack statistics kept by them since 1990 with their records indicating 5437 farm attacks since 1990 and 2067 farm murders. These are only statistics they could gather from their own members. All farmers have never belonged to TLU SA, so the real number of farm attacks and murders are much higher.

These attacks are actively encouraged by ANC and EFF politicians on a regular basis. Many white children and women were also murdered in these attacks, many white people horrifically tortured and many women raped. It amounts to a slow racial war encouraged by the ANC and EFF. In fact tens of thousands of white people were murdered, raped and maimed by black men since the ANC took over with very few black people murdered by whites.

All murders are wrong and intolerable.

But why is the onslaught against South African whites ignored by the world and liberal media and only white on black incidents played up?

ROLL CALL FOR VICTIMS OF BLACK ON WHITE VIOLENCE IN SOUTH AFRICA IN THE TIME OF THE GEORGE FLOYD #FAUXRAGE AND GLOBALIST REVOLUTION STOKING.

May 2020 – Brutal Murder of a 78-year-old lady, Mrs. Patricia Orpen which lifeless body was found by her daughter in her bedroom with multiple injuries to the body on the farm Morgeson in the Cradock district.
https://www.graaffreinetadvertiser.com/News/Article/General/elderly-woman-murdered-on-cradock-farm-202005060135

A farm attack took place on Friday 29 May 2020, during broad daylight on the farm De Kloof, in Cradock, Eastern Cape province of South Africa. Jess de Lange was outside her home at 11:00 when she was attacked by a man with his face covered, who held a knife to her throat.   The woman kicked the attacker and managed to free herself from his grip, she then fled into the house and activated the alarm. The alarm caused the attacker and his accomplice to flee the scene.

– 1 June 2020 – Community medical doctor Roelof Botha (59) stabbed to death with sheep shears by a group of attackers in a nature reserve in Tulbach , Western Cape. Botha stayed on a farm in the area.                        – 2 June 2020 – Tinus Pretorius (37) shot 4 times and left in a critical condition in his Klerksdorp shop.          – 4 June 2020 – Kobie Smit (60) and his wife Annie Smit (58) were seriously injured when a black man attacked them with a panga on Thursday at around 1800 in the neighbourhood Panorama, Bethlehem, Free State province. Kobie was outside in his yard when the man chopped him with the panga, walked past him and also chopped Annie inside the house with the panga. The man fled without taking anything and the couple’s neighbour discovered them and rushed them to hospital.
– 4 June 2020 – In a second incident in Bethlehem on the same day, a black man broke a window of a house where a 60 year old woman and her daughter were watching TV at around 2115. The man stabbed the older woman in the neck, grabbed a laptop and fled with it through the same window . She survived the incident.
– The previous week a 86 year old woman were attacked and raped, also in Bethlehem town. She heard a window break and was surprised by a black male attacker who detained her with a knife, cut her clothes off with it and then raped her. He stole money and groceries before fleeing.
– 5 June 2020 – Pieter Nel (65) was left in critical condition after he was shot twice on his farm in Hartbeespoort on Friday, 5 June. His wife Ann was seriously assaulted.
– 6 June 2020 – An elderly white couple, Schalk (63) and Lana Coetzee (59), was also severely assaulted on a farm outside Reivilo, Northern Cape on Saturday 6 June, 2020. The man was left in critical condition. His attackers, black men, poured boiling water on his back. Both had to undergo surgery afterwards. An image of a bloodied Lana Coetzee was sent into the world .
– 9 Jun 2020 – Mike Sebanz (52) shot in the stomach by armed robbers and he later died in the Tembisa hospital. He and another staff member were guarding the Kempton Park golf club during the night. They worked in the bar.        – 11 June 2020 – A top medical specialist had his skull cracked by crowbar wielding home invaders in Somerset West around midnight.
– Many more less serious farm attacks happened during this time where white residents were nevertheless assaulted for instance at Nelspruit, Barberton, Cradock and Vanwyksvlei.

– All these incidents came amidst the longest and hardest CCP- virus lockdown in the world implemented in South Africa at the end of March. Ridiculous rules and regulations were forced on South Africans and almost a quarter of a million of South Africans were arrested for trivialities. The ANC gave state financial assistance to only some small businesses forced to close during the lockdown but only if the owners were black.

No food parcels were given by the ANC government to white people in need although there were many, for instance a whole small impoverished town called Venterspos in Gauteng which is extremely poor and where the little income there was vanished through the lockdown.

– The lockdown is happening amidst an ANC government which is looting on an industrial scale through capturing the State through it’s cadre deployment policy and causing collapsing infrastructure like sewage treatment plants. Four male residents of Koster in North West died on 5 June 2020 when they tried to open a blocked sewage pipe and were overpowered by sewage gasses. The local ANC run municipality collapsed a long time ago and does not render services anymore. The men who died were Chris Pretorius, Connie Cloete and 2 black men employed by Chris namely Mpho Melatho and Lennox Thobeni.
– Afriforum also had to lay hate speech charges against the guardians of the legacy of Nelson Mandela after the Nelson Mandela Foundation made the following remarks on 10 June : “The use of violence can be rational and carefully targeted as part of a strategy to counter structural and other forms of violence against Black lives. And, of course, it ought always to be so.”

The press release by the Nelson Mandela Foundation seems carefully aimed at giving consent to violence to be used in the liberal – globalist revolution which was long planned with George Soros as chief financier (OSF.SA). Of course the globalist Alliance seized upon the death of George Floyd to elevate him to icon status and pick up the pace of globalist revolution.

Cato Institute of George Soros – How many liberals / classical whites are with him?

Nelson Mandela is regarded as an icon so if his foundation gives consent to violence it wil be seen as legitimate violence taking into account that Nelson Mandela has been elevated to Saint status by the world – although he is certainly co-responsible for the filthy dictatorship the ANC has turned South Africa into because he must have been aware what kind of party of outright criminals he is presiding over. The world will be ashamed the day when the extent of structural discrimination against the white minority by a black government of South Africa becomes known. That and the extent of the violent attacks and atrocities committed by black on white in South Africa. And it will be.

The attackers use the same Modus Operandi and fit the same descriptions.
Incidents for the period:

At 19:45 two people suffered severe head injuries during the invasion and attack on plot 117. They were then robbed.

At 01:30 in the Visvanger/ Hebron area on plot 142, a home was invaded at this stage it is unclear the extent, if any, of the injuries sustained.

At 01:30 the fence was cut and window broken at plot 201 in an attempted house breaking.

There is no other information available at this stage. SAPS Pretoria North are investigating. There have been no arrests.

A farm attack took place on the morning of 17 June 2020, in Walkerville, in the Gauteng province of South Africa.

A brutal farm murder took place during the night on 15 June 2020, in the Pongola area of the KwaZulu Natal province in South Africa. Kosie Botha (63) a well known farmer in the area was attacked and brutally murdered by an unknown number of attackers in his home on his farm.

The attacker hacked Eduard Neumeister (67) into pieces with a panga on his kitchen floor… The attack happened last Saturday morning 6 June, 2020 on a farm at Balgowan, KZN Midlands. Edi was the owner of Edi’s Bratwurst Sausage Restaurant and B&B. The attacker also attacked Edi’s fiancee Margit Riebler and Edi fought to protect his fiancee. Then the black attacker started to hack Edi before he fled. Paramedics and Police members on the scene said they never saw such horrific injuries.

The incident has been picked up by European media because Edi was an Austrian by birth. His son Tommy stays in Germany. Incidents like these only make the news overseas when foreign nationals are involved.

In fact tens of thousands of white people were murdered, raped and maimed by black men since the ANC took over, with very few black people murdered by whites, which is the global norm. All murders are wrong and intolerable. But why is the onslaught against South African whites ignored by the world and liberal media and only white on black incidents played up? This is clearly part of an agenda and the Black Lives Matter campaign should be called out for what it is – like LGBT, antifa, feminists, etc, they are a weapon to destabilize communities in order to allow communists and the Liberal World Order to take power and oust Trump, because clearly they are not going to be able to do it via the ballot box. This after all is how the ANC won the elections with such a large margin since 1994!

A farm attack took place on 15 June 2020, at 13:15, on the farm Visgat, between Reitz and the Kransfontein silo in the Free State province of South Africa. A number of firearms and a Toyota Land Cruiser were robbed during the attack. 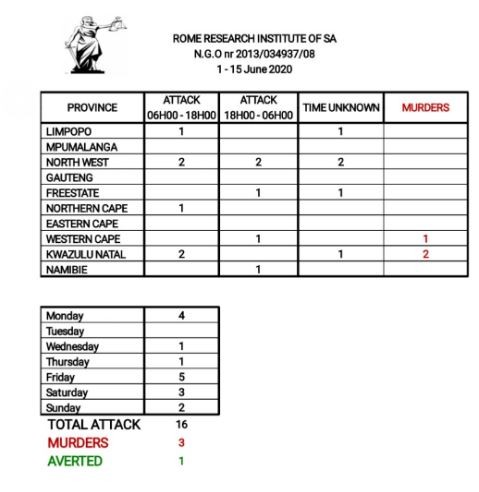