The Sahara is the largest hot desert in the world, and the third largest after Antarctica and the Arctic.    It spans an enormous area of 3.6million square miles – about the size of China or the USA.     There is also Waw and Namus volcano.   It means “oasis of mosquitoes“, a reference to the small lakes around it and the numerous mosquitoes that exist at Waw an Namus, nurtured by the lakes at the volcano.   This scenic volcano remained unknown to the outside world until it was reported by Karl Moritz von Beurmann (1862) and Gerard Rohlfs (1881), although they never visited the volcano.

Lapierre was a military officer who was captured in combat and taken in captivity to Kufra via Waw Al-Kabir and Waw An-Namus, and so had the opportunity to report his adventure after his release a few years later.

About eleven years later an Italian geologist, Ardito Desio, reached Waw An-Namus during his famous long camel journey. On his geological expedition, Desio also visited Jalu, Maradah, Waw Al-Kabir, Tmassah and Kufra and published a geological description of the volcano for the first time in 1935.

The surrounding terrain is very flat and, when approaching, the volcano can only be recognised by the black ash-fall and lapilli tuff deposits which surround the collapsed depression for a distance of about 10 kilometres, in stark contrast to the light-coloured sand and Eocene carbonates that are exposed in the adjacent area surrounding it.

In 2012, Jacques-Marie Bardintzeff and others published a comprehensive geochemical and mineralogical study about the volcano. They dated the Waw An-Namus volcano for the first time indicating that the age of the cone is 0.2 Ma (200,000 years old).  The chemistry of the analysed specimens was reported to be under–saturated foidite, representing the most extreme compositions among Libyan and Tibestian lavas. Compared to the other volcanic fields in Libya, the Waw An-Namus volcano is believed to have been active during the effusion of the last episode of Al Haruj, or less likely at much later time.

This Dark Eye in the middle of the desert is easily viewed from space and is a hub for tourists, whom camp at the top of the volcano away from the mosquitoes at the surrounding lakes or in a nearby camping ground.   Waw an Namus stands 547 metres high and is located south east of Sabha, in the southern Fezzan region of Libya.
https://the-earth-story.com/post/97291360679/waw-an-namus-often-said-to-be-the-eighth-wonder-of

Within the Saharan Desert is a large structure measuring 6 kilometers across which contains numerous concentric circles. This feature is a 6 kilometer wide impact crater which formed while the area was a green grassland. Known as Tin Bider crater, it provides an excellent example of a complex crater within the African continent. This video will discuss this crater, how it formed, and mention what effects its formation had.

Secrets of the Sahara: Mauritania’s Dark Side

Can you love a country that has no water, that has no flowers, that gives her children only buffalo’s milk to drink, and whose hens lay eggs so strangely flavoured and so mysteriously coloured. 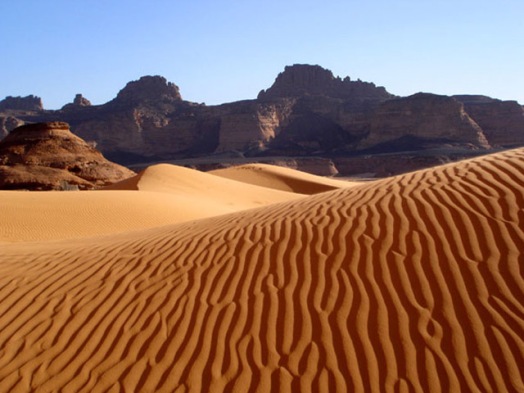 Who really knows …. it was not always a desert.

The remains of thousands of fish have been uncovered in the hot and arid Sahara Desert, dating back just a few thousand years.   These ancient sea creatures will have swam across huge lakes once common across the Sahara region.  That’s because the Sahara isn’t always a desert – and regularly reverts to lush grassland over the millennia.   Fish are a rare sight in today’s Sahara, but would have once been common. 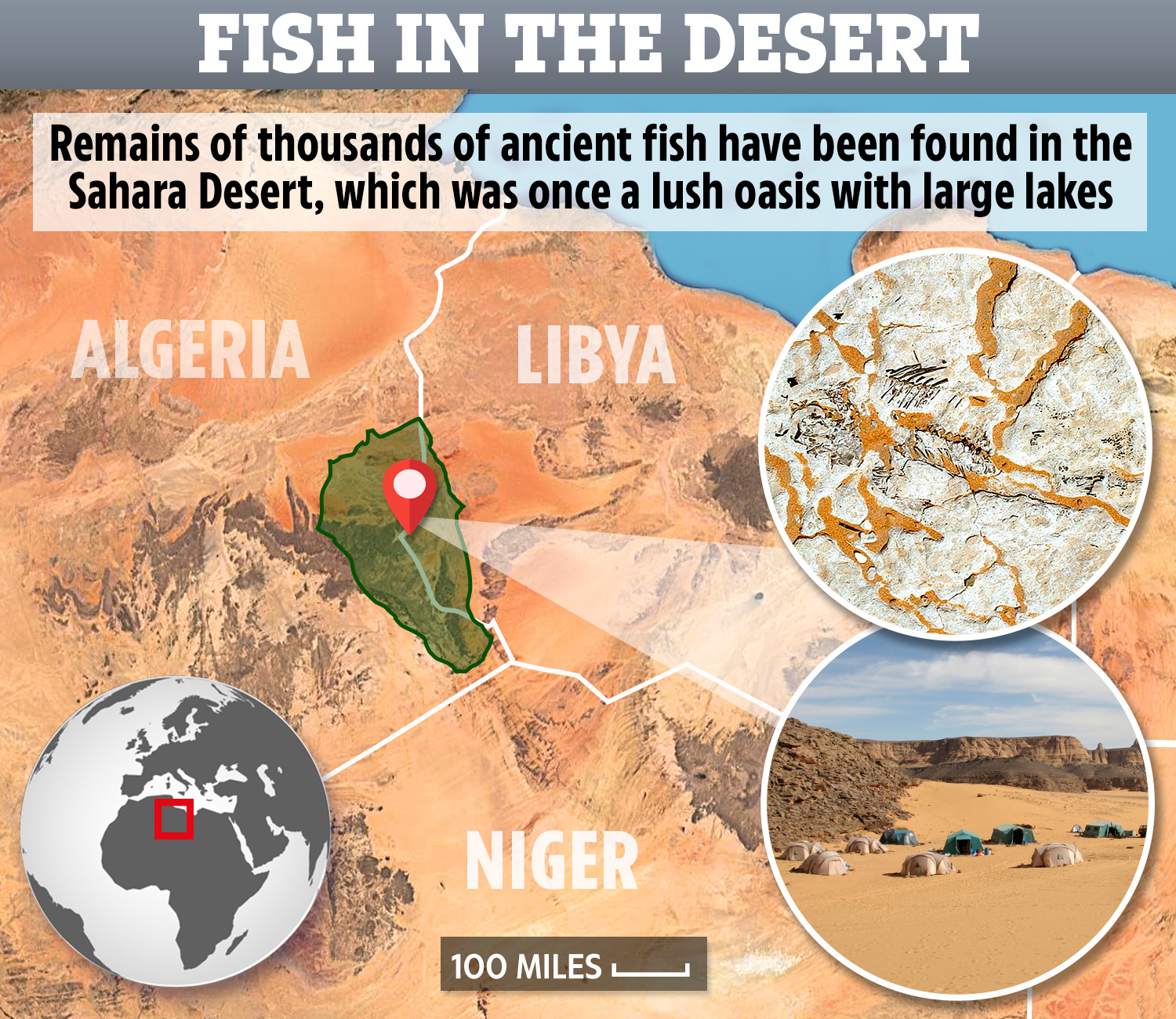 And of these, fish made up a staggering 80% of the finds.   A further 19% were mammals, while the remaining 1.3% were birds, reptiles, molluscs and amphibians.    All of the fish are believed to have been human food refuse, according to scientists at the Sapienze University of Rome.    That’s because excavators found cut marks and traces of burning.
Fish species found at the site included catfish and tilapia.   And the findings date back to a water-rich period in Saharan history, between 4,650 and 10,200 years ago. 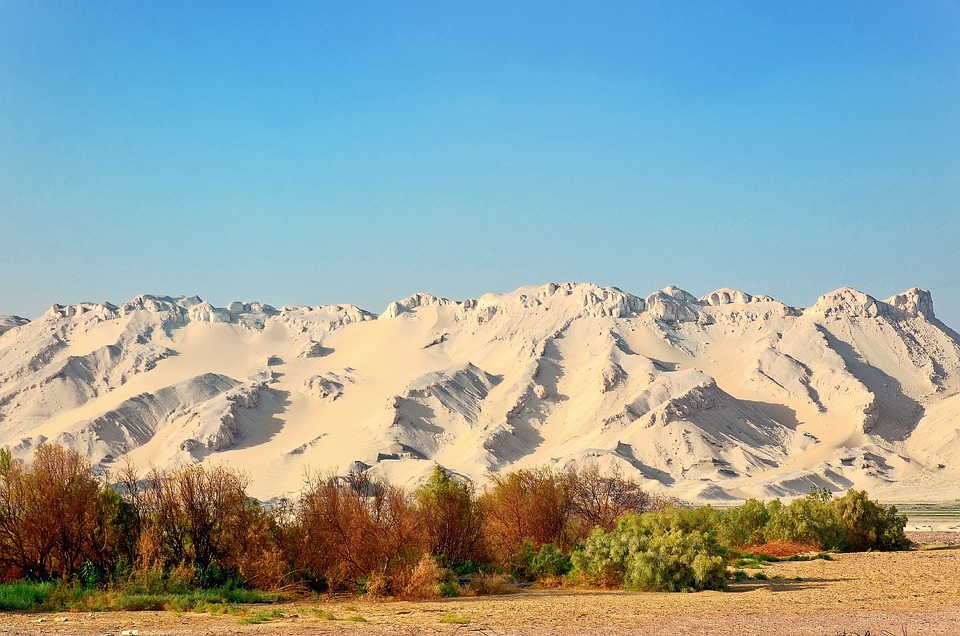 The vast desert country veiled from the East by fear, prejudice and misunderstanding. Adams follows in the wheel tracks of Ancient Rome’s ‘chariots of fire’ – the first wheeled vehicles to cross the Sahara and discover a little-known land of exotic brilliance, ancient cities and forbidding deserts.

There are at least 140 known tribal networks in Libya, many of which subdivide into several branches and clans. Most Libyan surnames carry the name of the tribe which they represent, and therefore one can easily identify a person’s tribe simply by knowing his surname. For example, colonel Gaddafi comes from the Gaddadfa tribe – an Arabised Berber tribe of the ancient Greater Syrtis region, now known as Sirte or Sert.

In Zuwarah the tribal name is also assigned to the street in which the tribe exclusively lives. Such names were officially replaced by the ousted colonel with Arab names, including the name of Zuwarah itself, but Zuwarans still to this day use the ancient names they learnt by heart. Seemingly the time has finally come for the Arabs to contemplate protecting their own identity rather than in-vain insist on persecuting others’.

The Libyans are mostly friendly people, regardless of their ethnic background, colour or social status. They respect privacy wholeheartedly and generally will not hassle foreign visitors and guests as is the custom nearby. The Libyan population is estimated at over 5 million people, plus under 1.5 million migrants, giving a total of 6.5 million people approximately. The Arabs are the majority inhabitants of today’s Libya, who brought Islam to the region when they first arrived from Arabia during the seventh century (640 AD).

The Tuareg Tribes of The Sahara

The Tuareg are the native inhabitants of the Sahara desert, in North Africa, since immemorial time, and there are no records of anyone else inhabiting the Sahara before them. The Tuareg Berber tribes of the Sahara are known by various names including the local Tuwareq (الطوارق), Tuareq or Twareq, and the international forms Twareg, Tauareg, Tuwareg, Tuarek or Touareg, all of which are the plural form of the singular name Targi.

By nature they are nomadic tribes, moving from oasis to another in search of pasture and water, with settled groups in the oases, like Ghat and Ghadames in Libya. The Tuareg are a Berber group of tribes who speak Tamazight language, which is a Berber language belonging to the Afroasiatic (Afrasiatic) or Hamito-Semitic linguistic family; and hence they call themselves Imushagh (“The Speakers of Tamazight [‘Berber Language’]”). The Tuareg have a number of variants for the name Tamazight, mainly Tamaheqt, Tamasheght, Tamajeght or Temesheght.

The Tuareg territories are divided into various confederacies or federations, each of which originally had its own traditions and tribal laws. Traditional Berber government consists mainly of an egalitarian council of elders (the old people of the community), who meet to discuss and decide the affairs of the community. The above map lists the Tuareg confederacies as Saltanate or Sulthanate.
https://www.temehu.com/tuareg-confederacies.htm

Tribes of the Sahara

We will meet the nomads that inhabit this land, learn about their fascinating customs, their atavistic rites; the birthplace of an ancient empire. They are the ULAD EL MIZNA, the Children of the Cloud.  In exile, the Sahrawi nation has, with the few available resources, managed to create a rudimentary but efficient system of administration. The population, some 170,000 people, has organised itself into WILAYAS and DARÍAS, assemblies of neighbours at which they discuss the problems of the community.

The Wadi Takarkori region where the discovery was made is already being described as an “untapped treasure” with hundreds of sites awaiting excavation. Tafuri and her colleague Savino di Lernia began excavating the archaeological site between 2003 and 2006.  Other archaeologists have also uncovered huts, animal bones and pots with traces of the earliest fermented dairy products in Africa.

Around 130,000 to 100,000 years ago the Sahara desert was not the sea of sands it is today. Instead, three large rivers created green corridors that linked sub-Saharan Africa to the Mediterranean and could have provided a safe means of passage for migrating ancient humans, according to a new study.

A gigantic geological structure in the Sahara Desert of Mauretania, which is seen in this satellite image, is measuring approximately 50 km (32 miles) in diameter.   It is known as the Richat Structure and has been a familiar landmark since the earliest space missions.   It is one of the most unique rock formations on Earth and it is called  the ‘bulls eye’ by space stations.  The structure, which is clearly visible from space, is located between the Tiris Zemmour and Adrar (in the northern-most region of Mauritania) and surrounded by thousands of square miles of nearly featureless desert.

More than one face  emerge from the landscape when seen from the air.   Located in southeastern Alberta, Canada, near Medicine Hat, this great geological wonder can only be seen from high above the ground.   Nevertheless, its humanoid details are stunning when one considers that human hands took no part in shaping this large mass of rock. The profile was formed by the erosion of rainwater on layers of clay-rich soil.   Do they speak.