(Dr Stanton of Genocide Watch): Genocide is a process that develops in ten stages that are predictable but not inexorable. At each stage, preventive measures can stop it. The process is not linear. Stages may occur simultaneously. Logically, later stages must be preceded by earlier stages. But all stages continue to operate throughout the process.   To attack, torture and kill. 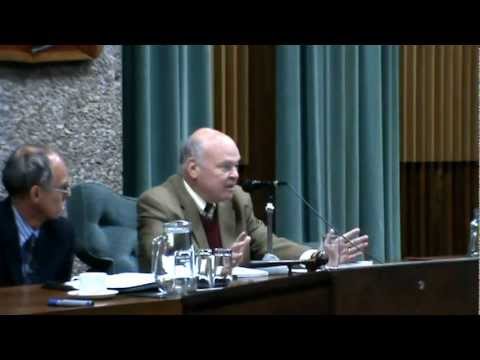 Witnessing the aftermath of the Cambodian Genocide in 1980, Greg Stanton felt called to make it his life’s work to bring Khmer Rouge leaders to justice. That calling grew into the Rwanda Tribunal and founding of Genocide Watch, a global movement to prevent future genocides.
Dr. Gregory H. Stanton is the founding chairman of Genocide Watch, the founder of the Cambodian Genocide Project, and Founder of the Alliance Against Genocide. Dr. Stanton is Research Professor in Genocide Studies and Prevention at George Mason University. He was the President of the International Association of Genocide Scholars. Dr. Stanton served in the State Department, where he drafted the United Nations Security Council resolutions that created the International Criminal Tribunal for Rwanda. He wrote the State Department plan on ways to bring the Khmer Rouge to justice, and drafted the rules of procedure for the Khmer Rouge Tribunal. He holds a Ph.D. in Anthropology from the University of Chicago, a J.D. in Law from Yale Law School, an M.T.S. from Harvard Divinity School, and a B.A. in Government from Oberlin College.

The United Nations defines genocide as “the deliberate and systematic destruction, in whole or in part, of an ethnic, racial, religious, or national group.” The term also includes actions other than simply wholesale slaughter, though. According to the UN, among the crimes that can constitute genocide are causing serious harm to members of a specific minority group; deliberately inflicting conditions on the minority aimed at bringing about its destruction in whole or in part; seeking to prevent births among the targeted population; and forcibly transferring minority children to others.

Refer to Dr Stanton, he visited South Africa twice and confirmed that too.

The brutality of the ANC

The ANC’s supporters employed a hideously violent method of execution known as “The Necklace”.

This method of killing involves placing a petrol-filled tyre over the victim’s head and shoulders.

The killers then set it alight.

ANC supporters used this savage method of execution on over six hundred people.

The victims were mainly black policemen and their families.

Also, ‘The Necklace’ is often used by black South Africans against black immigrants.

Nelson Mandela’s wife Winnie said: “With our box of matches and our necklaces, we will liberate South Africa”.

As a result of this attitude, such viciousness is commonplace in South Africa today.

In 2007, ‘Red Ken’ Livingstone (the London Mayor in 2007) decided to put a statue of Nelson Mandela in Parliament Square.

Nelson Mandela Statue: Is it now time to remove it?

South African Sonia Hruska, a former Mandela administration consultant who served as a coordinator in policy implementation from 1994 to 2001 before moving to the United States, told The New American that many or even most of those conditions have already been met — and any single one can technically constitute genocide if it is part of a systematic attempt to destroy a particular group. “Acknowledge it. Don’t deny it,” she said. Other activists and exiles agree.

Meanwhile, Hruska and other experts say that the government is encouraging the problem, actively discriminating against whites, and in many cases even facilitating the ongoing atrocities.

“Forced displacement from their farms has inflicted on the Afrikaner ethnic group conditions of life calculated to bring about its complete or partial physical destruction, an act of genocide also prohibited by the Genocide Convention,” Genocide Watch said in its most recent report. “In our analysis, the current ANC leadership also publicly uses incitement to genocide with the long-term goal of forcibly driving out or annihilating the White population from South Africa.”

Of course, not all South Africans — especially city dwellers — are convinced that there is an ongoing genocide in their country, or even that one may be coming. The vast majority of blacks and whites would simply like to live in peace with each other.

However, virtually everyone who is paying attention agrees that without solutions, the precarious situation in the Rainbow Nation will continue to deteriorate, going from bad to worse, sooner rather than later.
https://www.thenewamerican.com/world-news/africa/item/13280-genocide-communism-threaten-south-africa

Mandela started and it is still ongoing – George Soros financed all inside the country.

Without a doubt, Nelson Mandela was one of the towering figures of our times, a man who became a legend and cultural icon while still alive. Now that he is dead, his detractors are demonizing him while his followers are canonizing him.

Sen. Ted Cruz was quick to find this out after he issued a statement that Mandela would “live in history as an inspiration for defenders of liberty,” noting that “because of his epic fight against injustice, an entire nation is now free.” In response, some of Cruz’s followers wrote that Mandela was a “terrorist,” a “communist,” a “murderer” and more.

Cruz issued a solemn statement to mark Mandela’s passing on Thursday, but his diehard fans responded with vitriol, posting slurs describing the South African leader as a “terrorist, communist, scumbag and murderer,” in comments on Cruz’s Facebook page. 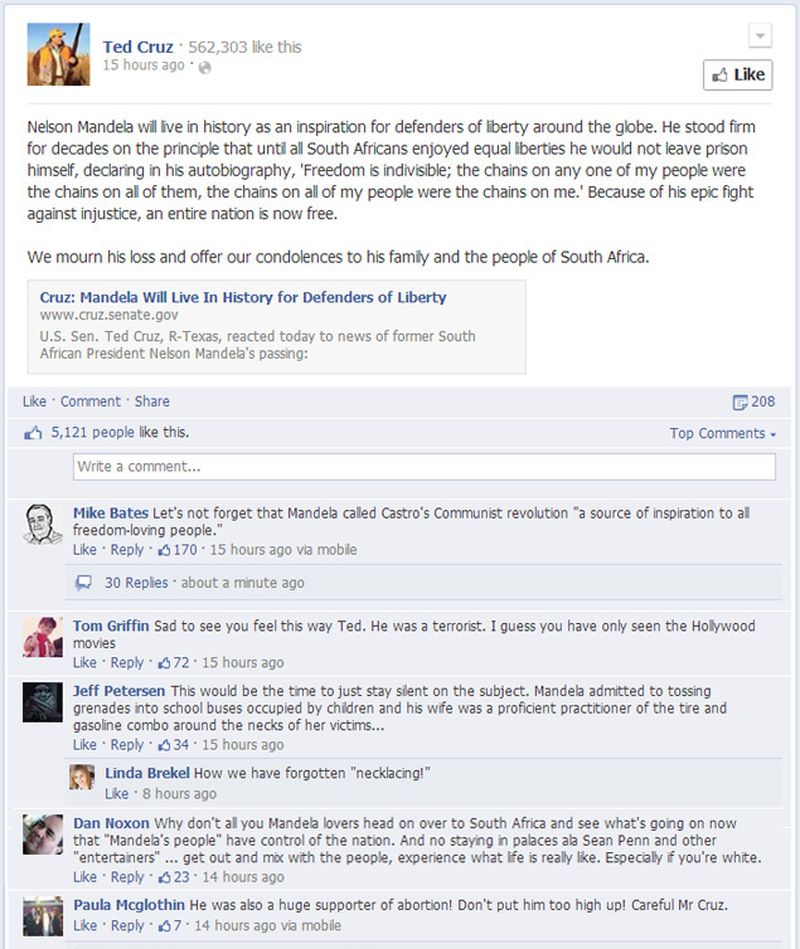 Who, then, was the real Nelson Mandela?

According to President Obama, “We have lost one of the most influential, courageous and profoundly good human beings that any of us will share time with on this earth.”   In the words of Bono, “Stubborn ‘til the end for all the right reasons, it felt like he very nearly outstared his Maker. Today, finally, he blinked. And some of us cry, knowing our eyes were opened to so much because of him.”    According to U.K. Prime Minister David Cameron, Mandela was “a hero of our time,” stating that “a great light has gone out in the world.”

But World Net Daily’s Joseph Farah urges us not to mourn for Mandela, writing, “He was a committed member of the South African Communist Party. He was a leader of the revolutionary African National Congress, which he helped to radicalize into an organization sworn to armed, violent attacks.”

He was not Martin Luther King Jr. He was not Mahatma Gandhi. And he was certainly not George Washington, as Barack Obama claimed.

He was a committed member of the South African Communist Party. He was a leader of the revolutionary African National Congress, which he helped to radicalize into an organization sworn to armed, violent attacks.

In other words, the world has been sold a bill of goods about Mandela. He wasn’t the saintly character portrayed by Morgan Freeman. He wasn’t someone fighting for racial equality. He was the leader of a violent, Communist revolution that has nearly succeeded in all of its grisly horror.

And while he overthrew the evil system of apartheid, Farah says, “Mandela’s revolution brought about … one in which anti-white racism is so strong today that a prominent genocide watchdog group has labeled the current situation a ‘precursor’ to the deliberate, systematic elimination of the race.”

According to Hammond, “1,000 Africans were killed by necklacing in the country through the ANC, an act where terrorists would ‘put an automobile tire over someone, pour petrol over them [and] set them alight.’”

Muehlenberg continues to say, “Hammond also described numerous other acts of violence that he alleges were committed by the ANC under the order or oversight of Mandela. ‘Missionaries and their kids [were] murdered, bayonetted on the fields—whole families killed by landmines planted in the roads,’ he said.”

And it is without dispute that Mandela signed off on acts of terror against the apartheid government, to the point that even the New York Times tempered its praises for Mandela.

Yet it is hardly a violent terrorist who states, “For to be free is not merely to cast off one’s chains but to live in a way that respects and enhances the freedom of others.”

And on a Facebook post, Messianic Jewish scholar Stuart Dauermann wrote, “I read his biography ‘Long Walk to Freedom’ and was particularly struck by his extraordinary self-control. When he was negotiating with the leaders of the Apartheid government which had so demeaned and oppressed him and all South African blacks, he writes that he utterly despised these people. Yet he learned their language, Afrikaans, and spoke to them respectfully because he judged it was more important for him to win freedom for all South Africans than it was for him to tell these men what he thought of them. All of this after 27 years of demeaning and cruel imprisonment on Robin Island where the white prisoners wore long trousers, but the blacks were required to wear shorts, as if they were children.”

When facing the death penalty in 1964, he famously said, “During my lifetime I have dedicated myself to this struggle of the African people. I have fought against white domination, and I have fought against black domination. I have cherished the ideal of a democratic and free society in which all persons live together in harmony with equal opportunities. It is an ideal which I hope to live for and to see realised. But if needs be, it is an ideal for which I am prepared to die.”

In short: 1) Mandela was a man who resorted to acts of violence and terror to overthrow injustice; 2) he was a man who stepped into the role of national and international statesman with dignity; and 3) he was a man who was more communist than conservative and whose legacy in South Africa remains mixed.

The Vula Connection is one of apartheid’s untold stories, and at its centre is an unusual hero, Tim Jenkin.
Liberalisme and Marxism in SA – #bolshevism

WHO KILL WHOM IN SOUTH AFRICA –

Elke volk het die reg tot selfbeskikking.    Thousands of our Afrikaners and Boers ( whites ) have been assaulted, tortured and murdered, especially farmers, we as people,  still have the right to continue to exist within our own independent territories, in which we have a right to elect our own leaders.
Genocide versus Self-determination