The State Capture commission, headed by deputy chief justice Raymond Zondo, has 180 days, which translates into roughly six months, to complete its work. On Monday, the commission held its first hearings – eight months after that first proclamation.   The Guptas, Zuma and his son Duduzane Zuma, the arms dealer and Gupta family lieutenant Fana Hlongwane, as well as his former chief of staff Lakela Kaunda and the former Public Enterprises minister Lynne Brown, were all lawyered up with costly senior counsel this week, showing that they are ready to put up a big and long fight against the Zondo Commission. 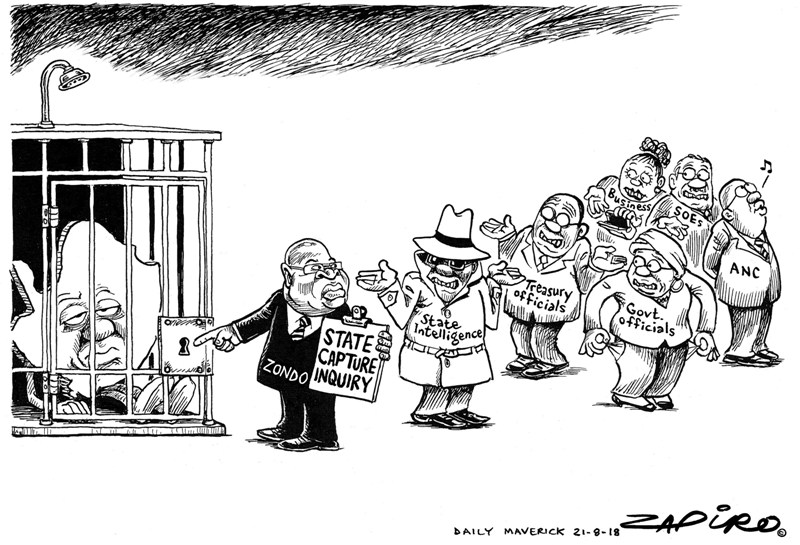 The inner ring of evidence the commission will hear is what the role of the Gupta family and Zuma were in offering Cabinet positions to former deputy finance minister Mcebisi Jonas and former ANC MP Vytjie Mentor – in other words, how was the national executive compromised or involved in State Capture.
https://www.biznews.com/leadership/2018/08/21/zondo-state-capture-probe-cyril-ramaphosa
A lot of the work has been done for the commission. In addition to former Public Protector Thuli Madonsela’s report into State Capture which undergirds the establishment of the commission, there are veritable libraries of inquiries and reports into State Capture, not only at national government level, but at enterprise and entity level too, much of which is vaulted in amaBhungane and Scorpio’s exposés and coverage of State Capture. If these reports are admitted into evidence, the process can be shortened.

The Indian-born Gupta family has a huge influence on South Africa’s former president Jacob Zuma. They have played a prominent role in his presidency and their relationship has been at the centre of corruption scandals. So who are the Guptas?

The Gupta family arrived in South Africa and within just over two decades had soared to the pinnacle of the country’s financial and political echelons. The expansion of their influence in government structures and leaders earned them infamy throughout the country. As the State Capture Commission begins on Monday, eNCA takes a look back at the controversial family’s arrival and ascension in South Africa and the destruction left behind as they fled the country.
https://www.youtube.com/watch?v=UWi50o1L31g
***
PARLIAMENT, 17 March 2016 – DA leader Mmusi Maimane pressured President Jacob Zuma on allegations the Gupta family was appointing ministers.

Johannesburg, 01 February 2016 – The National Union of Mineworkers claims that Eskom has unfairly awarded the politically-connected Gupta family a coal supply contract at one of its power stations.

Exxaro Resources was selling coal to Eskom at Arnot Power Station for R1,132 per ton for 40 years

2019 – Eskom meltdown
Greenpeace is calling for Minister Pravin Gordhan to cancel the last two units of Kusile, and shift investments into renewable energy before it’s too late

2018
Soweto alone owes R15-billion, and its residents consistently resist any attempts to force them to pay their power bills. Can the installation of prepaid meters solve the non-payment problem? Ted Blom from the Energy Expert Coalition and Cleopatra Shezi of the Soweto Electricity Crisis Committee discuss the issue

2018
The Hawks have refuted claims of an alleged impending arrest pertaining to the controversial Gupta brothers. The City Press reported that the Hawks, had obtained a warrant for the arrest, of at least one of the Gupta brothers. Hawks Spokesperson, Hangwani Mulaudzi says they are awaiting, a directive from the NPA. According to Mulaudzi, some investigations have not been concluded, and pronouncements of a possible arrest, will only be made after the process has been completed. The Assets Forfeiture Unit is expected to serve summons today, on Gupta linked Trillian and consultancy firm, McKinsey – for deals they had with Eskom and Transnet. Our Reporter Glorious Sefako-Musi takes us through a brief history of the Gupta family.

2017
Watch this video to see why OUTA thinks the price of electricity should be about 30c/kWh. The price went from 16.04c/kWh in 2004/5 to 86.6c/kWh in 2016/17. Eskom wants to charge 106.87/kWh in 2018/19. OUTA calculates that if the price had increased at the rate of the consumer price index (CPI) increases, electricity would now be about 30c/kWh. Instead, the extra revenue collected by charging more than 30c/kWh since 2005 is about R1 trillion. Eskom has justified the massive price increases as making prices cover the cost of producing electricity, including building new power stations which were supposed to have cost R93 billion. Since 2005, Eskom has spent R548.6 billion on capital expenditure. Remember, Eskom also got R83 billion in taxpayer handouts from 2008 to 2014

Lynne Brown accused of corruption at Eskom – 2017
Eskom board spokesperson, Khulani Qoma, has placed Public Enterprises Minister Lynne Brown at the centre of corrupt activities at Eskom. Qoma has outlined a list of dubious appointments and contracts allegedly made or approved by Brown. He is part of a team of Eskom executives and board members appearing before Parliament’s Portfolio Committee on Public Enterprises which is probing allegations of state capture at the parastatal.
https://www.youtube.com/watch?v=c8_BFl54_Xk