After difficult negotiations, the peace treaty between the Republic of Estonia and Soviet Russia was signed on 2 February 1920.

The treaty ended the Estonian War of Independence that had lasted for nearly a year and a half, and was one of the first major achievements in the field of international relations for the young Estonian state.

The treaty established Estonia’s eastern border, and Soviet Russia recognised the independence of the Republic of Estonia in perpetuity. The instruments of ratification of the treaty were exchanged in Moscow on 30 March 1920 and the treaty entered into force.

At the time, the Treaty of Tartu was, above all, a peace treaty, ending the carnage that began with the First World War.

The memoirs of William Tomingas, the secretary of the Estonian delegation, describe the solemn reception the delegation of the Treaty of Tartu received in Tallinn. Many people who had come to the streets to greet them took off their hats despite the bitter cold.    The head of the Estonian delegation Jaan Poska later remembered that for him, the greatest recognition for his work came from a woman standing on a street; she crossed herself and told him,

“You saved our sons”…

The “Baltic Tiger” is a term used to refer to Estonia in particular, as the richest and best developed country among the three Baltic States. According to data of the International Monetary Fund from 2016, Estonia has the highest Gross Domestic Product per capita (nominal) among them.

Ruled at various times during the middle ages by Denmark, the German knights of the Livonian Order, and Sweden, Estonia ended up part of the Russian Empire in the 18th century. It experienced its first period of independence in 1918, following the end of the First World War and the collapse of the Russian Empire.

In September and October 1939, the Soviet government compelled the Baltic states to conclude mutual assistance pacts which gave it the right to establish Soviet military bases.  In May 1940, the Germans invaded France, which was overrun and occupied a month later.  On 16 June 1940, the Soviet Union invaded Estonia. The Red Army exited from their military bases in Estonia, some 90,000 additional Soviet troops entered the country.    Given the overwhelming Soviet force both on the borders and inside the country, not to resist, to avoid bloodshed and open war.  Estonia remained a Soviet republic until 1991, when, along with the other Baltic states, it declared its independence. The Soviet Union recognized independence for Estonia and the other Baltic states on September 6, 1991, and United Nations membership followed shortly thereafter.

There are some regional linguistic and cultural differences among the ethnic Estonians; notably, the Seto people in southeastern Estonia speak a distinct dialect of Estonian and are part of an Eastern Orthodox religious tradition, while the islanders of the Muhu archipelago in the west also have their own dialect and share a number of cultural affinities with the people of Scandinavia.

Immediately after independence, Estonia began pressing the Soviet Union, and later Russia, for a speedy withdrawal of Soviet troops from its territory. Estonia insisted that the process be completed by the end of the year. The Soviet government, citing a lack of available housing for its troops, said not before 1994. In January 1992, some 25,000 troops were reported left in Estonia, the smallest contingent in the Baltic states. Still, more than 80,000 hectares of land, including an inland artillery range, remained in the Russian military’s hands. More than 150 battle tanks, 300 armored vehicles, and 163 battle aircraft also remained. The last troops did not leave until August 1994.

As the propaganda war and negotiations dragged on, Estonia and the other two Baltic countries gained international support for their position on troop withdrawal at a July 1992 summit of the CSCE in Helsinki. The final communiqué called on Russia to act “without delay . . . for the early, orderly and complete withdrawal” of foreign troops from the Baltic states. Resolutions also were passed in the United States Senate in 1992 and 1993 linking the issue of troop withdrawals to continued United States aid to Russia.

Territorial issues also clouded Estonian-Russian relations. Estonia continued to stick by its demand for the return of more than 2,000 square kilometers of territory annexed to Russia by Stalin in 1945. The annexed land was within the borders Estonia and Russia had originally agreed to as part of the 1920 Tartu Peace Treaty. However, the Yeltsin government disavowed any responsibility for acts committed by the Soviet regime.

Estonia alone will determine its future

That peace treaty became an official document in Tartu on 2 February 2020 when Jaan Poska, the Estonian statesman who was leading the Estonian delegation, and Adolf Joffe, the Russian diplomat and the leader of the Russian delegation, signed it. The treaty established Estonia’s eastern border, and Soviet Russia recognised the independence of the Republic of Estonia in perpetuity. The instruments of ratification of the treaty were exchanged in Moscow on 30 March 1920 and the treaty entered into force.

“On the basis of the right of all peoples freely to decide their own destinies, and even to separate themselves completely from the State of which they form part, a right proclaimed by the Federal Socialist Republic of Soviet Russia, Russia unreservedly recognises the independence and autonomy of the State of Estonia, and renounces voluntarily and for ever all rights of sovereignty formerly held by Russia over the Estonian people and territory by virtue of the former legal situation, and by virtue of international treaties, which, in respect of such rights, shall henceforth lose their force. No obligation towards Russia devolves upon the Estonian people and territory from the fact that Estonia was formerly part of Russia,” the Article 2 of the peace treaty said.

The Tartu Peace Treaty comprises 20 articles and in addition to ending the state of war it also includes articles on the recognition of the Estonian state, covering border, security, economic, social and traffic policies. According to it, Russia recognised Estonian independence de jure, renouncing voluntarily “for ever all rights of sovereignty formerly held by Russia over the Esthonian people and territory”. The Treaty of Tartu was also the first international act recognising the Soviet government. 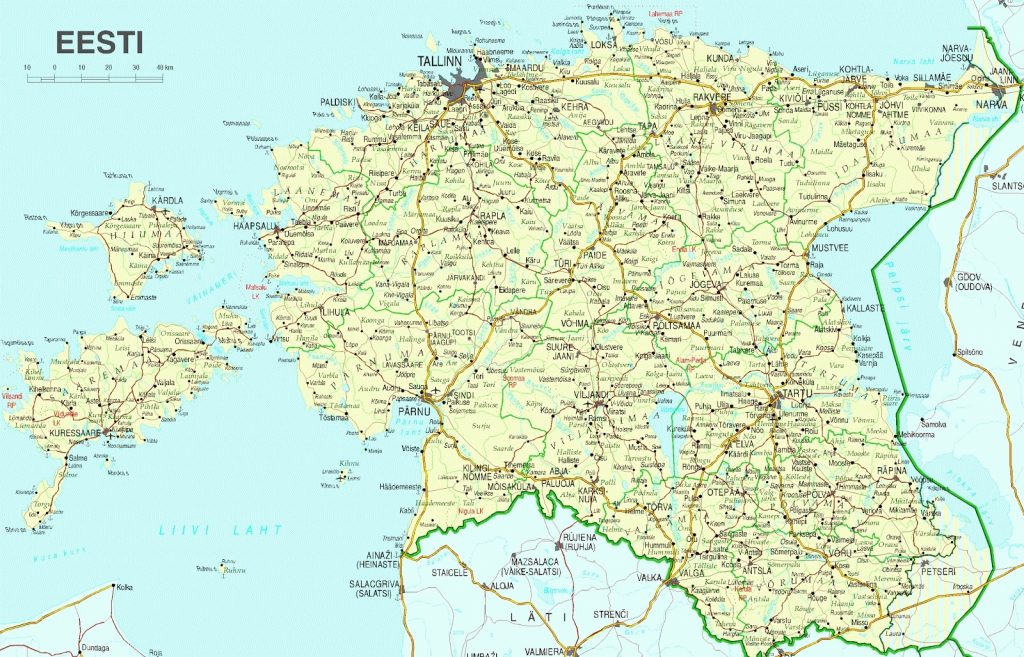 According to the treaty, every Estonian living in Russia had the right to move to Estonia. Based on that provision, 38,000 Estonians opted for the Estonian citizenship (at the end of the War of Independence, there were about 320 Estonian settlements or centres and around 190,000 Estonians in Russia).

Estonia’s peace treaty with Russia was the first international act that mentioned the right of peoples to decide their own destiny. Therefore, both the Treaty of Tartu as well as other treaties between Russia and its western neighbours that were modelled on it constituted an important step towards enshrining the nations’ right to self-determination in international law.

In May 2005, the two countries did sign a border treaty where Estonia conceded the still-occupied territories to Russia, but after the ratification of the treaty in the Estonian parliament, the Russian Federation withdrew its signature, pointing to the preamble of the ratification act of Estonia that mentioned the Tartu Peace Treaty. The two countries managed to sign the border treaty again on 17 February 2014; however, to this day, it hasn’t been ratified by either of the countries, making Estonia the only state in the European Union that shares a land border with Russia and doesn’t have a valid border treaty with it.

Pioneering significance in the international law

“The Tartu Peace Treaty had a pioneering significance in the global system of international law because it was the first international act in the world that explicitly cited the concept of the peoples’ right to self-determination,” Urmas Reinsalu, the Estonian foreign minister, said on 2 February at a high profile conference in Tartu, marking the anniversary. “The Tartu Peace Treaty, as well as the treaties between Russia and its neighbours Lithuania, Latvia, Finland and Poland that used it as a template, constituted a crucial step towards peoples’ right to self-determination becoming a part of international law.”

The foreign minister emphasised that the peace treaty is still valid.

The occupation of Estonia by the Soviet Union and Nazi Germany as a consequence of the secret protocol of the Molotov-Ribbentrop Pact resulted in the loss of a fifth of our population. The Republic of Estonia adheres to the principle of legal continuity in its international-legal actions and rejects any reading that contradicts it.”

Borders will no longer be redrawn

Estonian president Kersti Kaljulaid said in her speech at the anniversary conference in Tartu on 2 February that both the Estonian People’s Army and the country’s diplomats played a crucial role in the events leading to the signing of the treaty.

“The diplomat’s quill brought us success, but it moved in unison with the warrior’s sword as they shared a common cause. Neither one could have prevailed without the other. The Estonian People’s Force was what effectively protected our beleaguered land in 1918 and then proceeded to liberate it completely. Without this proper military presence, the voices of the Estonian diplomats in Paris, London and even Tartu would have sounded too feeble. If they would have sounded at all,” Kaljulaid said.

“On the other hand, the lengthy defense of Estonia would not have been possible without allies. Had it not been for the efforts of the Estonian diplomats, the courage and self-sacrifice of our soldiers would have amounted to nothing more than glorious noise amidst the gloom of strategic defeat, to slightly paraphrase an ancient military strategist. The Tartu Peace Treaty was a triumph of Estonian diplomacy!”

The president added that even today, having clear and coherent goals and staying true to its principles is the most powerful weapon in Estonia’s foreign and security policy.

Kaljulaid said the Tartu Peace Treaty “was, is and will remain the birth certificate of the Estonian state”. “At the same time, we must respect the international consensus on refraining from any further redrawing of the post-war borders in Europe. Arguments to the contrary only create unnecessary confusion,” she added, rejecting calls by some Estonian politicians who still demand re-establishment of the pre-war border between Estonia and Russia. “A country’s foreign policy cannot be driven by nostalgia and emotions, it must be balanced and rational,” the president said.

Perhaps unknown also to many Estonians, Finland and Soviet Russia also signed their own Treaty of Tartu (“Tarton rauha” in Finnish) on 14 October 1920, after negotiations that lasted nearly five months.

The treaty confirmed the border between Finland and Soviet Russia after the Finnish civil war and Finnish volunteer expeditions in Russian East Karelia. The treaty was signed in Tartu at the Estonian Students’ Society building. The treaty was broken by the Soviet Union in 1939, when it started the Winter War against Finland.

The Accord for our people’s selfdetermination was signed under the Interim constitution, and NOT the 1996 constitution (article 235).

The ANC signed the agreement in 1994 as well. We as a people, Afrikaner and Boer (whites) have an international right to rule over ourselves on all levels of governments.   International law stipulated that the ruling party, currently the ANC or any party such as DA or EFF and especially multi-culture parties cannot prescribe to peoples’ their way of freedom –  their members are multicultural anyway.

Why do we need our own independent country – because of the violations of our human rights, killings, racism and discrimination.

Peoples who are oppressed or colonized, however, have the right to external self-determination, which they may exercise through self-determination, from their mother state and to rule themselves, like any other country.   We did have independence in the past.  The ANC do have no right to kill our people and use black economic empowerment against only the White minority group of people.

Self-determination for the oppressed people