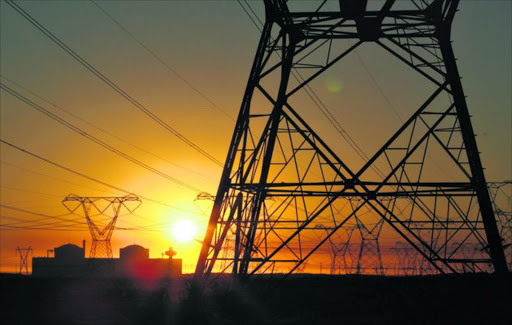 It was reported by Eskom on 22 May 2020  that three man were nabbed by police in Diepsloot in the north of Johannesburg for the alleged theft of ten Eskom transformers worth nearly R500,000, the power utility said.   The trio was arrested after security personnel, acting on a tip-off, discovered that an illegal construction, just a kilometre away from 11kV overhead power lines, was supplying informal settlements in the area.

Friday, 22 May 2020:  Three male members of the public were arrested on Thursday, 21 May 2020 for the alleged theft of 10 Eskom transformers valued at approximately R500 000, and for tampering with the network infrastructure in Diepsloot extension 13.

Cables and poles suspected to belong to City Power were also recovered at the scene.  Eskom security personnel acted on a tip off where it was discovered that an illegal construction of about one kilometre of 11kV overhead power lines were supplying informal settlements in the area. The suspects, who are members of the Diepsloot community, were subsequently arrested by the South African Police Services (SAPS).

“These arrests followed an extensive investigation through the collaboration of Eskom and the SAPS. This is part of an ongoing sting operation as one of the multi-pronged approaches to deal with any criminality that seeks to undermine Eskom’s efforts to supply electricity. We have recently implemented a rotational load reduction initiative in identified areas or networks that are regularly overloaded, and Diepsloot is one such area.  The load reductions are aimed at protecting Eskom’s assets from repeated failure and explosions, as well as curbing the rising costs that are a result of frequent equipment failures,” said Motlhabane Ramashi, the Senior Manager for Maintenance and Operations in Gauteng. The exponential increase in energy demand occurs during peak hours in the mornings and evenings due to the network overloads which cause failure of equipment and explosions. These are a result of illegal connections, meter bypasses and tampering with the electricity infrastructure in areas with high-population density and multiple and/or backyard dwellings.

“We would like to commend members of the public for their active citizenry by taking a stand against illegal activities that interfere with the security of supply and also compromise public safety due to exposure to unprotected electricity infrastructure.  Eskom is determined to safeguard and protects its assets during the lockdown period to ensure provision of service to residents and other essential services”, Ramashi concluded.

Tuesday 21 January 2020: Two suspects were arrested for allegedly trying to sell 293 kg of Eskom copper cable to the value of R30 000 to a scrap metal dealer in Booysens, Johannesburg.  The two appeared at the Booysens Magistrate Court on Monday, 14 January 2020 and have been remanded in custody for further investigations.

The owner of the scrap metal dealership called the Booysens South African Police Service (SAPS) as he became suspicious that the copper the duo was allegedly trying to sell him could have been stolen given its value. The SAPS responded promptly and arrested the suspects who had the copper in their possession.

The copper, which is now with the police, was stolen from an Eskom office in the south of Johannesburg. “The suspects gained entry to our premises by cutting the fence and subsequently overpowered and attacked the security personnel who were on duty at the time, fortunately no injuries were sustained. We wish to applaud the scrap metal dealership for his courage of acting against infrastructure theft,” said Motlhabane Ramashi, the Senior Manager for Maintenance and Operations in Gauteng.

Copper theft costs the economy between R5 and R7 billion a year and Eskom spends about R2 billion a year replacing stolen cables. Eskom continues to heighten security in hot spot areas across Gauteng as cable theft may lead to prolonged power outages and compromise the quality of supply, which affects businesses, essential services as well as the day-to-day lives of the society.

“We urge all those who may be aware of infrastructure theft to play a role in the fight against such serious crimes by sending their anonymous tip-offs to Crime Line on 32211.  We can all make a difference by preventing perpetrators of infrastructure and electricity theft from stealing by reporting them”, Ramashi concluded.

Some of the lead contractors at the problem-ridden Kusile power station project — including JSE-listed Stefanutti Stocks and the local subsidiary of multinational Tenova TAKRAF — made substantial payments to an apparent slush fund that was used to enrich top Eskom officials. These latest revelations provide yet another glimpse into the shady dealings at a project that is now five years overdue and has exceeded its original budget by a staggering R80-billion.

The four firms, whose respective Kusile contracts have a combined value of more than R10-billion, made the questionable payments to Babinatlou Business Services between November 2014 and May 2018. A further eight smaller Eskom contractors made less substantial deposits into the account.

After receiving payments from the contractors, Babinatlou channelled at least R50-million towards then Kusile contracts manager France Hlakudi and two of his former Eskom colleagues. Hlakudi was by far the biggest beneficiary of the monies that exited the Babinatlou account.

The Special Investigating Unit is probing 11 contractors for stealing a staggering R139 bn during the building of Eskom’s Medupi, Kusile and Ingula power plants.  And insiders say the total cost of Eskom looting could reach about R500bn, dating back to 2005.

SIU spokesperson Nazreen Pandor said the unit was probing the theft of R170 bn from Eskom — R139bn of which is directly related to  contractors working on the power plants.  She said that after an “intensive scoping exercise” the unit had prioritised, among other things, investigating “the performance of, and payment made to the value of more than R139bn to 11 identified contractors appointed by Eskom in respect of the Medupi, Kusile and/or Ingula station”.

This makes up a massive chunk of the R334 bn spent on building the plants — and suggests that public enterprises minister Pravin Gordhan’s estimate last year that about R100bn was lost to state capture was way below the mark.

The application, which is brought in the public interest in terms of section 157(1)(c) of the Companies Act 71 of 2008, focuses on the violation of fiduciary duties and gross negligence on the part of former board members and was served on the following parties: