Times reported during December 2018, about Eskom’s bad debt, mismanagement and failing plants, the troubled power utility has seen its fair share of blows this year, leading to questions about the sustainability of the state-owned entity.    The total debt for Eskom climbed by 14% to R419bn in the past six months (until the end of September). According to Business Day, the power utility’s service-cost debt doubled to R45bn in a year.   Despite only generating R26bn from operations, Eskom’s profit also dropped from R6.3bn to R671m in 2017. The power utility’s primary energy costs increased by 12% to R46bn and employee-benefit expense grew by 12% to R16.9bn.   And the salaries are sky high. 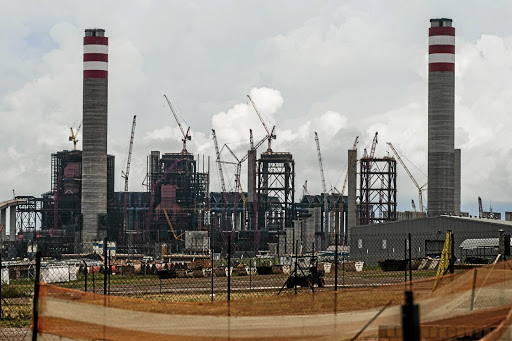 Exiting chief executive Phakamani Hadebe, who will step down from the company at the end of July 2019, will receive a final paycheque of R8.6 million for his one year on the job, while chief financial officer, Calib Cassim will receive R3.24 million.

Cassim’s pay as CFO is significantly less that his predecessor, Anoj Singh, who took pay of R9.4 million in 2018.

The other 13 members of Eskom’s group executives received a total payout of R44 million, down from R51.6 million last year. Included in the group payout are two notice payments of R6.4 million for executives who are leaving.

“Eskom has 47,000 megawatts of installed capacity. Its plans to cut down operations, whether as a power station or units within power stations, was supposed to be 7,500 megawatts. Instead, what we’ve had is, in addition to the 7,500, somewhere between 9,000 and 11,000 megawatts of breakdowns. We have potential for 47,000, but can only supply about 26,000.”    Gordhan said several units at the Medupi and Khusile power stations had failed to generate the expected 7,000 megawatts into the system.

Financial performance
The group EBITDA of R45.4 billion (2017: R37.5 billion) shows a healthy increase of 21.1%. The group reported a net loss before tax of R2.6 billion  (2017: R1.1 billion profit) mainly due to a substantial increase in depreciation and net finance cost. The EBITDA margin improved further to 25.6% from 21.2% in 2017, mainly due to a reduction in employee benefit expenses and other operating expenses.

The electricity sales of 212 190GWh were 0.9% lower than the previous year. The main reasons for the decline were as a result of self-generation by customers, customers using electricity more efficiently and that switched to alternatives energy sources as well as reduced exports to SADC countries due to good rainfall. There has been an average 0.4% decline in sales volumes per annum since 2013. Revenue was R177.4 billion (2017:
R177.1 billion) for the year and increased on average at 7.4% per annum since 2013.

The overall employee benefit expenses before capitalisation decreased by 11.1% from R36.8 billion in 2017 to R32.7 billion in 2018. The main reason contributing to the decrease is because no performance bonuses were provided on the 2018 financial year performance.

Other operating expenses reduced by 22.9% to R18.2 billion mainly due to a reduction in the power station decommissioning provision as a result of a revision to the decommission strategy of nuclear spent fuel and better methods to decommission power stations.

Depreciation increased to R23.1 billion (2017: R20.3 billion) mainly as a result of new plant that was put into commercial operation.

Finance cost after capitalisation increased to R26.0 billion from R19.6 billion in 2017. This is mainly attributable to increased borrowings and a reduction in borrowing cost capitalised due to plant brought into commercial operation.

Funding
Funding of R55.5 billion was used for investment activities and R44.5 billion to service debt. It was funded by cash from operations of R37.6 billion, debt raised of R58.0 billion and utilisation of cash resources of R4.4 billion. The liquidity position, comprising cash and cash equivalents plus investment in securities, was R22.7 billion at 31 March 2018. This highlights the challenge that, while Eskom generates adequate cash to meet its
operational requirements, it has to borrow to service debt and for investment activities.

The board approved a borrowing programme of R72.1 billion for the period 1 April 2018 to 31 March 2019, of which 22% had been secured by June 2018. Potential funding sources  have been identified and plans are being pursued to secure the rest of the required funding.

Between 1970 and 1994 Eskom embarked on a massive build programme, adding
33910 MW of new generation capacity to its fleet. With the support of a R19.1 bn
subsidy from government, a favourable exchange rate, and open-ended forward
cover from the SARB, the costs of constructing new power stations were relatively low
(Steyn, 2003). With the additional capacity coming on-line, the country had
accumulated surplus electricity generation capacity.

The Department of Public Enterprises firstly explained the government’s financial assistance package, noting that a R23 billion equity injection would be provided, subject to approval by Parliament. For its part, over the next 100 days, Eskom management would focus on ensuring its financial viability, improve its operational performance by prioritising critical maintenance, with the aim of doing maintenance without load-shedding, and ensure accountability at all levels of management.

The two options that had been considered for building long-term sustainability, were highlighted, and it was noted that in September 2014 the government had approved a tariff increase to be determined by the National Energy Regulator of South Africa, coupled with an equity injection of R23 billion.

It had also asked Eskom to raise additional debt of R52 billion, and to make certain operational improvements.

In 2008, government had given Eskom a R60 billion subordinated loan for the purposes of debt consolidation, following its credit downgrade by ratings agencies, part of which was equity, and part loan – around R27 million at 31 May 2015. Complete conversion of the loan to equity was critical to improve Eskom’s credit rating and free up additional borrowing capacity.

Eskom briefly outlined the progress of the capital expenditure programme of R280 billion over the next five years, at Medupi Unit 1 and Sere Wind Farm. The current load shedding was a result of a maintenance backlog, and its current financial state was a phase in a cycle associated with periods of capital expenditure.

Load-shedding had been experienced in the 1980’s, before a cash- and supply-positive period lasting until about 2005, and it was anticipated that Eskom’s downward trajectory may continue for the next three years.

Government should invest in new generating capacity and maintenance in cash-positive peak periods, so that the inevitable troughs did not become crises.  The load-shedding was then explained.

Eskom’s installed generating capacity currently stood at 43.5 gigawatts (GW). On a typical winter day, demand was around 32 GW and planned maintenance around 6.5 GW, but unplanned maintenance could cause generating capacity to fall below demand, resulting in a need for load-shedding. Ideally, for Eskom to be able to conduct maintenance without load-shedding, Eskom needed spare capacity of around 9.5 GW. Eskom outlined its current balance sheet, noting that its primary operations were cash-positive, but there was a cash shortfall of around R70 billion when loans, interest and capital expenditure were taken into account.

When offset, however, by money raised through bonds, and the government’s equity injection of R23 billion (in two instalments), this took Eskom back to a positive closing balance of around R15 billion. That equity injection was to be added to its capital expenditure. 40% of the capital expenditure budget was being put to building of new generation capacity, with a focus on Kusile Unit 1 and Medupi Unit 5.

At Medupi, 10 000 of the 12 000 striking workers were back at work and the partnership agreement had been reviewed to achieve stability. Majuba was back at 80% capacity and the units of Ingula pumped storage would come online in the current and the following financial years. Pre-payment of electricity was important to Eskom’s cash position.

The Chairperson noted that the delegations from the Department of Public Enterprises (DPE or the Department) and Eskom had been invited, as recipients of the funding contemplated under the Eskom Special Appropriation Bill [B16-2015] and the Eskom Subordinated Loan Special Appropriation Amendment Bill (2008/2009-2010/2011 financial years) [B17-2015]. The Committee had already been briefed on the Bills themselves. He noted that, despite an invitation, nobody was present from the Portfolio Committee on Public Enterprises.

Mr McLoughlin asked for a statement of Eskom’s total debt.